Dana Point is a coastal city in southern Orange County, California. With a population of about 34,000, it has one of the few harbors along the Orange County coast, and with ready access via State Route 1, it’s a popular local destination for surfing. 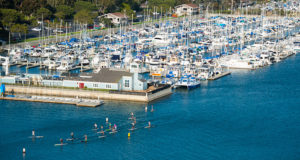 The city was named after the headland of Dana Point, which was in turn named after Richard Henry Dana, Jr., author of Two Years Before the Mast, which included a description of the area. Dana described the locale, including neighboring San Juan Capistrano, as “the only romantic spot on the coast“.

Although Dana described the anchorage as poor, it is now a developed harbor and contains a replica of his ship, the Pilgrim. The Pilgrim is used as a classroom by the Ocean Institute, which is located at the harbor. This area is designated California Historical Landmark #189. 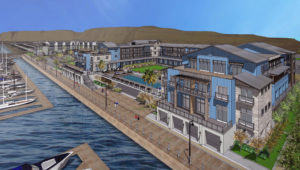 The supervisors unanimously agreed to have county officials negotiate with Dana Point Harbor Partners, which has plans for 77,178 square feet of restaurants and outdoor dining, 31,949 square feet of retail space and a 9,000- square-foot surfing museum.

The $200,000,000 plan (which reportedly involved about $20 million in public subsidies) also calls for 2,296 marina slips, 388 spaces for dry-stack boat storage and valet boater slips between the stores and a 130-room boutique hotel and lower-priced 136-room hotel. 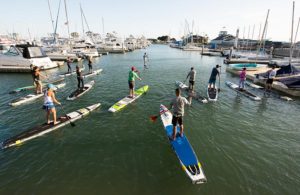 Jim Miller, who has operated Coffee Importers for 37 years and is president of the Dana Point Harbor Merchant Association, said Tuesday’s vote was pivotal for the future. “Today was like putting 18 years on the line in one morning,” he said. “The merchants are relieved that the decision’s been made in the process of revitalizing the Dana Point Harbor and is now moving forward.”

James Lenthall, president of the Dana Point Boaters Association, said his group has developed a strong relationship with Dana Point Harbor Partners, “and we look forward to building upon this foundation as we work together to give our boating community the world-class harbor we deserve.”

On July 18, 2018, the Orange County Board of Supervisors approved a $330 million agreement to revitalize Dana Point. “To get this thing to move forward is very momentous,” Jim Miller said. “I mean it’s a milestone and a county effort and it’s a big project.”

The county is now entering into a 66-year lease with three private developers that make up Dana Point Harbor Partners.

See article by Erika I. Ritchie in the Orange County Register.

See article by Ashley Ludwig in the Laguna Niguel Patch.