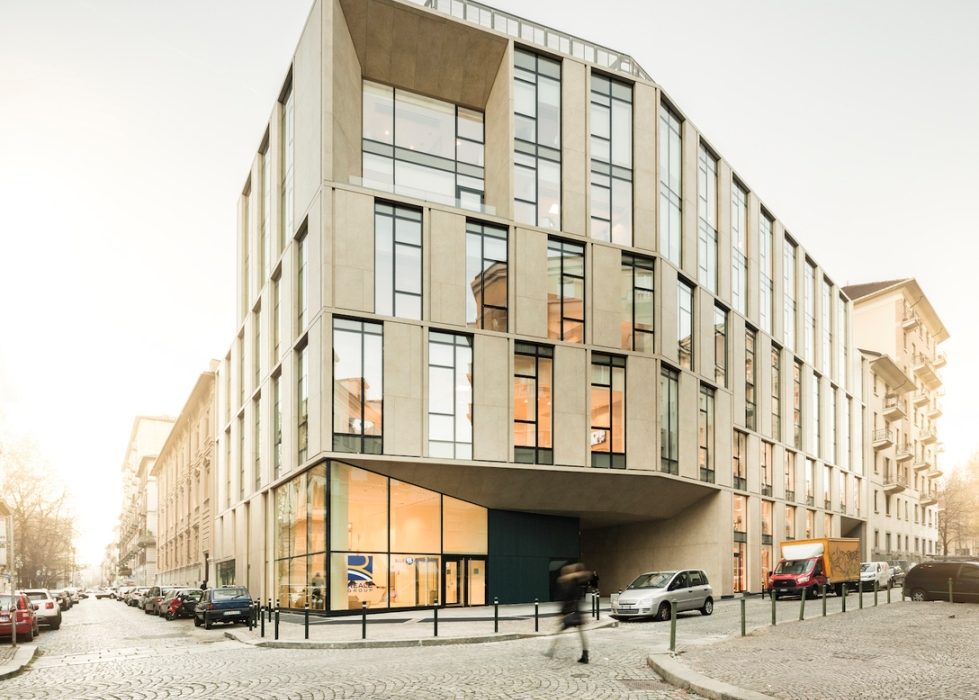 Infill projects, by their very nature, should be revitalizing. They transform empty, lifeless spaces into assets that increase beauty and/or productivity. 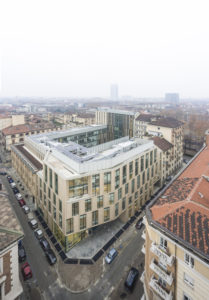 But infill projects in historic neighborhoods are fraught with peril, because everyone has a different idea of what is appropriate. Some say the new building should perfectly mimic the architectural vernacular. But others decry such modern copycats, saying they devalue the genuine historic buildings, and create an artificial, “Disneyland” effect that sacrifices authenticity. Such cheap imitations can even encourage the demolition of genuine heritage.

Some are happy if the façades bear a superficial resemblance to surrounding structures. But others say that the goal should be the complement the neighborhood, and that can be done with a sensitive modern design that contrasts harmoniously with older neighbors, so that old and new enhance each other.

In Torino (Turin, in English), Italy designers at Iotti + Pavarani Architetti have done a lovely job of both enhancing and blending into the historic center of the city with an infill project that created the new operations headquarters of the Reale Group.

It opened in October of 2016, and is located not far from Piazza Castello. The new spaces accommodate 800 work stations, 150 car parking spaces and a conference room for 280 people. It is an important and ambitious project aimed at ensuring innovative standards in the building performances but also focused on generating a new urban redevelopment process through attentive dialogue with the city. 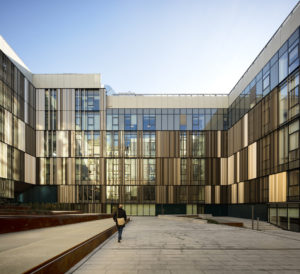 The architecture defines a contemporary insertion in the heart of the historic center: a new construction that represents a significant replacement project achieved without taking up additional land, into which Reale Immobili has invested 50 million euros. The new innovative and highly comfortable offices cover a built area of 23,500 square metres, giving form to a building that redefines the urban block highlighting the presence of an internal courtyard covering 1,700 square metres, visible from the street front.

All the spaces help to achieve an excellent quality work environment and define an urban campus that exists in synergy with the historical site. Certified as class A2, the new complex complies with all the highest energy standards and has the characteristics to attain the international LEED Platinum certification.

The architects Paolo Iotti and Marco Pavarani, together with a group of designers from Artecna, have redefined the urban block through a project that involves the volumetric organization and design of the external façades and those facing onto the internal courtyard. The entire complex takes on board the surrounding area and “absorbs” a protected historical façade (that on Via Bertola and Via San Dalmazzo), creating a compositional solution in harmony with the surrounding buildings. 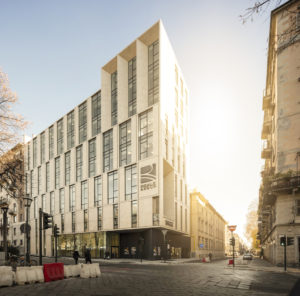 The architectural envelope becomes a fulcrum, a gravitational hub in the urban fabric of this part of the surrounding centre of Turin: it focuses the attention on itself and, through a simple and rigorous arrangement of the four façades, defines a contemporary intervention which is at the same time intimately linked to the place, simultaneously generating the conditions for high energy efficiency and excellent exploitation of the light.

As a counterpoint to the external envelope exposed to the urban context, a more transparent and subtle façade surrounds the internal courtyard, which fits with the furnished garden. A clad counterfaçade system with shaped profiles of anodized aluminium in different colours screens the doors, windows and glass partitions creating the effect of a vibrant “artificial forest” sensitive to changes in the natural light.

All images courtesy of Fernando Guerra.