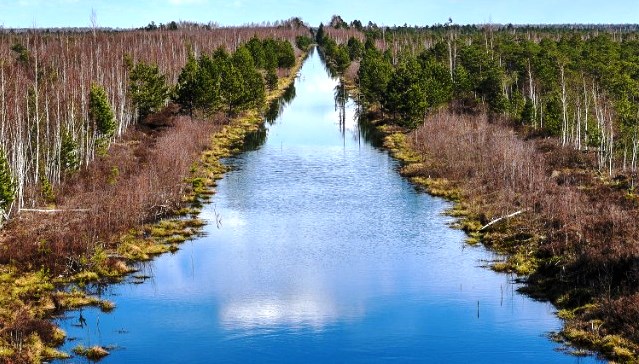 The recent social media “10-year challenge” has gone viral, with people worldwide posting photos showing how the environment has been damaged by climate change and other invasive human activities.

Ten years ago, Belarus could have provided a stark “before and after” picture showing how once lush and healthy wetlands had been drained, burned and effectively left for dead.

A decade later, however, the situation has been dramatically reversed.

Belarus, “The lungs of Europe”, is known for its primeval forests and wetlands, which cover nearly half the country. However in recent decades, hundreds of thousands of hectares of peatlands have been drained for peat extraction and agriculture.

Peat is the most efficient way to store carbon on land, and it does so in vast areas all around the planet. It’s the world’s second-largest carbon sink after the oceans. Peat bogs can store on average 10 times more carbon per hectare than forests.

So, restoring peat bogs has ten times the climate restoration effect of reforestation.

Belarus has 233,000 hectares of drained and damaged peatlands, the result of large scale drainage and peat extraction that began in the 1960s. They are of little economic use and, exhausted of their benefit, have switched from greenhouse gas-absorbing carbon sinks to carbon emitters.

Large areas of drained forest peatlands can no also longer be used effectively for forestry—drainage drastically lowered the water table which in turn meant a drop in biodiversity amongst the species that depend on peat for their homes and food.

Bringing peatlands back to life 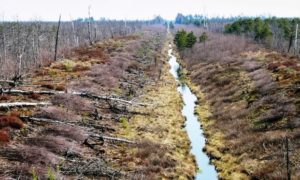 The photo at the top of the page shows this peatland in 2018, after restoration. Here it is drained and dying in 2008.

Belarus is among the world leaders in the practice of ecologically restoring peatlands. With United Nations Development Programme (UNDP) and other international support, 51,000 hectares have been restored there since 1999.

UNDP together with its partners and the Ministry of Natural Resources and Environmental Protection of Belarus has launched six large-scale projects to restore and sustainably manage wetlands.

The first large Global Environment Facility (GEF)-funded restoration was launched in 2006 in the Halaje peatland, in the Cherven district of Minsk.

The peatland was drained in 1960-1963, however even though it was not used for agricultural, forestry or peat extraction, the drop in water levels mean the upper layer of peat dried out.

This led to peat fires, the vital water-retaining sphagnum moss dying off and the wild cranberry fields suffering as rosemary, heather and birch took over.

The most severe fires happened in 1976 and 1999 when more than 70 percent of the Halaje peatland was burned.

In 2006-2007, a special project was developed by UNDP and GEF to revitalize the peatlands, restore biological diversity, and decrease carbon dioxide emissions.

What a difference a decade makes

In order to prevent water escaping from the bog, two main canals were blocked with four soil dykes. A stoplog gate was constructed at the central canal. Monitoring in 2008 revealed the necessity for extra water-regulating facilities. The work was successfully completed in 2009.

Today all hydrological works are functioning, and maintain the correct water levels. After the ecological rehabilitation the peatland began to absorb up to 888 tons of carbon dioxide per year. And the successful methods used on the Halaje and other Belarusian peatlands are now widely copied in Belarus and other countries in the region. A law specifically protecting peatlands has been drafted and is expected to take effect in 2019.

The restoration of the Halaje ecosystem has stopped fires, greenhouse gas emissions, and improved biodiversity and air quality.

Now, elk have returned and are flourishing in their natural habitat. Heather has been replaced by sphagnum and cranberry, and locals come back to collect wild berries, as they used to in the past.

The original version of this article by Aliaksei Artsiusheuskii, Alexander Kozulin and Katsiaryna Yakubenka originally appeared on the UNDP blogsite. Reprinted here (with minor edits) by permission.