Kenya’s population is rapidly growing and urbanizing, which is driving a soaring demand for charcoal in the country’s main cities. Studies show that charcoal production increased between 1.6 to 2.5 tons a year between 2004 to 2012, while revenues grew from $0.3 to $1.6 billion in the same period.

Most wood used for charcoal production is sourced from trees on farms. It is estimated that around 40 percent of wood fuel, which includes both charcoal and firewood, is unsustainably harvested, causing negative impacts on Kenya’s biodiverse forests.

This situation is aggravated by poor governance that is more prohibiting than enabling.

But a solution is cooking in Baringo County, one of the Kenya’s charcoal production hotspots, located about 200 km northwest of Nairobi.

Mathenge (Prosopis juliflora), a shrub that has long caused nightmares for local communities, is providing an alternative source of wood to produce sustainable charcoal while supporting the livelihoods of rural households in drylands, which happen to be hurt more by the vagaries of climate change. 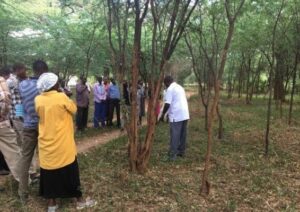 Prosopis juliflora, also known as mesquite, was first introduced to Kenya in the mid-1970s with the objective of countering rangeland degradation and providing a source of firewood for rural families. At first, the alien species made life better for dryland communities because it grew on barren landscapes, reduced soil erosion and dust storms, providing shade and pods for livestock.

But it soon started spreading incredibly fast — between 500 to 1,300 hectares per year. Its tough thorns caused physical injuries, its sweet pods caused goats to lose their teeth – leading livestock owners to sue the government of Kenya — mosquito invasions increased and human settlements were displaced.

In a 2011 report, scientists estimated that mathenge now grows on 2 percent of Kenya’s land area (citation below), causing countless losses of grasslands, woodlands, cropland and settlements.

By using this species elsewhere throughout the country for charcoal production as an option to manage the uncontained spread of mathenge, the existing Prosopis juliflora could provide a biomass of 37 million tons suitable for charcoal use.

This could improve the living conditions of over half a million people directly employed in charcoal production and trade – a potential game-changer to sustainably meet Kenya’s thriving demand, with potential surplus for export.

In 2018, World Agroforestry (ICRAF) conducted a household survey across Baringo county, finding prevalent unsustainable practices in charcoal production – one of the main economic activities in the region.

First, the survey revealed that the majority of landowners who source wood for charcoal did not carry out any kind of tree management. For example, they did not thin or cut down some stems or branches to promote growth, reduce formation of thickets (in the case of Prosopis) or replant when they cut native species.

Second, it showed that all charcoal producers used traditional earth mound kilns (TEK) which produce low yields, result in wood waste and result in cutting more trees down than necessary.

Taking into consideration Baringo’s pressing need to manage the spread of mathenge, ICRAF set off to promote “Prosopis charcoal” to support farmers and charcoal producers.

Part of the Governing Multifunctional Landscapes in Sub-Saharan Africa (GML) project financed by the European Union, ICRAF’s intervention for capacity development, focuses on “training the trainers” for going to scale. This means that local representatives received a course, which they will in turn deliver to other people in their communities.

Featured photo of food being cooked over charcoal made from invasive plants in Kibera, Nairo (one of the largest informal settlements in Africa) is courtesy of CIFOR/Axel Fassio.

This article by Mary Njenga (@marynjeng) originally appeared on the CIFOR website. Reprinted here (with minor edits) by permission.