Hundreds of millions in federal funding flowed to bus rapid transit (BRT) systems last month…and there is more to come.

Expanding and improving rapid transit systems in America is a high priority for members of Congress and also local government officials.

The goal is to make public transportation more convenient and attractive, and the hope is that increased ridership will help relieve traffic congestion and result in cleaner air.

Although some Americans resist public transportation, it is a critical part of the country’s transportation infrastructure, and many people depend on it completely.

Because of the funding, there will be upcoming contracting opportunities related to expansion, refurbishing, and redeveloping rapid bus systems for many years.

A BRT trip will soon be faster, easier to access, less crowded, safer, and more comfortable. Opportunities similar to the ones described here are the type that can be found throughout the country.

Denver’s rapid transit service has benefitted from a $55 million capital investment from the city and will soon enter a final design stage for the initiative. The project will include construction, technology, security, acquisition of buses, and more.

The local transit authority in Pittsburgh, Pennsylvania is working on a $291 million proposal to expand BRT services between two of the state’s busiest commercial zones. Officials will integrate downtown and uptown regions of the city into a single bus system that will also connect to outlying communities.

The project will include exclusive lanes, traffic light technology, more than 20 new bus stations, and the purchase of electric buses. A timeline for the project indicates that contracts will be awarded so that work can begin in early 2023. 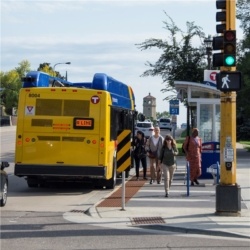 Photo courtesy of the Twin Cities’ Metropolitan Council in Minnesota.

Just months ago, Metro Transit, servicing the Minneapolis-Saint Paul metro region, released an updated version of a plan to bring eight new arterial BRT lines into service. Construction costs will be spread over a number of years, but total cost estimates are somewhere between $50 million to $100 million.

The Arterial Bus Rapid Transit system in Minnesota will soon begin to launch expansions of its highest ridership routes. The first $65 million project is waiting only for the design work to be completed.

This particular expansion will provide service to the University of Minnesota campus and work should be underway by 2023. Another transit project is forecasted for a 2024 construction start date and others are scheduled immediately after that. Overall costs will be extremely high as another upcoming project carries an estimated cost of $78 million.

The agency that oversees transit services in the city of Monterey, California, was recently awarded a $25 million state grant to build out a busway exclusively for a new BRT system. The funding will cover half of the estimated $50 million budget for the Monterey-Salinas Transit’s proposed bus-only roadway.

City and county transit officials are collaborating to develop the new SURF! Busway and BRT system. The new corridor project, which will run parallel to California’s Highway 1, is currently scheduled to release solicitations so that work can begin early in 2024.

Another $77 million investment in mobility enhancements will allow California’s East Bay Transit system to modernize multiple BRT stations. The project will be designed to address recent increases in ridership and reduce traffic congestion. Work is scheduled to be underway by 2024.

Officials in Lincoln, Nebraska will develop a new transportation hub with the goal of modernizing the city’s BRT system. A new multimodal transfer station will expand the city’s existing bus bay capacity to accommodate new electric buses and provide services to a growing ridership.

The project also will include electric vehicle (EV) charging infrastructure and a parking structure designed to support between 600 and 700 parking spaces. A federal grant of $32.2 million was made available for the project. Plans indicate that construction will be completed, and the new services will be available to riders by 2025.

The Pinellas Suncoast Transit Authority, which serves the St. Petersburg and Tampa Bay areas of Florida, will also construct a new, modernized transportation hub. A recent federal award of $20 million is available for the preliminary planning work which has a projected cost of $45 million.

Projects such as these are part of an inaugural wave of plans to improve BRT systems throughout the country. Similar plans will emerge regularly over the next five years.