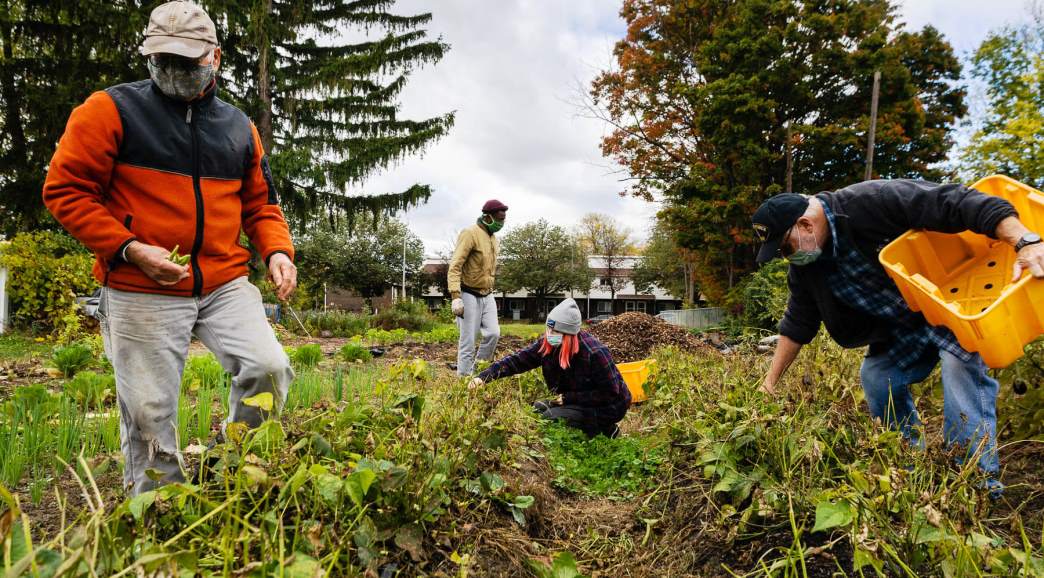 Pressed against the confluence of the Chemung and Susquehanna rivers in southern New York, the city of Binghamton has always known floods.

The city, like many across the country, is protected from rising waters by massive levees built during the New Deal, following a major storm in 1936. But many decades later, with climate change making major storms both more intense and frequent, planners are taking different approaches to make the city more resilient.

Part of the response—along with measures such as restoring streams to reduce flood conditions and stem erosion, installing green infrastructure to manage stormwater, and rebuilding bridges and buildings to better withstand flooding—has been a buyout program that has helped residents relocate away from the city’s floodplain. 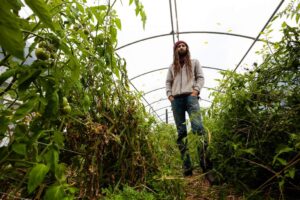 While many buyout properties can remain vacant for years, the city has leased several lots to the nonprofit Volunteers Improving Neighborhood Environments, Inc. (VINES). This allowed VINES to expand Binghamton Urban Farm, which it manages in order to provide healthy, affordable food to local residents. With the addition, Binghamton residents have gained valuable green space—something that many communities are losing faster than they are gaining.

Beth Lucas, a senior planner for the Broome County Department of Planning and Economic Development, said VINES’ innovative use “makes them productive properties, not just properties that sit there waiting to flood.”

The farm was founded in 2010 on two small residential lots near the Susquehanna River, totaling about half of an acre. The following year, the remnants of Tropical Storm Lee put the farmland—and neighboring houses, under several feet of water.

The buyout process through the Federal Emergency Management Agency (FEMA) took several years, and in November 2018 four houses were demolished, bringing the size of the farm to its current 2.25 acres.

“That following spring we started to move onto the land,” said Kyle Rittenburg, the farm’s manager. Some parts of the farm were growing crops for the first time in 2020.

The buyout stipulations from FEMA don’t allow for any permanent buildings, but the farm features two hoop houses, a trailer office, a perennial garden, fruit trees, berry brambles and rows of crops like radishes, lettuce and peppers.

“This year I think we’ve got about 50 to 60 different varieties of veggies,” Rittenburg said.

Underneath the shade of large solar panels late in the growing season, a handful of volunteers in masks prepped bags of greens for delivery as part of the farm’s community supported agriculture (CSA) program, which distributes over 200 shares weekly.

“Also, the farm share program accepts SNAP and EBT, so that’s much different than a lot of other CSAs,” Rittenburg said, referring to the USDA’s Supplemental Nutrition Assistance Program and Electronic Benefits Transfer.

Starting from the ground up 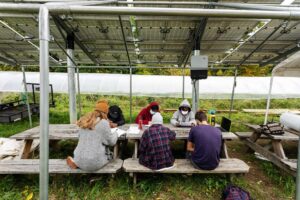 The farmland’s previous use as residential property created some early challenges when converting it to food production.

“The soil is pretty compact, and it also has some lead in it,” Rittenburg said. An environmental justice grant from the New York State Department of Environmental Conservation (DEC) paid for things like topsoil to cover any contamination left after demolition on the farm, as well as fencing and compost.

The farm uses straw bale beds as another means to improve the soil, to which Rittenburg said they are constantly adding organic material.

“And so, the soil is able to store more water,” Rittenburg said. There’s also the hope that deeper roots from many of the trees and plants growing on the farm will help water better infiltrate into the ground instead of creating stormwater runoff.

The farm has also hosted high school students participating in VINES’ youth program, who split their time between the farm and VINES’ community gardens, which are located throughout the greater Binghamton area.

The nonprofit’s original goal was to operate 20 community gardens by 2020, but the coronavirus pandemic slowed their progress—19 are open, and with support from an additional DEC environmental justice grant, it plans to create several more in 2021.

A future flood is practically inevitable and would likely be a similar setback to what happened in 2011, when the farm’s hoop house was inundated, and that season’s crops were relegated to compost. But Rittenburg said it’s much easier now for the farm to rebuild, and they would simply replant the next year.

“If it floods, okay, we’ll lose some vegetables,” Rittenburg said. “But nobody’s going to lose their house.”

This article by Will Parson was originally published on the Chesapeake Bay Program website. Reprinted here by permission.