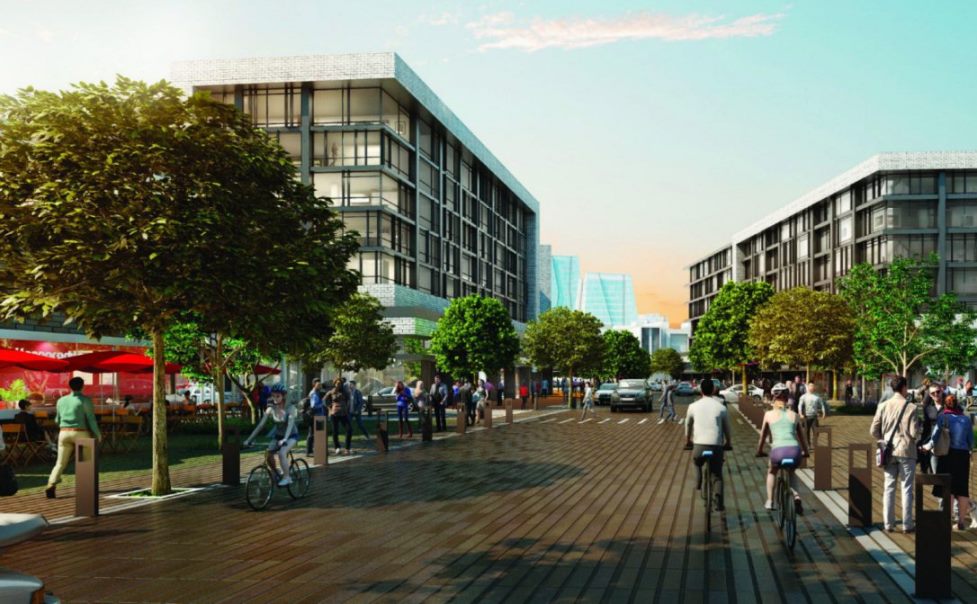 A 72-acre parcel of blighted waterfront industrial land on Lake Ontario, vacant for 30 years, will finally be revitalized and reconnected to Mississauga, Ontario’s pedestrian-friendly Port Credit neighborhood. Mississauga is known as one of the most pedestrian-unfriendly cities in Canada, so th Port Credit area is (hopefully) a model for remaking this badly-planned, car-centric city.

The $2 billion redevelopment plan still must be approved by Mississauga council. It comprises 2500 highrise and townhome units for about 5000 residents plus 200,000 sq. ft. of office and retail space. Projections promise about 1000 new jobs for the community. A new YMCA, four green corridors that reconnect the areea to the lake, and a waterfront park (including an ecological garden and a beach), are also planned.

Remediation and rezoning of the old oil refinery site will take about two years, and the whole development should be fully built-out in about eight years. 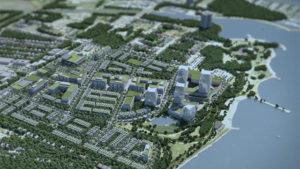 On May 1, 2017, WVP announced that it had concluded the purchase of the 72-acre former industrial site at 70 Mississauga Road South in Port Credit. WVP says that it is looking forward to working with the Port Credit residents and stakeholders on a plan to transform these lands into a complete, vibrant and diverse waterfront community where people can live, work and play. This development has been long anticipated and will be a harmonious and supportive complement to Port Credit.

WVP is a joint venture of four leading Canadian developers and city builders: Kilmer Group, Dream Unlimited Corp, Diamond Corp, and FRAM + Slokker.WVP has developed a mixed-use master plan that builds upon the principles of the City of Mississauga’s Inspiration Port Credit vision and recognizes the importance of thoughtfully integrating with the vibrant neighbourhoods of Port Credit.

“We’re determined to deliver a special community that will raise the bar for architectural and design excellence and to transform this section of the Port Credit shoreline into a dynamic waterfront community with places to live, work, shop and play,” said WVP Spokesperson Ken Tanenbaum, Vice Chairman of Kilmer Group.

“Today is another important milestone for the historic and charming waterfront community of Port Credit. The unveiling of the draft plan for this new development is proof that Mississauga is a city in demand and that people continue to choose Mississauga to raise a family, find a well-paying job and enjoy an unrivalled quality of life. Let me acknowledge all staff, Council, business leaders and community partners who have worked together to make this plan a reality,” said Mayor Crombie.

WVP’s master plan is dedicated to revitalizing the 72-acre site in a manner that will fulfill important city building objectives of architectural excellence, connectivity, high quality public realm, community gathering spaces, and a series of parks that collectively enhance the Mississauga waterfront experience—all informed by a thoughtful environmental strategy.

WVP says that it’s committed to transparent communications and engagement with the public, elected officials, City Staff and all stakeholders. Following in our tradition of working with the public in the development of our projects, later this spring the WVP will hold the first of what we anticipate will be a series of public meetings to engage with the community in delivering an extraordinary landmark development for the City of Mississauga.

The development draft master plan proposal aspires to transform the former industrial site into a complete, vibrant and diverse waterfront community where people can live, work and play—a harmonious and supportive complement to Port Credit. It hopes to revitalize the 72-acre site in a manner that will fulfill important city building objectives of architectural excellence, connectivity, high quality public realm, community gathering spaces, and a series of parks that collectively enhance the Mississauga waterfront experience—all informed by a thoughtful environmental strategy.

History of the project site at 70 Mississauga Road South:

For more than three decades the landmark property at 70 Mississauga Road South on the Lake Ontario shore in Mississauga has sat idle with residents wondering when and how it could be brought to life. In December 2016, West Village Partners (WVP) was selected by Imperial Oil as the winning bidder after a robust RFP process to purchase the 72-acre lakefront property and concluded the purchase in March 2017.

[Note from Storm:] Brownfields sites can take longer and cost more to develop than greenfields, but the cost is frequently justified by the location. Many brownfields are contaminated because they’ve been in use for decades, or even centuries. And they have been in use for a long time because of their prime location…often on a waterfront, as here in Mississauga. [end of note by Storm]

A statement by Imperial Oil in 2014 said, after a year-long environmental assessment: “The [assessment] concluded that there are no physical site conditions which would prohibit redevelopment for commercial, medium and/or high density residential, and open space uses, but at a higher cost than a similar greenfield property.”

Imperial Oil found no groundwater contamination that would pose a risk to surrounding lands or Lake Ontario. Environmental consultants sorted through the information for Kilmer Group and designed a remedial approach for the site. That approach, though, will still be getting input from city officials and residents in Mississauga. “It by no means is final right now,” said David Harper, president of Kilmer-Brownfield and a leader in the Canadian Brownfield Network (CBN). “What it identified [is] most of the impact on the site related to petroleum hydrocarbons was in the near-surface environment … the upper three metres of the site. Much of our development plan will take place in that upper three meters. There’s significant overlap between the materials that need to be moved for development and those that are impacted by the former use.”

In other words, remediation and redevelopment overlap, but remediation comes first. “There are areas of the site that were more impacted than others [by] former operations. That’s the focus of the remediation. Other [areas] will be dealt with through construction,” he continued