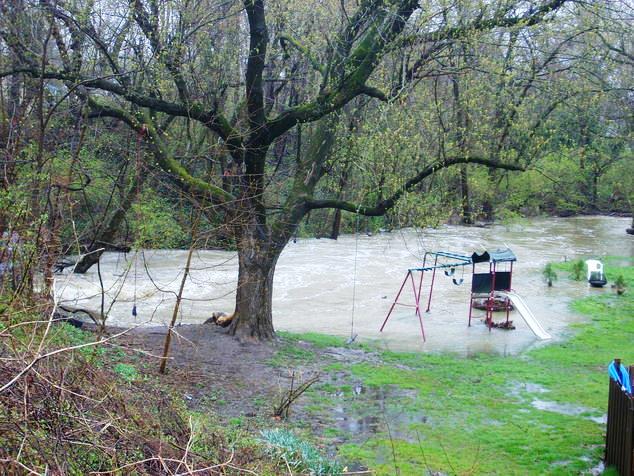 Modernizing the state’s stormwater rules must be a central focus of these efforts in order to protect New Jersey communities from increased flooding and pollution.

What’s in the executive order?

Governor Murphy’s order directs the New Jersey Department of Environmental Protection (NJDEP) to make sweeping regulatory reforms, branded as “Protecting Against Climate Threats (PACT)” regulations, to reduce emissions and adapt to climate change. With this executive action, New Jersey is among the first states in the nation to pursue a comprehensive and aggressive suite of climate change regulations.

The executive order acknowledges that climate change will have, and is already having, significant impacts on New Jersey. Those impacts include an increase in the frequency and intensity of rainfall and other severe weather events.

Critically, the order notes that “minority and low-income communities are disproportionately affected by climate change, including . . . by the displacement of coastal and low-lying neighborhoods from sea level rise and flooding.”

In order to protect communities from these threats, the order directs NJDEP to adopt “Protecting Against Climate Threats (PACT)” regulations within two years. As part of these rule changes, NJDEP is directed to “integrate climate change considerations, such as sea level rise, into its regulatory and permitting programs, including but not limited to, land use permitting, water supply, stormwater and wastewater permitting and planning, air quality, and solid waste and site remediation permitting.”

Following this directive, NJDEP Commissioner McCabe issued an implementing order yesterday providing more details on the reforms. That order lists the state’s stormwater management rules among the regulations that NJDEP must update to address climate change.

What does stormwater have to do with climate change? 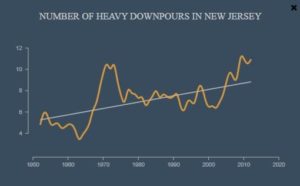 Polluted stormwater runoff from cities and suburbs is New Jersey’s greatest water quality challenge. Whenever it rains, water flows off parking lots, roadways, rooftops, and other hard surfaces, picking up pollutants and litter. This contaminated runoff drains directly into streams, rivers, and tidal waters without any treatment.

About one-third to one-half of all water bodies in the state are violating water quality standards because of runoff pollution, including beloved waters like Barnegat Bay. The U.S. Environmental Protection Agency has found that stormwater is responsible for degrading more waterways in New Jersey than any other pollution source.

Stormwater also contributes to costly urban flooding that damages homes, businesses, and roads. Paving over natural areas with hard surfaces that don’t absorb rain dramatically increases the amount of water running off the land during storms. As a result, development worsens communities’ vulnerability to floods.

In New Jersey, development projects over a certain size have to take steps to control the stormwater runoff they generate. However, the current rules are woefully outdated. They aren’t adequate to protect waterways now, much less under the future conditions we’re expecting.

NJDEP also recently adopted a rule requiring development sites to use green infrastructure practices to meet the state’s stormwater management standards. But those changes do not strengthen or modify the numeric performance standards that make up the core requirements of the rules. That means that even though development sites will use more beneficial practices once the green infrastructure rule goes into effect, they still won’t be required to address the total volume of runoff leaving the site.

What should New Jersey do to build stormwater resilience? 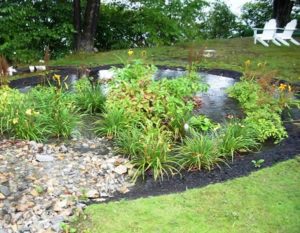 In response to the governor’s executive order, NJDEP should comprehensively update the state’s stormwater rules. Adding a discrete “climate change” section to the regulations would be too narrow a change to address the underlying inadequacies in the rules.

First and foremost, NJDEP should adopt a standard requiring sites to retain runoff on-site, preventing it from becoming harmful runoff in the first place. Many jurisdictions around the country have adopted similar requirements, demonstrating that on-site capture is a feasible and effective way to control stormwater.

A stakeholder process aimed at updating the state’s stormwater rules is already underway. NRDC and our partners have been advocating for the adoption of a retention standard through that process, as we have been urging the Department to do for years (including through a 2014 petition).

There is no reason why NJDEP cannot proceed at once with these essential changes. We will continue working to ensure that the Department moves forward quickly, and comprehensively, in order to meet the deadline in the governor’s order.