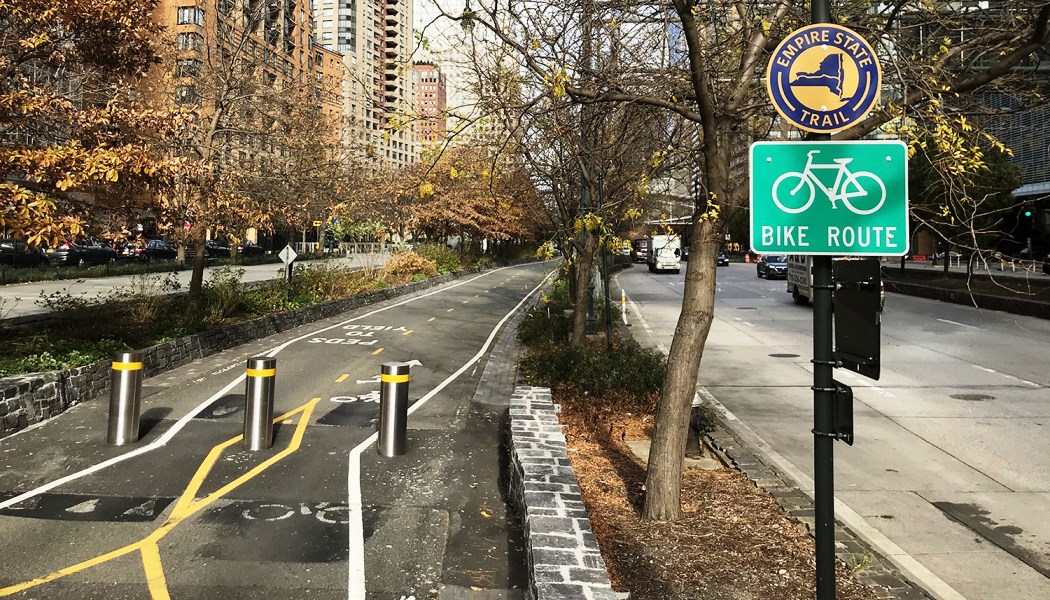 At a hearing held by the New York City Committee on Transportation and Infrastructure on June 28, 2022, a key bill on greenways was discussed.

Intro 291, a bill sponsored by Carlina Rivera and Chair Brooks-Powers, would require the Department of Transportation (DOT) and the Department of Parks and Recreation (DPR) to create a master plan for New York City’s greenways and to regularly engage with communities regarding proposed changes, updates, or repair work to greenway sections.

To those unfamiliar, a greenway refers to a path, cordoned off from the street, lined with green infrastructure like trees and soil. Their primary function is to enable safe commuting around the city by pedestrians and cyclists, but they also bring a number of local safety benefits.

The green components of the greenway – i.e., plant life – can benefit their immediate surrounding area in many ways. One way they do this is by absorbing stormwater and runoff, preventing flooding as a result of heavy rainfalls.

While NYC already has greenways, the current network has spotty coverage and is not consistently maintained. Intro 291 would connect the separated greenway network, extend coverage into new areas, and properly maintain the network.

NYLCV strongly supports Intro 291. In addition to providing the multiple safety benefits mentioned above, an extensive greenway network connecting the city would be invaluable to fighting climate change.

Transportation is a leading source of emissions in NY and the USA – most of the emissions from the sector come from personal cars and heavy duty vehicles.

The continuous acceptance of and reliance on car culture will further damage the climate by maintaining the status quo of emissions and limiting the potential of other, cleaner transportation modes.

An extensive, interconnected greenway system in NYC would be a significant step in reimagining how people live and move in the city. It would provide safe, low-emission routes throughout the city, enabling people to avoid driving or hailing cars as often.

Finally, the expansion of the greenway network would address inequity concerns regarding the existing network – its current inconsistent coverage means that some communities’ commute is limited.

Considering equity is a central emphasis of the DOT under Chair Brooks-Powers, Intro 291 is perfectly in line with the department’s priorities. Greenway access would be made universal throughout the city, assuming the greenway master plan is executed, and all communities would be able to reap their benefits.

Notably, the NYC DOT has applied for a Rebuilding American Infrastructure with Sustainability and Equity (RAISE) discretionary grant to fund an expansion of NYC’s greenways, among other objectives.

We hope that the grant is approved; the funding it would provide would synergize well with Intro 291 and ensure that the city’s greenway network is effectively expanded.

Photo of the Manhattan Greenway Trail courtesy of the State of New York.

This article by Elijah Vander Molen originally appeared on the website of the New York League of Conservation Voters (NYLCV). Reprinted here (with minor edits) by permission.