In Boston, Massachusetts, there’s an old industrial canal called Fort Point Channel. Plans have just been announced to revitalize it in a way that not only stimulates economic growth, but also boosts neighborhood resilience to rising sea levels. 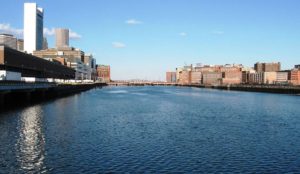 Fort Point Channel is a maritime channel separating South Boston from downtown Boston, and feeds into Boston Harbor. It was named after a local Colonial-era fort. The south part has been gradually filled in for use by the South Bay Rail Yard and several highways (specifically the Central Artery and the Southeast Expressway).

At its south end, the channel once widened into South Bay, from which the Roxbury Canal continued southwest (where the Massachusetts Avenue Connector is now). The Boston Tea Party occurred at the canal’s northern end and is celebrated daily at the Boston Tea Party Ships & Museum.

Wooden boats built by 5th graders at Community Boat Building paddle the Channel, along with two Dragon Boat teams, avoiding the pieces of public art afloat in the Channel year round. The channel is bordered by the Fort Point neighborhood, one of New England’s oldest arts communities and home to the Boston Children’s Museum since 1979.

Every day the bridges of Fort Point Channel are packed with visitors and the workforce trying out the hippest restaurants and going to work at tech companies large and small, with the biggest being GE and LogMeIn.

Large open spaces on each side of the channel would serve local populations of residents and workers, and draw visitors from across the city, with the hope that Fort Point Channel will serve as a vital link in the open space network, tying together the Harbor Walk, Martin Richard Park, the 100 Acres Plan and the Greenway.

On September 20, 2017, an influential non-profit called The Trustees of Reservations applauded Boston Mayor Martin J. Walsh and the City administration’s effort to highlight the needs and demands of a resilient waterfront in Boston.

The statewide conservation nonprofit has been exploring options for reimagining open space along the Boston waterfront, focusing on sites that are at risk from rising sea levels and could provide more accessible recreational space for residents and visitors. Fort Point Channel, one of the sites The Trustees has been evaluating, is a critical waterway that stretches between downtown and the South Boston waterfront, into the heart of some of Boston’s residential neighborhoods that are most vulnerable to flooding associated with climate change.

“After two years of careful research and planning, the Trustees stand ready as a strategic partner with the City of Boston, to implement the Mayor’s vision of equitable open space and climate resiliency along Fort Point Channel for all Bostonians,” says Barbara Erickson, Trustees of Reservations President & CEO. “Our 126 years of land management experience along with our ability to generate community support makes the Trustees uniquely able to help see this vision become a reality.”

The Trustees has been working in collaboration with several nonprofit and partner organizations to determine a shared vision for the improvement and protection of Boston’s vulnerable waterfront which has been under increasing stress from rapid development and the threat of rising sea levels. Thanks to support from $1.7 million in planning grants received to date from the Barr Foundation and several generous donors, The Trustees have been moving forward with research and planning to determine the potential for world class parks in East Boston, South Boston and along the Downtown Waterfront that would protect vulnerable areas of the city. 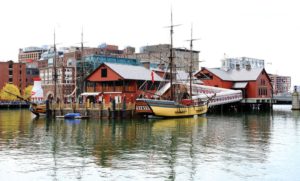 In addition to several other viable locations along the harbor, The Trustees has explored the possibility of reimagining the Fort Point Channel, both in open space design and recreational programming. This research and exploration has included visioning plans that would include an expanded open space network around the channel that will connect the its edges and the water, with the potential to mitigate significant flood risk.

The vision would also include transforming the inactive waterway into a new public space for the city through islands, marshes, and pedestrian bridges that would create paddling opportunities on the water and running paths around the edges. Large open spaces on each side of the channel would serve local populations of residents and workers, and draw visitors from across the city, with the hope that Fort Point Channel will serve as a vital link in the open space network, tying together the Harbor Walk, Martin Richard Park, the 100 Acres plan and the Greenway.

“We are grateful to Mayor Walsh for his support of our work as we move forward with next steps in this exciting process,” adds Erickson. “This initiative will realistically take several more years to complete and require significant support from the community and public and private partners, but we are confident that with his leadership and continued support, we will begin to see progress soon.”

Originally founded in Boston by open space visionary Charles Eliot, a pioneer in land conservation and the public parks movement, The Trustees has long been focused on the preservation and promotion of public parks for people. As the nations’ first and Massachusetts’ largest conservation and preservation nonprofit, The Trustees actively cares for more than 115 publicly accessible scenic, cultural, agricultural, and recreational properties across the Commonwealth, including over 120 miles of the Bay State’s coastline – the largest acreage of shoreline in the state after the federal government.

With sites located in 75 communities throughout Massachusetts, including 55 community gardens in the City of Boston, the organization works to maintain, oversee, and acquire critical lands for public benefit while working to carefully balance public access with significant ecological and wildlife habitat protection in the city’s ever-changing environment.

The Boston Waterfront Initiative is designed to carry on The Trustees’ legacy of land protection and innovation to create world-class open space solutions along the Boston waterfront that can both help anticipate and protect our historic city from the effects of climate change while benefiting quality of life for all Bostonians.