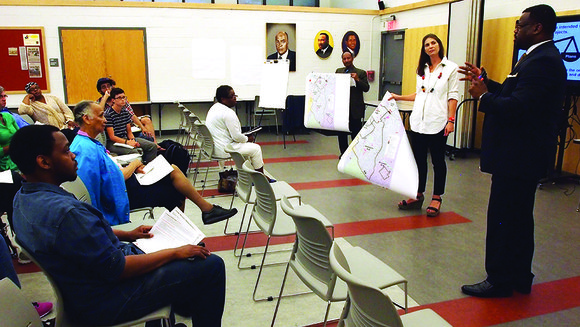 For many Bostonians, the phrase “urban renewal” conjures up images of long-destroyed neighborhoods: the West End, the New York Streets section of the South End, Castle Square, Madison Park.

So the Boston Redevelopment Authority has its work cut out for it, embarking on a citywide campaign to gain support for the re-designation of its urban renewal districts — a process that requires approval from the Boston City Council.

Top of the list for the agency is to persuade Boston residents to get past the negative history associated with urban renewal.

“I wish we could call it something else,” said BRA Senior Urban Designer/Architect Corey Zehngebot, speaking during a meeting with Roxbury residents. “You hear it, and immediately you have a visceral reaction.”

In some ways, Zehngebot may have engaged one of the agency’s toughest audiences in bringing the urban renewal conversation to Roxbury, where in decades past the program was referred to as “Negro removal.”

But the fact that the conversation around urban renewal is even happening underscores a shift in the BRA and how it does business. Ten years ago, when the agency sought its decennial renewal of urban renewal designations, BRA officials did so largely out of the public eye, pressing city councilors for support in secret meetings that violated state open meeting laws.

“This year, we’re approaching different neighborhoods to have a genuine process,” Zehngebot said.

Under Walsh’s plan, the luxury developments going up in downtown Boston, the South End and the Fenway would be complemented by the construction of moderate- and low-income housing in the neighborhoods, drawing from the city’s supply of over 300 buildable lots.

At-large City Councilor Ayanna Pressley said the report on the BRA is an important first step for agency reform.

“At the core, we’re trying to create spaces for people,” Zehngebot responded. “We have to ask, ‘How does this make a neighborhood better for people.’ ”