The Stop & Shop supermarket chain has a store in the former industrial area now being revitalized into the transit-oriented, mixed-use Boston Landing redevelopment.

But they aren’t content to passively watch their market thrive on all the new customers coming into the area. They want to actively add more such customers, and use their real estate in a more profitable manner. In other words, they will be revitalizing themselves while contributing to the revitalization of the neighborhood.

Stop & Shop has proposed building over 1,000 apartments in a mainly commercial area off the Massachusetts Turnpike on the Allston-Brighton rail line. 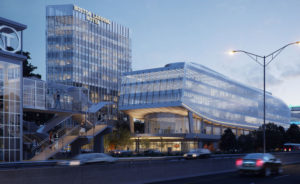 It would thus be among the biggest housing developments in the city. The 11-acre property is adjacent to the new Boston Landing development being built by New Balance, which will also include several hundred apartments and a new commuter rail station.

The proposal is in keeping with Mayor Martin J. Walsh’s push to get more housing in the outer neighborhoods of Boston and would also help the mayor reach his stated goal of building 53,000 new units by 2030. 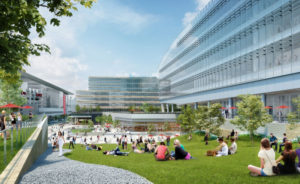 And Allston-Brighton has emerged as perhaps the hottest of those outlying neighborhoods, as builders look for locations that are cheaper than downtown but still relatively close to job centers in the city.

Adding to the momentum of the area, Harvard University is repurposing the nearby former CSX Beacon Park rail yard into a 500,000-square-foot science and engineering complex in Allston.

Top photo is of Boston Landing site behind the Stop & Shop in November of 2015, via Wikimedia.