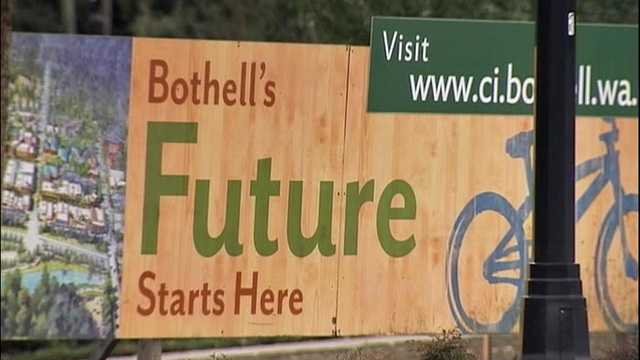 On April 14, 2016, the city of Bothell, Washington broke ground on the last phase of its $25 million revitalization project downtown.

In 2006, the City of Bothell began a community planning process for a Downtown Revitalization Plan, which has now begun. The plan will capitalize on the historic charm of the City’s Main Street, bring new retail, offices and create five new residential neighborhoods in the downtown district.

In addition, the City of Bothell has commenced with two major transportation projects that will knit the downtown back together and allow for the historic charm of Bothell to influence the design and development of the revitalization plan. These two projects are the Crossroads Realignment and the Wayne Curve (completed in June 2012) roadway projects.

The Crossroads Project realigns Highway SR 522 to create a new grid of downtown blocks and eliminates physical barriers and heavy traffic congestion during peak hour traffic along a major commute corridor around Lake Washington. The project is one of the highest ranked economic development projects proposed by the State Community Economic Redevelopment Board; and one of a few to be funded by state tax increment financing through a program called LIFT (Local Infrastructure Financing Tool). The Crossroads project is scheduled to be completed in the spring of 2014.

Both the Crossroads and Wayne Curve projects are included in the City’s $150 million public infrastructure improvements that will prepare the downtown for development.

The result of these public investments will be a fully integrated and pedestrian friendly downtown that reflects the City’s heritage, while leveraging 25 acres of city-owned aggregated properties (acquired over the last two years) into a destination and gathering place for area residents, employees and visitors.