Brainerd is a city of about 14,000 people in Crow Wing County, Minnesota. It’s the county seat, and is one of the largest cities in Central Minnesota.

Brainerd straddles the Mississippi River several miles upstream from its confluence with the Crow Wing River, having originally been founded as a site for a railroad crossing at that confluence. 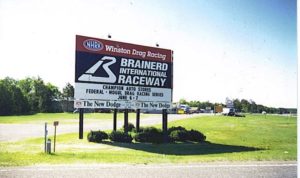 An anonymous 1997 photo of the entrance to the Brainerd International Raceway.

Due to the natural beauty of the area, the Brainerd economy is heavily dependent on tourism. Visitors are also attracted to the Brainerd International Raceway, which hosts races throughout the year, and has a national drag racing meet annually in August.

Now, a new strategy to revitalize Brainerd is focusing on 1) redeveloping the downtown; 2) repurposing surrounding sites as mixed-use; 3) reconnecting the area with new trails, and 4) renovating their existing buildings. In other words, it’s a good example of the 3Re Strategy in action: repurposing, renewing, and reconnecting.

Photo of nearby lakes courtesy of Brainerd Lakes Chamber of Commerce.

The next step for the River to Rail initiative is to create a team to further develop the vision, Buxton says. He compared this team to the task force formed after the paper mill in northeast Brainerd closed, to determine what to do with the vacant site.

The vision should fit into the city’s comprehensive plan, which is just starting its planning process.

Buxton asked the council to provide proactive support for the initiative and to be a cooperative partner when renovations are proposed for existing buildings.

See article by Spenser Bickett in the Brainerd Dispatch.