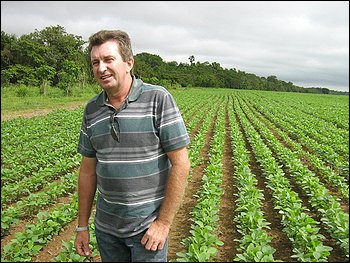 This 2009 article documents an emerging movement to reforest Brazil. REVITALIZATION readers familiar with the situation are invited to inform fellow readers (in the Comments section below) as to whether this effort gained any steam.

For nearly 20 years, Luiz Alberto Bortolini cleared trees and planted soybeans as fast as he could, one of many pioneers who turned this barren outpost into prosperous farmland.

Now, he and hundreds of other successful farmers are replanting trees as part of an ambitious initiative to reduce deforestation. Their goal — to set aside one-third of their farms for native vegetation — is revolutionary in a region long resistant to environmental controls.

“It had to happen, as soon as possible,” said Bortolini, 50, who now has a 6,200-acre farm. “This is in the farmers’ interests because the farmer is the one most dependent on the environment.”

The initiative, driven by the market and by new pressure from regulators, comes as the government considers proposals to dramatically reduce the rainforest destruction that has made Brazil a leading producer of greenhouse gases. Earlier this month, Brazil said it would cut emissions by up to 38.9 percent from projected 2020 levels, a pledge designed to encourage other countries to take major steps at next month’s global warming summit in Copenhagen.