Long-time readers of REVITALIZATION know that I (Storm Cunningham) am a big fan of the power microbreweries have to revitalize communities. We’ve had many articles featuring examples of this dynamic at work.

Part of that power derives from microbreweries’ unique ability to draw customers from a much greater distance than, for instance, an ordinary restaurant or store. This revitalizing effect is greatly maginified when the brewery 1) locates in a downtown, and 2) reuses and renovates a vacant—preferably historic—building. 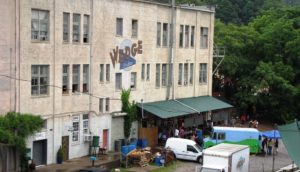 Food trucks serving customers at The Wedge.Photo by Storm Cunningham.

A good example of this is in the revitalized River Arts District of beautiful Asheville, North Carolina.

There, my favorite Asheville microbrewery, The Wedge, has been serving wonderful brews for a decade in an old factory building near the banks of the French Broad River.

But this story isn’t about The Wedge, which was founded by Tim Schaller in 2008. It’s about a brewery on the other side of the river, directly across from The Wedge. 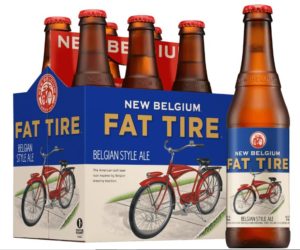 Any fan of craft beer has likely been drinking New Belgium brews for a long time. They were one of the first microbreweries to obtain national distribution and to leave the prefix “micro” far behind.

New Belgium started in a Fort Collins, Colorado basement 27 years ago, and is now a two-brewery craft icon, with about 800 employees nationwide.

I love Belgian-style beers in general, and their sour styles in particular. New Belgium Brewing Company is one of the largest producers of wood-aged sour beer in the United States, with its sour beer flagship being La Folie Sour Brown Ale.

New Belgium is a 100% employee-owned. It was opened in 1991 by Jeff Lebesch and Kim Jordan. In 2016, they produced 957,968 barrels of its various labels. As of 2016, it was the fourth-largest craft brewery and eighth-largest overall brewery in the United States. The main brewery is still in Fort Collins.

They’ve grown to the extent of needing an East Coast brewery, which is what happened across from The Wedge on a brownfield site that has served many other purposes, including circuses.

For about three decades, starting in the 1930s, the property was home to the Logan Show Grounds, a venue for public shows such as the Hagenbeck-Wallace Circus, the Downie Circus, and the Barnett Brothers Circus. The showgrounds also hosted E.W. Pearson’s WNC and District Colored Argicultural Fair and Farmer’s Jubilee.

Many craft brewers claim to be “sustainable,” and New Belgium helped pioneer this trend: In 1998 New Belgium Brewing made it a goal to offset 100% of its electricity through the city’s wind-power program.

Some brewers go beyond sustainable, to restorative, such as Flying Dog Brewery in Frederick, Maryland, and Devils Backbone Brewing Company in Roseland, Virginia, both of which contribute to the restoration of Chesapeake Bay. 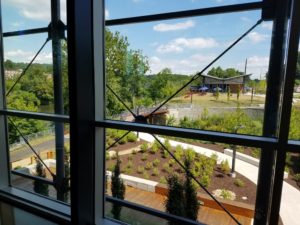 New Belgium has a similar program, whereby they offer grants to help restore the watershed that produces the water that goes into their Colorado brewery. But their Asheville location not only went far beyond being sustainable: they went beyond “merely” donating money to restroation to actually doing ecological restoration and brownfields remediation themselves.

The historic Asheville site was an industrial and agricultural hub for more than a century, having been developed for a variety of different uses throughout the years. In the 1800s, it was part of the Buncombe Turnpike, a footpath for agricultural trading between Asheville and Charleston, South Carolina.

In the early 1950s, it became the home of the Western North Carolina Livestock Market, and the property became an informal community center. Throughout the 1900s, many families operated businesses alongside the Market, including an auction house, a transmission shop and a salvage yard. 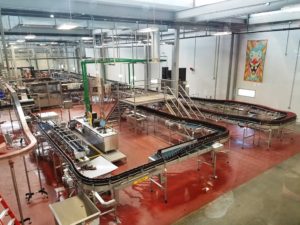 According to John Bell, one of the owners of Main Auto Parts salvage yard, local children went to college and families were raised on the revenues from this regional economic hub.

The site was used as a construction and demolition materials landfill until the 1980s (that landfill is now New Belgium’s Liquid Center and tasting room). When the site assessment was completed, New Belgium found onsite contaminants that included a small amount of lead-based paint, some petroleum, methane (from organic decomposition), asbestos-containing materials and copious amounts of construction debris.

After over a century of industrial use, the cleanup and redevelopment process for this site was bound to be long and complex. Fortunately for Asheville, New Belgium was committed to recycling the land and creating positive impacts that stretch far beyond the property line. 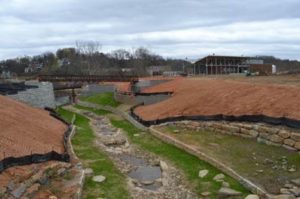 Before redevelopment, the site was bisected by a neglected creek, essentially a ditch full of old tires and concrete rubble. The water disappeared underground in places and the stream banks were collapsing on both sides. In partnership with the City of Asheville, a local nonprofit RiverLink, and with a grant from the North Carolina Clean Water Management Trust Fund, New Belgium ecologically restored the stream.

With input from the community, they named it Penland Creek in honor of the Penland family, which operated an auction house on the property for many years. The stream is now not only an attractive part of a functioning riparian habitat, but also a focal point of the brewery. 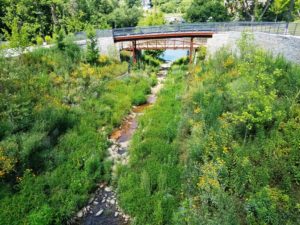 Throughout the property you can find native pollinator-friendly plant species designed to provide forage and habitat for pollinators throughout the growing season.

During redevelopment, what wasn’t salvaged was recycled, and New Belgium diverted 97% of waste from local landfills.

In building the new brewing facilities, New Belgium incorporated 14 linear miles of wood and metal from the former Western North Carolina Livestock Market and other buildings on the property. 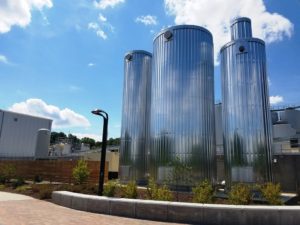 The tables and chairs in their tasting room are made with wood and metal salvaged from the property, crafted by an artisan directly across the river from the brewery.

90% of the brewery artwork was done by artists within a 3-mile radius of the brewery, and includes tile mosaics around the brewing vessels, bar tops, and tap towers. New Belgium achieved LEED certification on all of the buildings, including the brewery, tasting room and distribution center.

Along with steam restoration and incorporation of salvaged materials, New Belgium partnered with the Asheville Design Center to build a new bus shelter on Haywood Road. Grant funds and materials from deconstruction of the former buildings were donated by New Belgium as well. 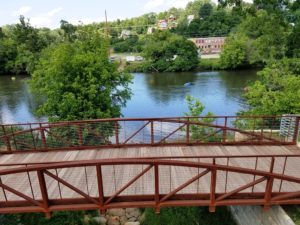 The partnership with the City also included establishing a greenway along the river adjacent to the property: New Belgium agreed to give the City the land and the City built the greenway.

At approximately a half mile in length, the greenway now connects with 5 miles of existing greenway (Buncombe County’s longest section). The City also invested in creating a trailhead at the north end (across the street from the New Belgium property) where an old maintenance yard used to be.

The trailhead features wayfinding and historical signage about the site as well as a bike repair station, and vehicle and bike parking. Salvaged materials from the former Livestock Market were used to build some of the structures at the trailhead. 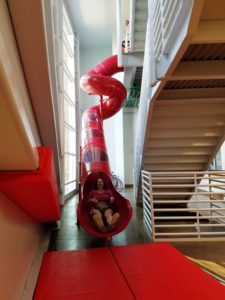 New Belgium’s Asheville brewery is just ten miles away from the expansion facility of Sierra Nevada Brewing Company. This isn’t a coincidence: Asheville has long been known for having the highest number of breweries per capita on any municipality in the U.S.

With such a culture of brewing, and such a concentration of workers experienced in the brewing art, it’s a natural location for any western brewery wishing an East Coast presence.

Trip Advisor calls the brewery tours at New Belgium’s Asheville facility “the best in the business.” I agree: I’ve been on many, and the one in Asheville is in a class by itself.