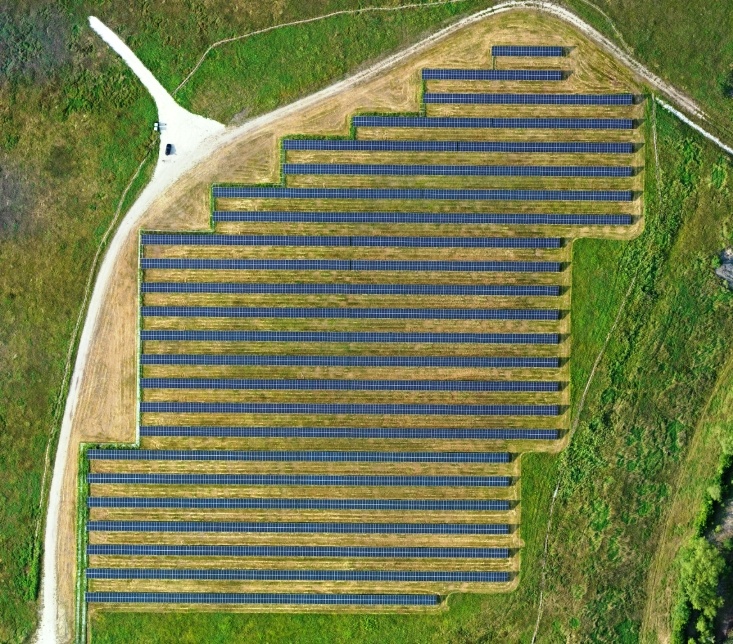 The 2002 book, The Restoration Economy, introduced the world to the concept of “brightfields”: turning contaminated properties into renewable energy facilities. It has since gone on the become a major new regenerative industry.

This is often the best repurposing strategy for community revitalization, especially in situations where the community cannot afford to remediate the property to other reuse standards, such as commercial or residential.

“We’re thrilled to partner with Inovateus Solar and Ameresco on a clean energy endeavor that gives new life to land that had been idle, while also delivering for the community,” said Jeff Denovan, Senior Vice President of Construction at Greenbacker Renewable Energy Company.

“In addition to the positive environmental impact of the solar power this project produces, it will also provide tax revenue to the Danville area,” he continued.

It was built on a brownfield site that formerly housed the General Motors Powertrain Division Plant.

Greenbacker Renewable Energy Company, an independent power producer and green energy investment company, is the owner of the installation.

The 2.62-megawatt (MW) Danville solar system consists of over 6,600 solar modules and is connected to the Ameren utility grid.

The completed project is expected to generate over 3,600,000 kWh of electricity and offset over 1500 metric tons of carbon dioxide annually.

These figures are equivalent to powering 350 Illinois homes and removing approximately 480 cars from the road.

“We can turn a serious problem into a tremendous opportunity by siting solar on closed landfills,” said Tyler Kanczuzewski, Inovateus Vice President of Sustainability.

“The Danville Solar project is making productive use of land that might otherwise lie dormant, while avoiding construction in more pristine areas. We’re proud to partner with Ameresco on this project and to help the state of Illinois achieve its clean energy goals,” he added.

This project contributes to Illinois’ Future Energy Jobs Act, which requires that 2700 MW of solar to be installed in Illinois by 2030 and that 2% of those projects come from brownfield sites, like closed landfills.

“We’re proud to have been a partner on this project designed to help meet sustainability goals and offer clean, resilient energy to the surrounding community,” said Louis P. Maltezos, Executive Vice President, Ameresco.

“This installation is a prime example of using innovative cleantech solutions to identify clean energy uses for public land,” he concluded.

The Danville solar project began construction in November of 2020 and reached completion in May of 2022.