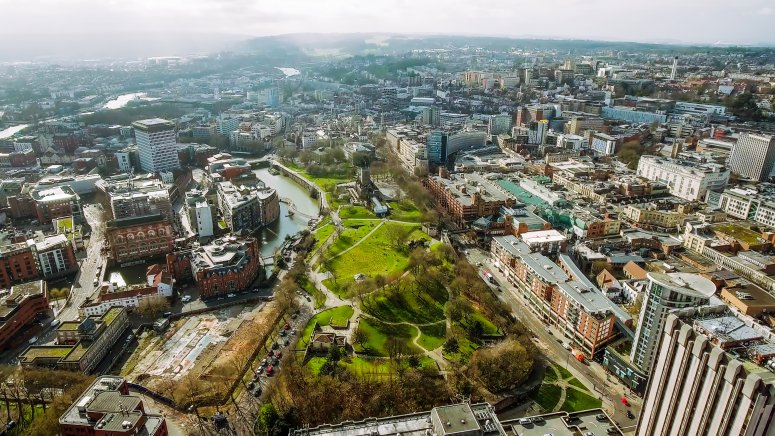 A city of almost half a million residents—Bristol, England—is moving quickly towards becoming a model of green urban regeneration.

Innovative local leaders expect to reap a host of benefits via a revitalization strategy based largely on restoring the city’s green infrastructure.

One of the goals of this project is to minimize the so-called urban heat island effect. Urban areas give off more excess heat than green spaces, and reducing this heat could lower the need for cooling systems and thus the city’s energy consumption. You can read more about urban heat islands here. Local authorities also seek to improve overall health and well-being through improving the city’s green infrastructure.

One initiative, known as the “one tree per child” program, aims to plant a total of 63,000 trees in public spaces. Stakeholders in the community, such as local school children or the Bristol Biodiversity Partnership, hold a key role in the greening project.

Large parts of civil society as well as private companies are also involved. Companies have recognized the many direct and indirect benefits of the programme. Bristol’s steady annual economic growth, which reached 4.7 per cent in 2012, underlines the important message that a more sustainable city does not run counter to financial prosperity.

Bristol currently boasts a high proportion of square meters of green space per inhabitant, which is all part of the city’s strategy to encourage active and healthy lifestyles. Local officials also wish to demonstrate the benefits of green spaces, especially where they are most needed. These attempts are supported by researchers at the Max Planck institute in Berlin, who have found that living near forests reduces stress levels.

Besides a 20-year investment program for the provision of green space, the strategy also includes a plan to introduce sustainable urban drainage systems. Such systems copy the drainage patterns found in nature, but before releasing the water back into the environment, they pass it through mechanical or chemical cleaning. This often includes techniques such as porous asphalt and paving or storm water detention vaults.