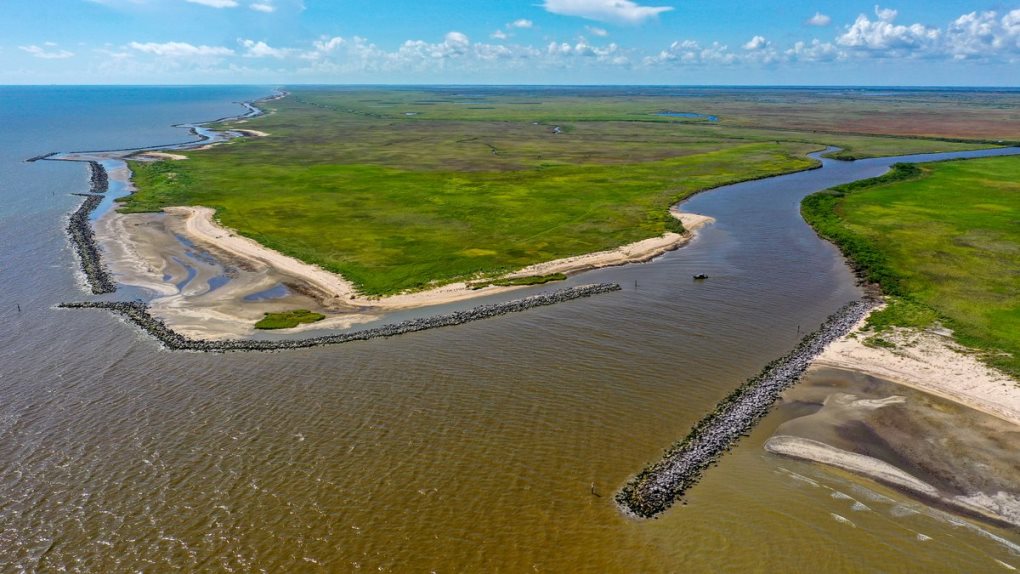 On January 12, 2021, the Louisiana Coastal Protection and Restoration Authority (CPRA) announced that operations are underway to restore Rabbit Island, the only Brown Pelican colony in Southwest Louisiana.

“Hatchlings were drowning and eggs were washing away and breaking because much of the island had eroded to sea level or below,” said CPRA Project Manager Todd Baker. “We are filling in and elevating portions of the island so the birds can survive the wind and water that overtopped nesting areas even during normal high tides.”

Located in the southwest portion of Calcasieu Lake in Cameron Parish, Rabbit Island is the first rebuild of a waterbird colony since the successful restoration of Queen Bess Island, which saw a dramatic increase in nesting activity immediately following its completion.

“And Rabbit Island is more than twice the size of Queen Bess, with 88 acres being rebuilt as suitable nesting habitat. We look forward to welcoming thousands of nesting birds back this spring,” he added.

The $16.4 million project is funded with settlement money from the Deepwater Horizon oil spill approved by the Louisiana Trustee Implementation Group (LATIG).

“After a devastating hurricane season in Southwest Louisiana, this restoration project is even more important to the overall recovery of the region,” said CPRA Chairman Chip Kline. “Rabbit Island is yet another example of our commitment to investing in and restoring Southwest Louisiana’s coastline.”

“This is a great project that shows Louisiana is leading by example when it comes restoring bird wildlife to their natural habitat,” said State Senator Mark Abraham.

A competitively bid contract for the restoration of Rabbit Island was awarded to Weeks Marine, a dredging company with offices in Covington, La. The project is creating approximately 130 jobs.

“Last year’s storm season was devastating for the people of Cameron Parish,” said State Representative Ryan Bourriaque. “As we continue to rebuild, I applaud the state for taking on this timely restoration project and for their continual investment in this region.”

Sediment is being dredged from the Calcasieu Ship Channel for the project. Vegetative plantings of appropriate native grasses and shrubs will further enhance the habitat for pelicans, terns and other colonial nesting waterbirds.

“This is wonderful to see,” said LDWF Secretary Jack Montoucet. “We’ve seen Rabbit Island seriously degrade, losing approximately 30% of its total acreage since 1955. But by combining the habitat expertise of Wildlife and Fisheries and the restoration abilities of CPRA, we are making a big difference that will allow our native species to flourish as we continue the mission of restoring and protecting coastal Louisiana.”

The entire operation is scheduled to be complete before nesting season begins in 2021.