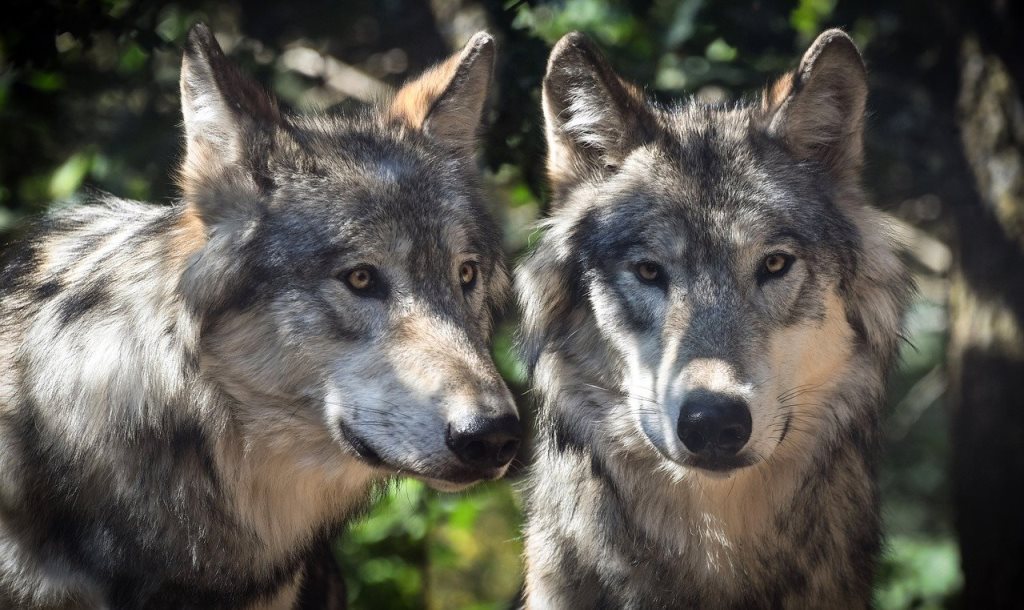 In the November 3, 2020 national elections, a Colorado ballot initiative (Proposition 114) to reintroduce gray wolves west of the continental divide was passed by voters.

As a result, Colorado Parks and Wildlife announced that it would begin planning for an eventual restoration of wolves in the state.

Earlier, on October 29, 2020, the U.S. Department of the Interior moronically announced a rule to remove the gray wolf (Canis lupus) from federal protections under the Endangered Species Act (ESA) nationwide. The rule was be published in the Federal Register on November 3, 2020, and will not be finalized until the 60-day window post publication has expired on January 4, 2021.

After the 60 days have passed, the rule goes into effect, transferring management authority of the gray wolf in Colorado to Colorado Parks and Wildlife. But the species remains listed as endangered under state law in Colorado, and killing gray wolves will remain prohibited, despite the Trump administration’s efforts to reverse decades of environmental progress.

Colorado is part of the gray wolf’s native range, but wolves were eradicated from the state by the 1940s. Over the past decade, the U.S. Fish and Wildlife Service (USFWS) restored gray wolves into Wyoming, Idaho, Montana, New Mexico and Arizona. Individual wolves, and most recently a group of wolves in Moffat County, have been periodically migrating into Colorado. It is possible that wolves from the south may do so someday as well.

To prepare for any future wolf migrations into Colorado, Colorado Parks and Wildlife (CPW) created a multi-disciplinary working group that drafted a Wolf Management Plan. The wolf working group’s recommendations were adopted in their entirety by the Colorado Wildlife Commission at its May 2005 meeting, and affirmed by the Colorado Parks and Wildlife Commission in 2016.

Proposition 114 – What Comes Next?

Proposition 114, a ballot initiative directing the Colorado Parks and Wildlife Commission to develop a plan to introduce gray wolves onto the Western Slope of Colorado, passed on November 3, 2020.

Proposition 114 directs the Colorado Parks and Wildlife Commission to:

The initial directive of Proposition 114 is for the Commission and Colorado Parks and Wildlife staff to create a plan, so it should be understood that this is not a plan that is already created and available to be released immediately. As hearings and public input opportunities are planned, CPW will communicate information about how to participate through our website, social media channels and eNews newsletters.

Wolves in Colorado: Who has Authority?

The gray wolf has been protected under the U.S. Endangered Species Act (ESA) in Colorado since 1974. The U.S. Fish and Wildlife Service (USFWS) published a rule to delist the species nationwide on November 3, 2020, which returns management control of the species to state and tribal wildlife agencies, including CPW, on January 4, 2021.

However, previous federal rules delisting gray wolves have routinely been litigated once finalized. If that pattern continues here — which is likely — federal listing status may be unclear in the immediate term. Regardless, the species remains listed as endangered under state law in Colorado, and take of gray wolves will remain prohibited.

A broad-based agreement on how CPW would manage the species via natural migration resulted from a wolf management working group CPW convened in 2004. In 2016, the Parks and Wildlife Commission considered the issue of wolf reintroduction and affirmed the recommendations from the working group, which supports the presence of wolves in Colorado, with conditions, and via natural migration into the state not through intentional reintroduction. With the passage of Proposition 114 and the announced delisting of the species, CPW would regain management authority of gray wolves in the state from USFWS. CPW will utilize the 2004 working group plan until the new plan required by the ballot initiative is developed.

Where would migrating or newly introduced wolves come from?

Wolves that migrate in and out of Colorado would likely come from the Northern Rockies populations currently in the states of Montana, Idaho and Wyoming.

The plan being developed as a result of Proposition 114 will determine where and from which packs any new wolves being introduced will come from; this will be determined with partnering state and federal agencies.

There are indications of wolves in the state. We typically field around 100 sightings each year. When confirmed sightings occur, the number of additional reports spike. However, wolf reports are typically not considered reliable without strong supporting evidence.

In the summer of 2019 a wolf from the Snake River Pack (a pack in Wyoming) was located in Jackson County, Colorado. Over the past decade we have confirmed or have had probable wolf dispersals that occurred in 2004, 2006, 2009, and 2015. We received a report in January 2020 of six large canids that were seen near the Wyoming and Utah borders. CPW staff went into the field to investigate the report, and were able to locate and visually confirm the presence of the pack.

Whenever there are reports of wolves in Colorado, CPW will work closely with federal partners to investigate their validity.

Photo of gray wolves by Christel SAGNIEZ from Pixabay.