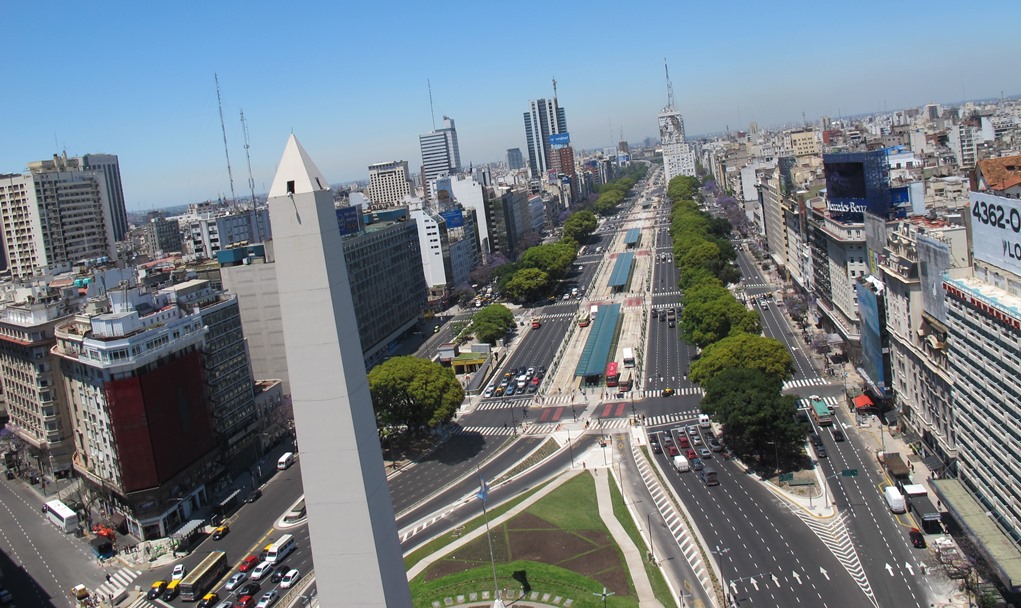 A successful inner-city renewal initiative in Buenos Aires, Argentina has been awarded the International Transport Forum’s Transport Achievement Award. The Award was presented to the Transport Authority of Buenos Aires on June 1, 2017 during the global summit of transport ministers in Leipzig, Germany. 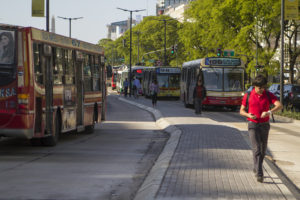 Juanjo Mendez, Secretary for Transport of the Government of Buenos Aires, said: “Metrobus 9 de Julio and Microcentro Peatonal were especially innovative as they were designed jointly, in a holistic project that took into consideration the surroundings, local reality and identity of the city’s downtown, improving mobility and road safety, and renovating public space. The positive outcomes where not only palpable in environmental terms, but also in a cultural transformation that led citizens to change their own approach on how they choose to commute around the city.”

Buenos Aires has over 3 million inhabitants and another 3 million commute into the city each day. As a result, traffic in the downtown area known as “Microcentro” frequently collapsed. Strangled by vehicle traffic, citizens came to see the Microcentro as a polluted, hostile environment. 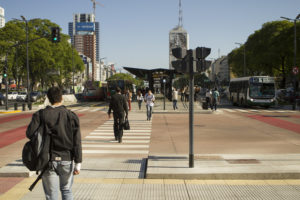 To change this, the Transport Authority of Buenos Aires in co-operation with the national government of Argentina and local stakeholders implemented Argentina’s first comprehensive urban revitalization program in which the inner-city space was reconfigured hand-in-hand with the available mobility options.

At the heart of the renewal initiative is a pedestrian priority area complemented by a new metrobus corridor. A total of 86 blocks in the Microcentro are now restricted for cars, and fitted with licence plate recognition technologies. Sidewalks were extended to create shared spaces, additional bicycle lanes and 29 new bicycle sharing stations were built.

Simultaneously, a new metrobus corridor was created on the Avenida 9 de Julio, the major north-south thoroughfare adjoining the Microcentro. The Bus Rapid Transit provides high-capacity public transport as an alternative to car travel into the city centre. 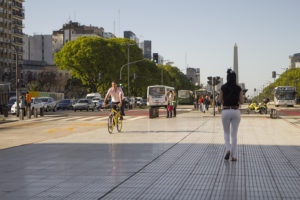 Guillermo Dietrich, Minister of Transport of Argentina, said: “Metrobus transformed Buenos Aires mobility. Our prioritization of the public transit is greatly appreciated by Argentines and Metrobus is one of the most dear and admired projects. We started it during my role as Head of Transport of Buenos Aires, and now, holding responsibility for Transport at a national level, we are expanding the system to major cities in the country. In the past 16 months we have implemented the Metrobus system in three other cities, one of them the most populated district in Argentina, where the bus is the main transport mode. We are committed to an inclusive and green public transit. Today Metrobus is improving the travel experience of millions.”

As a result, the number of cars entering the Microcentro has dropped by almost 86%, from more than 15 000 to just over 2 121 every day. The metrobus 9 de Julio, used by 11 bus lines carrying 255 000 people every day, cuts average travel time along the three-kilometre corridor by 50% in peak hours. CO2 emissions from traffic have been cut by 5 612 tonnes per year.

More than 1 million pedestrians now roam the Microcentro every day. A total of 197 new businesses have opened. 52 of these are restaurants, which are now able to provide outdoor places in an urban environment that now offers a friendly setting for different activities. Rising real estate prices also reflect the improved liveability of the area. 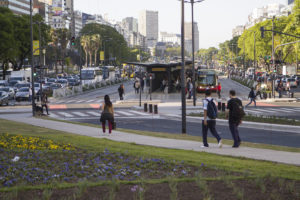 Metrobus 9 de Julio has become a symbol of mobility policies in Argentina. The National Government is now expanding this solution to big cities around the country. In the past 16 months, 3 new corridors have been implemented in Santa Fe, Rosario and La Matanza –the most populated district in Argentina. The Minister of Transport will launch another 7 corridors in the following cities Tres de Febrero, Neuquén, Morón, Mar del Plata, Córdoba, Corrientes y Mendoza, in order to benefit 3 million people.

The Jury of the Transport Achievement Award praised the Metrobus 9 de Julio project as “a good example of an effective cooperative framework that brings together different transport stakeholders, including national government, the municipality and transport operators”. The Jury also noted that the project has a high potential to be reproduced elsewhere.

All images courtesy of the Government of Buenas Aires.