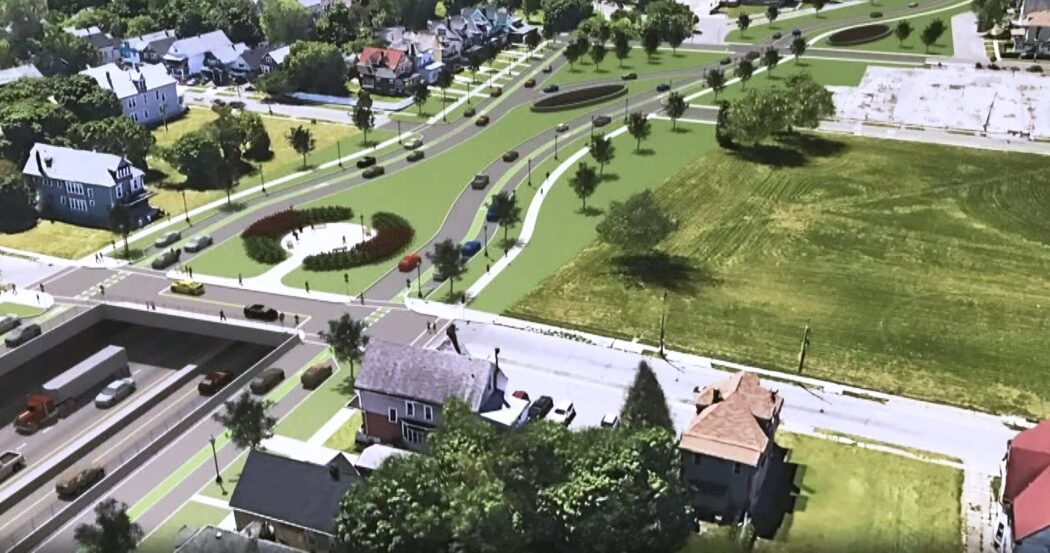 The 2020 book, RECONOMICS: The Path To Resilient Prosperity, stated that “80% of the revitalizing work done by civil engineers and urban planners in the 21st Century will undo 80% of the work done by their predecessors in the 20th Century.”

The latest example of that dynamic came in May of 2022, when the residents and leaders of Buffalo, New York celebrated the $1 billion commitment in the 2022-23 state budget for the redesign of Kensington Expressway, which will help fix one of the city’s worst urban planning mistakes. 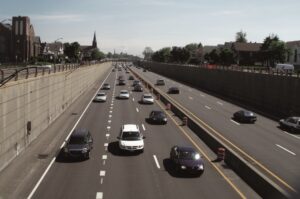 Constructed during the 1950s and 1960s, the Kensington Expressway replaced what had been a grand, tree-lined boulevard—the historic Humboldt Parkway designed by Frederick Law Olmsted—with a below-grade highway that severed the connection between the surrounding neighborhoods. The original boulevard connected Humboldt Park (now Martin Luther King, Jr. Park) with Delaware Park.

Buffalo Mayor Byron Brown said, “Securing funding to right the wrongs of one of the biggest planning mistakes in our history has been a community effort from the very beginning. It is critically important that the community remains engaged in this project. I encourage all residents of this neighborhood to come and learn about the construction process as well as offer ideas about how this investment can benefit the homes and businesses in the community surrounding the Kensington Expressway.”

Humboldt Parkway was designed by Olmsted in 1868 as part of the Buffalo Parks System. The expressway, designed by the notorious Robert Moses—who delighted in destroying the thriving neighborhoods of immigrants and African Americans—began construction in the 1950’s on what is now known as Route 33 along the path of Humboldt Parkway, citing a need to relieve increased traffic congestion and maintain housing values.

However, groups like the Restore Our Community Coalition (ROCC) point to the opposite effect decades later: decimated housing values in the surrounding community, thriving businesses and commercial corridors that became abandoned, and emerging respiratory illnesses attributed to vehicle emissions. 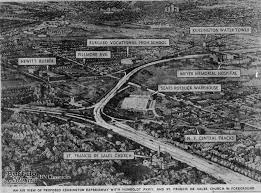 “The Kensington Expressway project represents a historic opportunity to reshape the City of Buffalo and reconnect communities that were severely impacted by the highway’s construction more than a half century ago,” Governor Kathy Hochul said.

“My administration is committed to delivering on bold infrastructure projects that will help right the wrongs of the past through transportation networks designed to bring communities together, and routes that are friendlier for pedestrians and bikers,” she added.

The budget also includes $30 million for the completion of the project’s Environmental Impact Study (EIS). The project has a broad support base from virtually all of Western New York elected officials and stakeholders.

“This billion dollar investment from New York State is a clear commitment to right the wrongs of decades ago by reconnecting the neighborhoods surrounding the Kensington Expressway, and restoring the vision that once united our greater community,” said Senator Tim Kennedy, Senate Transportation Committee Chair. “By prioritizing this project, we’re prioritizing vibrant, livable spaces that strengthen quality of life and celebrate togetherness. Today is a celebratory step forward for the advocates, including groups like the Restore Our Community Coalition, who have tirelessly rallied for these changes for years. Thanks to their work, and this significant commitment in this year’s state budget, we’re finally seeing this transformative project move forward thoughtfully and expeditiously.” 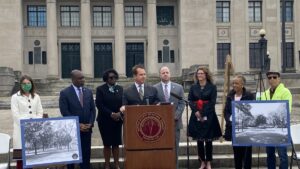 The news comes months after New York State Assembly Majority Leader Crystal Peoples-Stokes, Senator Tim Kennedy and Congressman Brian Higgins called for the New York State Department of Transportation to expedite the EIS, in order to be shovel-ready for any federal dollars from the Bipartisan Infrastructure Law.

All four leaders underscored the need for significant federal and state investment in the Expressway’s transformation in order to reconnect the surrounding neighborhoods and reimagine the vision for the historic parkway.

Assembly Majority Leader Crystal Peoples-Stokes said “Redesigning and covering Route 33 is a unique opportunity to address the generational harm done by the Kensington Expressway, when it tore into the Martin Luther King and Hamlin Park neighborhoods. These expressways have long severed and disrupted our communities and recreational spaces. Restoring these communities is a matter of racial justice, quality of life, environmental health, and community development. Prioritizing investments in the redesign of Route 33 will significantly help to correct these injustices. Eliminating these barriers would be a significant step towards reunifying neighborhoods in our city and healing decades-old wounds.”

The project seeks to redesign and fully cover a portion of Route 33 designated as the Kensington Expressway, to restore Frederick Law Olmsted’s vision for Humboldt Parkway while reconnecting the Hamlin Park, Cold Spring, and MLK neighborhoods. The project is seen rightfully by many as a way to correct past environmental injustices for communities of color that primarily reside in the neighborhoods that the highway has separated.

Congressman Brian Higgins said, “Transportation mistakes of the past stunted opportunities for Buffalo and its residents. This is a transformational moment and investment. Through this restoration project we are connecting neighborhoods, piecing together parks, growing economic opportunity, and improving the health and life quality of residents. The benefits will be far-reaching and lasting. Efforts to restore divided communities are a federal priority, and Buffalo is poised to lead the way.”

These reclamation-type projects have become more popular in recent years as state and federal governments, alongside social justice advocates who seek to right historical wrongs of environmental injustices that have negatively impacted low-income communities nationwide by way of increased traffic and pollution which led to many health complications (cancers, lupus, asthma), environmental issues, and decreased property values.

All images courtesy of the Office of the New York Governor.