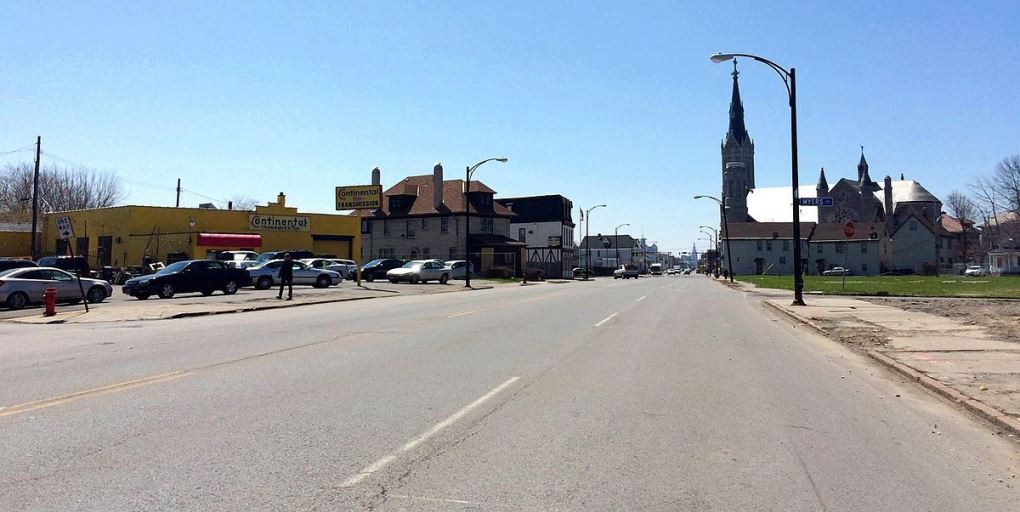 But it has not been on par with the rest of Buffalo’s revitalization, which has been reported regularly here in REVITALIZATION over the years. Now, there’s a good chance that might be about to change.

Funding will help to revive traditional main streets and commercial corridors through the preservation of historic buildings, funding of capital improvements in neighborhood assets, expansion of commercial opportunities, improvements to infrastructure, as well as the promotion of mixed-use private investment in these neighborhoods.

Senator Tim Kennedy said, “This investment of tens of millions of dollars on the East Side of Buffalo is exactly what we need. Our community’s commercial corridors are vibrant and diverse, and with this focused effort we can begin to unlock their true potential to build up our neighborhoods, making Buffalo an even better place to live. The Buffalo Billion II continues to pay dividends by targeting state investment into local communities and I was proud to fight for its inclusion in the state budget.”

“Commercial corridors like Buffalo’s East Side play a significant role in the vitality, livability and character of our cities,” Governor Cuomo said. “In recent years we’ve made significant investments to build a new Buffalo including workforce training, and today we’re announcing another $50 million in the East Side to build on those assets and ensure all the arrows continue to point in the right direction.”

“With this significant investment in Buffalo’s East Side, we are continuing our commitment to ensure that every neighborhood takes part in the economic recovery happening across Western New York,” said Lieutenant Governor Kathy Hochul. “For decades, we witnessed jobs and businesses disappear and East Side residents lose hope. I have seen firsthand how we are rebuilding that hope with projects like the Northland Workforce Training Center, which is providing new opportunities for good paying jobs. We are taking the next steps by allocating even more resources to strengthen neighborhoods, improve infrastructure, and build a better future.”

Through an analysis of economic and land use data, a look at past investments, and in-depth stakeholder engagement, ESD worked with the City of Buffalo’s Office of Strategic Planning to identify nine target areas along the four East Side Commercial Corridors where the funding will be focused to create a holistic and sustainable approach to revitalization and a unifying voice for the community.

East Side Corridor Economic Development Fund allocations are in these categories:

In July 2017, Governor Cuomo dedicated $10 million of a $60 million allocation towards the “Buffalo Neighborhood Stabilization Initiative,” leaving $50 million to revitalize its commercial corridors. Working with other public and private funders, the Fund seeks to create a holistic and sustainable approach to revitalization and a unifying voice for the community.

Gil C. Quiniones, NYPA president and CEO said, “NYPA has been a strong advocate for the development of Buffalo’s eastside, supporting several local businesses and organizations with economic development investments over the years. NYPA, in coordination with ESD and under the direction of Governor Cuomo, has been steadfast in its support and will continue to seek out future opportunities to spur investment in this important community.”

Assembly Majority Leader Crystal Peoples-Stokes said, “I’d like to congratulate today’s awardees from the Governor’s East Side Economic Development Fund. Michigan, Jefferson, Bailey, and Fillmore Avenues will get $50 million to help towards their revitalization efforts. Funds will help with long overdue infrastructure, capital repairs, business development, new housing, and in turn create economic opportunities for residents. I look forward to watching the strengthening and transformation of our commercial corridors.”

The announcement was made at the recently opened Northland Workforce Training Center (NWTC), the anchor of the Northland Corridor. As a signature workforce development initiative, NWTC is an industry-driven, public-private partnership between employers, educational institutions, community and faith-based organizations, and state and local government.

The NWTC is focused on closing the skills gap of the local labor pool and creating economic on-ramps to training, co-ops, internships, apprenticeships, and permanent employment in advanced manufacturing and energy careers, targeted at some the most underrepresented groups in the region’s current workforce.

Erie County Executive Mark Poloncarz said, “Unfortunately decades of disinvestment by both business and government resulted in Buffalo’s East Side falling significantly behind other areas of the greater community. While there are still many issues to address, I commend Governor Cuomo for his investment of $50 million in various neighborhoods and projects that are essential to the core of Buffalo’s eastside. Hopefully the East Side Corridor Development Fund will act as a catalyst and spur additional private sector investment, unlike other attempts which have failed in the past.”

The NWTC facility is being funded with $44.1 million from Empire State Development as part of a larger $127 million investment in the Northland Corridor Redevelopment Area Project, and $15 million from the New York Power Authority. ESD and NYPA are partnering with the Buffalo Urban Development Corporation (BUDC; a City of Buffalo-sponsored local development agency), which is serving as developer for the project as well as the larger Northland campus.

City of Buffalo Mayor Byron Brown said, “I am very grateful Governor Cuomo has announced $50 million in targeted investment to continue the revitalization of Buffalo’s East Side through the East Side Corridor Economic Development Fund. These funds will support the economic resurgence of Buffalo’s East Side, best demonstrated by the success of the Northland Workforce Training Center, and the growth of that corridor in an area of the City which has suffered from a disproportionate allocation of resources for decades. This will significantly help progress in every neighborhood.”

Photo (by Andre Carrotflower via Wikimedia Commons) shows Genesee Street on the East Side of Buffalo in April of 2015.

Learn more about these investments in the East Side Corridor Economic Development Fund (PDF).