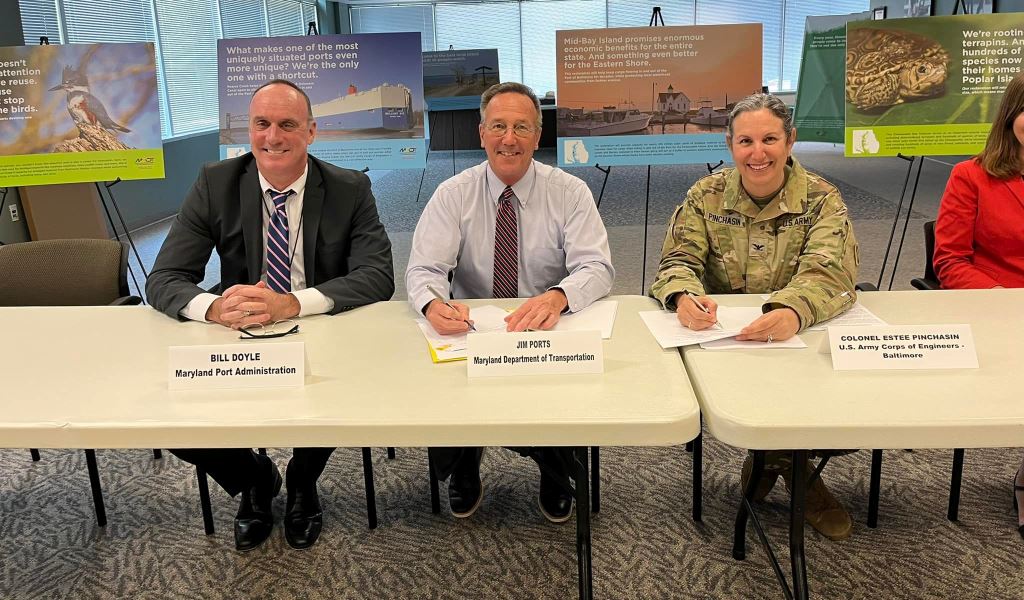 Long-time REVITALIZATION readers will probably remember our coverage of the Poplar Island restoration project in Chesapeake Bay, which might be the U.S. Army Corps of Engineers‘ (USACE) proudest ecological restoration success story.

Using a technique called “beneficial use of dredge” (documented in the 2002 book, The Restoration Economy), the restoration and rebuilding process uses material dredged from ports and waterways.

Prior to the adoption of this practice, those materials were barged out to sea at huge expense (in both money and carbon) and dumped in locations that often destroyed oyster reefs, coral, seagrass beds and other vital habitat.

Today, that material is used to rebuild damaged islands and shorelines, turning a destructive practice into a regenerative one that also saves money and greatly reduces carbon emissions. 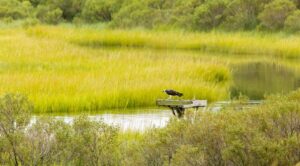 An osprey fishes on the restored Poplar Island. Photo courtesy of USACE.

The PPA—signed by Col. Estee Pinchasin, Baltimore District commander, and MDOT Secretary James F. Ports, Jr.—outlines the roles, responsibilities, and financial obligations for both partners for the restoration of both James and Barren islands in Dorchester County, beneficially re-using material dredged from the Port of Baltimore approach channels and the Honga River, respectively.

The first contract for phase one on Barren Island is anticipated for award in the coming weeks.

“It’s an honor to sign this agreement signifying ‘all systems go’ for this critically important project that will provide so many environmental benefits for Maryland,” said Maryland Transportation Secretary Ports.

“Rebuilding James and Barren islands will promote wildlife, restore coastal shorelines, and provide us with a long-term placement site for dredged material from port shipping channels, allowing us to accommodate larger ships bringing more cargo and business to Maryland,” he added.

Every year, USACE dredges nearly five million cubic yards of material from the channels and anchorages serving the Port of Baltimore to maintain current depths and widths for safe navigation. Once the material is removed, it must be contained or disposed of in an environmentally conscious manner.

“With this project, we hope to build upon the success of Poplar Island,” said Pinchasin.

“The habitat we restored and created using dredged material is flourishing. We are proud to partner again with the Maryland Department of Transportation’s Port Administration and employ innovative solutions that benefit the Chesapeake Bay’s ecosystem today and will do so for generations to come,” she continued.

USACE received more than $80 million in funding from the Bipartisan Infrastructure Law to complete the design and preconstruction activities for this project, to include the first construction contract award.

“We are very excited to work closely with Col. Pinchasin and her outstanding team at the Army Corps of Engineers, Baltimore District, on this legacy initiative,” said Maryland Port Administration-Port of Baltimore Executive Director William P. Doyle.

“The Mid-Bay project is the next frontier for coastal and island restoration. It will give us dredged sediment placement capacity for 30 years and strengthen the shoreline of Dorchester County,” he explained.

Based on the current schedule, Barren Island may start to accept dredged material as early as 2024 with James Island accepting in approximately 2030, after sill and dike construction efforts to hold the material are completed at each location.

The Mid-Bay project is anticipated to be completed in 2067 – providing more than 40 years of capacity to place almost 100 million cubic yards of dredged material.

Poplar Island, the ongoing ecosystem restoration project by USACE and MDOT MPA, wrapped up construction of an expansion effort in January 2021. The expansion provides substantial ecosystem benefits and additional dredge material capacity for the approach channels to the Port of Baltimore until 2032.