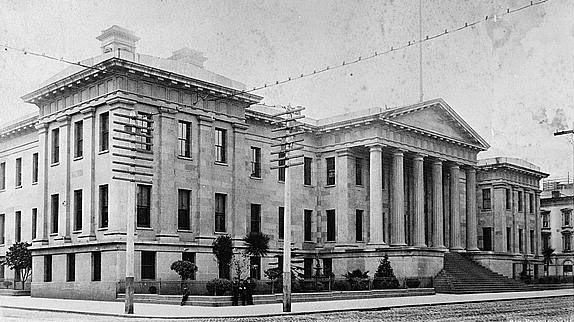 The state of California has awarded a $1 million grant to the nonprofit California Historical Society to help develop a plan to revitalize San Francisco’s historic Old Mint building, in partnership with the city.

The city will also contribute money — probably around $500,000 — to work on a planning blueprint that would turn the 142-year-old granite landmark at Fifth and Mission streets into what the city hopes will be a center for culture and learning.

The grant and the city contribution will allow the California Historical Society to develop plans for a complete assessment of the project, including how to finance it, how to line up public and private partners, and how to turn the old building into what is vaguely described as “an important cultural, learning and historical center.”

The San Francisco Mint is a branch of the United States Mint and was opened in 1854 to serve the gold mines of the California Gold Rush. It quickly outgrew its first building and moved into a new one in 1874. This building, the Old United States Mint, also known affectionately as The Granite Lady, is one of the few that survived the great 1906 San Francisco earthquake. It served until 1937, when the present facility was opened.

Within the first year of its operation, the San Francisco mint turned $4 million in gold bullion into coins. The second building, completed in 1874, was designed by Alfred B. Mullett in a conservative Greek Revival style with a sober Doric order. The building had a central pedimented portico flanked by projecting wings in an E-shape; it was built around a completely enclosed central courtyard that contained a well—the features that saved it during the fire of 1906, when the heat melted the plate glass windows and exploded sandstone and granite blocks with which it was faced.

The building sat on a concrete and granite foundation, designed to thwart tunneling into its vaults, which at the time of the 1906 fire held $300 million, fully a third of the United States’ gold reserves. Heroic efforts by Superintendent of the Mint, Frank A. Leach, and his men preserved the building and the bullion that then backed the nation’s currency. The mint resumed operation soon thereafter, continuing until 1937.

In 1961 the Old Mint, as the second building had become known, was designated a National Historic Landmark. It also became a California Historical Landmark in 1974.