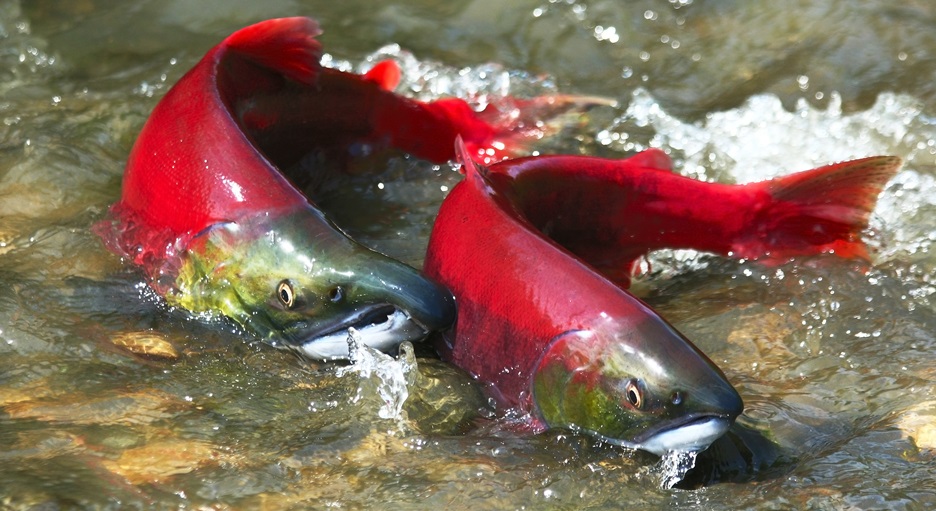 The native salmon of the McCloud River watershed in northern California—and the native Winnemem Wintu people of that same area—faced eradication during the California Gold Rush.

State and federally financed militias, driven by propaganda that painted Native people as subhumans in need of extermination, hunted tribal people. Meanwhile railroad construction and hydraulic gold mining, which sucked up streams and blasted away entire mountain sides, devastated many salmon runs. By 1872, the McCloud River was one of the only salmon spawning river left in the entire valley.

That led fish culturist Livingston Stone to establish the country’s first Pacific coast hatchery on the McCloud River. With the goal of augmenting declining Atlantic salmon and establishing new runs abroad, Stone and a group of Winnemem hatchery workers collected millions of salmon eggs and exported them to over 30 states and 14 countries.

The Winnemem Wintu learned in 2004 that these McCloud salmon eggs established a thriving and healthy run in the Rakaia River in New Zealand, and they have been fighting to return them home ever since.

The 300-mile Run4Salmon is a two-week event every September. During Run4Salmon, described by the tribe as a “prayerful journey,” participants run, bike, paddle, and ride horses along the path Chinook salmon once traveled from the Sacramento-San Joaquin Delta up the Sacramento River to the McCloud River, the Winnemem Wintu’s ancestral watershed.

McCloud River salmon runs have been blocked since the 600-foot Shasta Dam was built during World War II. The dam, now operated by the U.S. Bureau of Reclamation, flooded Winnemem homelands and left many homeless.

In early 2016, the tribe submitted a plan to federal and state agencies to return the New Zealand McCloud salmon to the river by developing a spawning route using two natural creeks that flow around Shasta Dam. A passage would have to be built so the salmon could swim to the ocean and back to the McCloud River without human intervention.

However, the Bureau of Reclamation, without consulting the Winnemem Wintu, developed a pilot project in 2015 to return Sacramento hatchery salmon above Shasta Dam using a dual trap-and-haul method. In this practice, juvenile and adult salmon would be captured and moved around the dam in trucks or boats.

The tribe has objected to this plan, arguing the hatchery fish are far less fit than the wild salmon in New Zealand and that trap and haul would interfere too greatly in the salmon’s unique life cycle. The tribe’s assertions are backed by recent research.

Now, the Run4Salmon movement is building a stronger base of support, which has helped the Winnemem make tangible progress toward returning their salmon.

Now, the Bureau of Reclamation is considering the Winnemem Wintu’s plan. This summer, the Bureau allocated $200,000 to collect New Zealand salmon samples for DNA testing. The tribe raised an added $78,000 to support the project through a viral GoFundMe campaign—featuring endorsements from indigenous leaders such as Winona LaDuke and Dallas Goldtooth.

After a seven-year campaign to get the attention of federal agencies, the Winnemem Wintu Tribe is poised to take a major step in bringing home the descendants of the McCloud River Chinook salmon from the rivers of New Zealand. With California salmon runs at risk of extinction, they partnered with GoFundMe to fund the first phase of our project before it’s too late.

At a time when climate change, dams and industrial water extraction for Big Ag threaten the future of California’s salmon, federal biologists agree with the Winnemem Wintu that salmon must return to the glacial waters of the McCloud River above Shasta Dam in order to survive.

This helped fund the collection of samples of the winter-run salmon in New Zealand. UC-Davis fish biologists will perform DNA testing on these samples to prove to the federal government that these are indeed the direct descendants of the McCloud River winter run salmon.

This will be the first phase of the Winnemem’s plan to bring home the wild chinook salmon that once ran in the millions and were the center of the tribe’s spiritual and cultural world. More than 70 years since the last salmon spawned in the McCloud River, they’re asking good hearted people to join them in their historic efforts to return the salmon through a plan based on indigenous leadership and traditional ecological knowledge.

After years of meetings with the US Bureau of Reclamation and NOAA Fisheries and a successful lobbying during the 2016 Run4Salmon, the Bureau of Reclamation agreed to support the tribe’s project by setting aside partial funding for the first phase in support of the sample gathering. The tribe’s ultimate plan for the salmon’s return involves building a swimway using existing creeks around the dam to the McCloud River so the salmon can be restored to their rightful place in the natural world.

To build support last fall, Chief Caleen Sisk led the Run4Salmon, a two-week journey tracing the historical path of our salmon from the mouth of the Bay-Delta estuary to the McCloud River. The Run4Salmon was a prayer for the protection of the waters, the restoration of the salmon and continuance of indigenous lifeways that are currently under attack by Gov. Jerry Brown’s Delta Tunnels proposal, Bureau of Reclamation’s proposal to raise the height of Shasta Dam, and other mega-projects that would further degrade the rivers and estuary the salmon need to survive.

“Before Run4Salmon, we figured out there hadn’t been a salmon ceremony in our Ohlone territory for over 200 years,” said Corrina Gould, a Chochenyo and Karkin Ohlone activist who organized the opening ceremony. “We’re in a time where songs are coming [back], language is coming back, ceremony is coming back, and the return of the salmon is a part of that indigenous restoration we need for the future.”