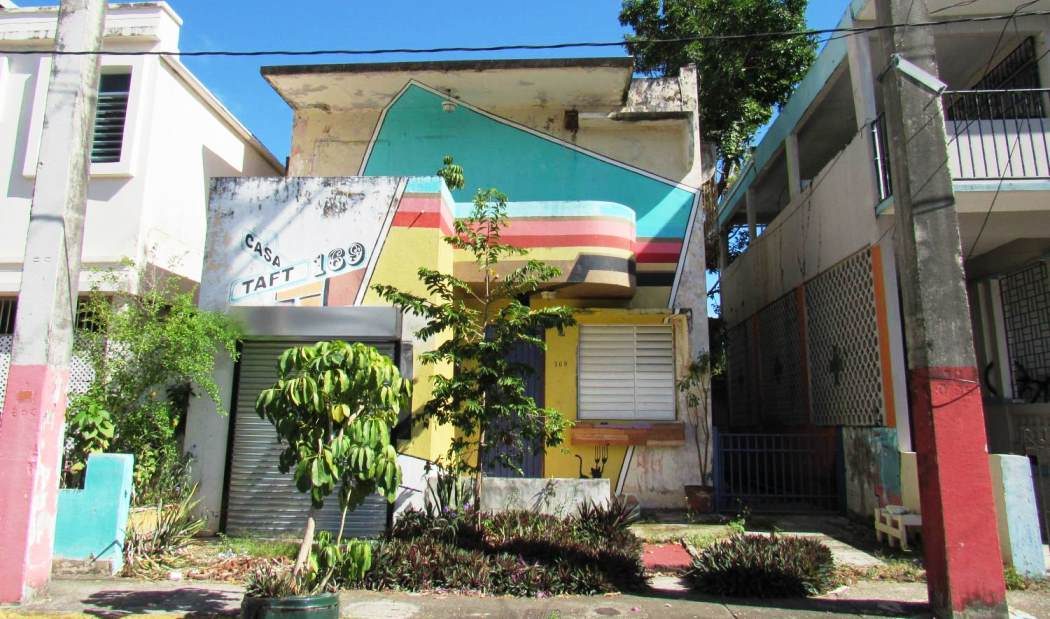 Walking through the hip San Juan neighbourhood (barrio) of Machuchal, it is hard to miss the house painted bright yellow, green and red, with a sign on the side reading “Casa Taft 169”.

The building in the Puerto Rican capital had been abandoned for nearly 40 years and was declared a “public nuisance” by the municipal government before a group of local lawyers and residents rescued it from demolition.

Since buying the house in 2013, the group has been transforming it into a centre for neighbourhood meetings, talks by guest speakers, and civic workshops to help locals become more politically involved.

“We wanted to level the playing field with the government and say, ‘You need to take us into consideration'” when deciding the fate of abandoned homes in the area,” explained Marina Moscoso, an urban planner and the project’s coordinator.

Now residents say that quality of life is under threat from increasing tourism and rising rents that are pushing out young people and poorer families, as the U.S. island territory struggles to recover from a hurricane two years ago that killed some 3,000 people (thanks in large part to a criminally-incompetent response from Washington, DC – Storm Cunningham).

Former Puerto Rico Governor Ricardo Rossello—who resigned on July 24, 2019 after 11 days of protests against his administration—with an estimated 500,000 people taking to the streets of San Juan on Monday.

The national government has highlighted tourism as an economic engine in Puerto Rico’s 2019 fiscal plan, to help the bankrupt U.S. territory recover after Hurricane Maria caused an estimated $90 billion-worth of damage.

Attracting businesses and travellers is key to reviving parts of Puerto Rico and benefits “not only residents but also outside visitors,” according to Yolanda Rosaly, spokeswoman for the Puerto Rico Tourism Company, a governmental organisation. “The city becomes more dynamic and the value of properties rise,” she said in emailed comments.

And Moscoso is afraid that the work the community has been doing to revive places like Casa Taft was what started the process. 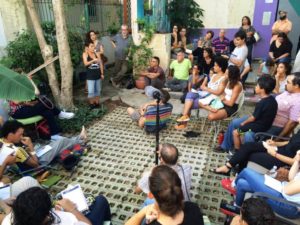 In recent years, starting before Hurricane Maria hit, the national government has passed laws and tax cuts designed to encourage outside investors.

That includes the opportunity zones program, which gives tax breaks for development aimed at tourism in designated low-income areas.

Most states can only designate up to a quarter of their low-income neighbourhoods as opportunity zones.

But according to a report by the Centro de Periodismo Investigativo, an investigative journalism organisation, Puerto Rico Resident Commissioner to the U.S. Congress Jenniffer Gonzales-Colon and lobbyists managed to get about 95% of Puerto Rico designated an opportunity zone.

Officially re-zoning areas in this way makes it easier for businesses to get permits, Rosaly said.

But community rights advocates say development that caters to the tourism industry tends to generate mainly low-income, low-skilled jobs and, at the same time, pushes up rental prices beyond the reach of many families.

More likely to benefit are short-term rental companies like Airbnb or Lifeafar, say housing activists, as developers take advantage of tax incentives and buy up homes with the sole purpose of renting them out to tourists.

Marina Reyes-Franco, an art curator who lived in the district of Old San Juan before moving to Barrio Machuchal, said she has seen this phenomenon first hand. In her previous neighbourhood, she saw developers take over entire buildings and even entire blocks with an eye on the home-sharing market. “My friends’ leases were being cancelled or not being renewed because the owners felt they wanted to do short-term leases instead of renting,” she said.

According to data from AirDNA, an analytics organisation with offices in the U.S. and Spain, there has been a sharp spike in Airbnb rentals in the Machuchal neighbourhood over the past five years. “Those could have potentially been apartments for families to rent,” Reyes-Franco said.

Moscoso said some of the recent interest in neighbourhoods that used to be off the tourist track is a result of projects like Casa Taft, when communities revitalise empty lots and abandoned houses to bring life back to rundown areas.

“The tricky part about squatting and rehabilitating and starting these fancy projects … is those kinds of initiatives end up being (like) promotion,” she explained. “We sort of served as a start for gentrification.”

But Barrio Machuchal locals said the transformation from cultural hub to tourist hotspot is happening too fast, without regard for the people who live there.

The area around Barrio Machuchal, La Calle Loiza, was zoned as a gastronomic district in 2018, but now residents complain that they are plagued daily by noise, rubbish and lack of parking.

“Every day there are more businesses and it’s become the hangout spot for the island … people are constantly complaining that cars are blocking their homes,” said Reyes-Franco, the art curator.

According to documents seen by the Thomson Reuters Foundation, the government has plans to rezone La Calle Loiza again, officially changing it into a tourist zone.

Residents and business owners said that they had not heard anything about the plans, but Rosaly, the spokeswoman for the Puerto Rico Tourism Company, said they consulted with people in the area. “We have spoken with some business people from the area and they approve of this change,” she said.

The planning board is due to publicly announce the rezoning of several municipalities around Puerto Rico as tourist areas, including San Juan, in the next few weeks.

A MODEL FOR OTHERS

As the residents of Barrio Machuchal deal with the impact of rising tourism, the group behind Casa Taft’s rebirth are hoping their house can provide a model for other communities.

In 2016, the group used some grant money to successfully lobby the government to make it easier for non-profit and community-lead organisations to claim houses which would otherwise be labelled for demolition.

The law now allows non-profits to buy an abandoned home without having to pay all of the back taxes. The catch is the house has to be used for a community-focused purpose, such as a civic centre.

But it has become clear that what the neighbourhood really needs is more affordable homes, said Moscoso.

So, the group is looking for ways to turn other abandoned homes into cooperative housing units, in order to resist what Moscoso calls the “violent touristification” of the area.

“In the end, we were the ones who put Barrio Machuchal on the map,” she said. “We did not want to start a gentrification process, but that was what actually happened.”

(Funding for this story was provided by the Pulitzer Center.)

This article by Isabel Sophia Dieppa, Kari Lydersen and Martha Bayne (edited by Jumana Farouky and Zoe Tabary) originally appeared on the website of the Thomson Reuters Foundation, the charitable arm of Thomson Reuters. Reprinted here (with minor edits) by permission.