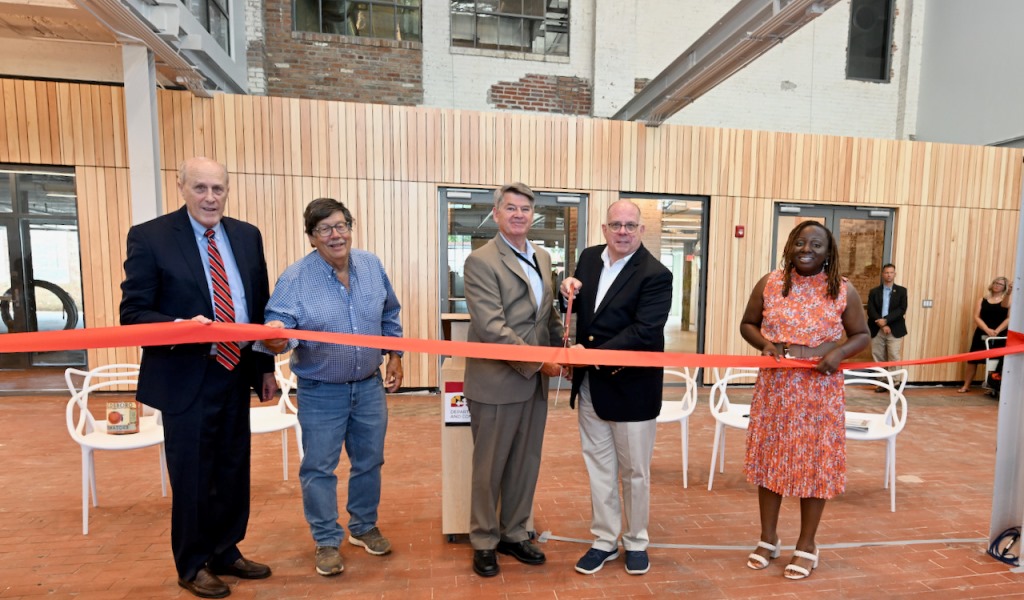 On June 10, 2022, Maryland‘s governor, Larry Hogan, visited the city of Cambridge to celebrate a number of milestones in the ongoing revitalization of the city.

Three of the redevelopment projects driving that revitalization received over $20 million in state funding.

The governor, who was joined by Secretary Kenneth C. Holt of the Maryland Department of Housing and Community Development (DHCD) and Acting Cambridge Mayor Lajan Cephas, also made several announcements related to future local and statewide economic revitalization initiatives.

“With all of the announcements we have made in Cambridge today—from cutting the ribbon on the redeveloped Phillips Packing House, to breaking ground on Cambridge Harbor, and launching the development of Mace’s Lane Community Center—we are honoring the commitment we made eight years ago when I was first running for governor,” said Governor Hogan.

“I said then that if I was elected, the war on rural Maryland would be over, and that communities like Cambridge that had been ignored and neglected would no longer be forgotten. I meant what I said, and our administration has consistently proven that over and over again, and we are doing that here once again today,” he added.

Governor Hogan’s first stop in Cambridge was the repurposed and revitalized Phillips Packing House, where he cut the ribbon for DHCD’s new Eastern Shore satellite office and Community Engagement Center (pictured above).

The office and center will serve as anchor tenants in the redeveloped facility and will provide critical housing and community services and outreach to Eastern Shore residents. The remaining Packing House tenants will build on the Eastern Shore’s deep tradition of agriculture and aquaculture while providing modern tech and creative opportunities. 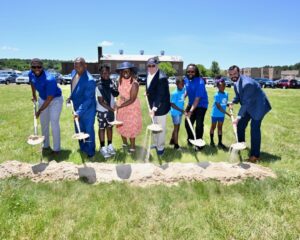 The governor participated in a demolition to mark the groundbreaking for Cambridge Harbor, a 35-acre waterfront redevelopment area alongside the confluence of Cambridge Creek and the Choptank River.

The redevelopment site includes the former Dorchester General Hospital and Governor’s Hall. The State of Maryland provided approximately $8 million for the project, which is managed by Cambridge Waterfront Development, Inc. (CWDI), an economic revitalization authority chartered by the city and Dorchester County to redevelop the waterfront in partnership with and for the benefit of the community.

With total redevelopment costs estimated at $250 million, Cambridge Harbor will feature a mix of new commercial and housing, while preserving the scenic vistas, green space for outdoor recreation, and working history of the waterfront. Visible from the nearby U.S. Route 50 bridge, the revitalized harbor will promote Cambridge as an attractive destination for tourists while providing economic, cultural, and recreational opportunities for residents. 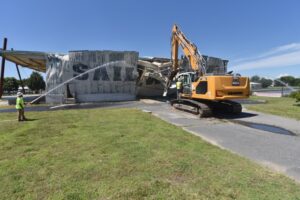 The new center will feature the Edythe M. Jolley Museum and Cultural Center, honoring the faculty and staff of Mace’s Lane High School and their role in the lives of local African American students in the pre- and post-20th century civil rights era.

The Boys and Girls Club will operate out of the center and provide outreach programs and recreational activities for the youth of Mace’s Lane and Cambridge. The center will further enhance the community by providing space for concerts, banquets, and other events, as well as programs and services.

The governor also announced that Cambridge has been awarded a $2.6 million Community Development Block Grant to fund infrastructure improvements to support the Homeownership Works initiative and create new homeownership opportunities in the nearby historic Pine Street community.

The governor announced that Project Restore will re-open statewide for applications in early July.

All photos courtesy of the Office of the Governor of Maryland.

Watch video of the governor’s remarks.