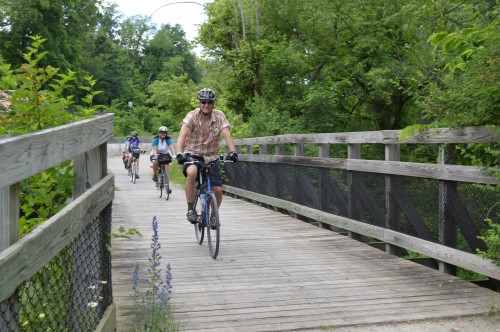 Driven by a regional coalition of trail groups, government agencies, funders and land managers, the Industrial Heartland Trails Coalition envisions a 1,450-mile system of off-road trails that will connect many of the major centers of America’s Rust Belt and industrial Appalachia.

The Rails To Trails Conservancy (RTC) has taken one of the lead roles in coordinating the new coalition, including helping to define the destination trail corridors that make up the network and assisting with the branding and ongoing promotional activities.

“I’m confident that the successful realization of this vision will have an amazing impact on our newly minted ‘Industrial Heartland,’” says Eric Oberg, RTC’s project manager for the Industrial Heartland Trails Coalition. “The many individual trail projects included in this vision have been amazing to watch mature and have already resulted in incredible benefits for their communities, and working to fill in the gaps between these trails has been nothing short of inspiring.”

The envisioned trail network will span 48 counties across four states, running through western Pennsylvania, northern West Virginia and eastern Ohio and reaching into the southwest corner of New York State. Pittsburgh will serve as the network’s hub, with trails radiating out of the metro area and connecting to Cleveland and Ashtabula in Ohio, Morgantown and Parkersburg in West Virginia, and Erie in northern Pennsylvania.

As massive and unimaginable as it sounds, this is essentially a project of building strategic, coordinated connections. Much of the framework is already in place and includes some of America’s most well-known and loved trails, including the Ohio and Erie Canal Towpath in Northeast Ohio, Three Rivers Heritage Trail and Montour Trail in Pennsylvania, and the North Bend Rail Trail and Mon River Trail North and South in West Virginia.

Combined, these trails already travel hundreds of miles throughout the nexus of the three states. They just don’t all connect to each other. Yet.