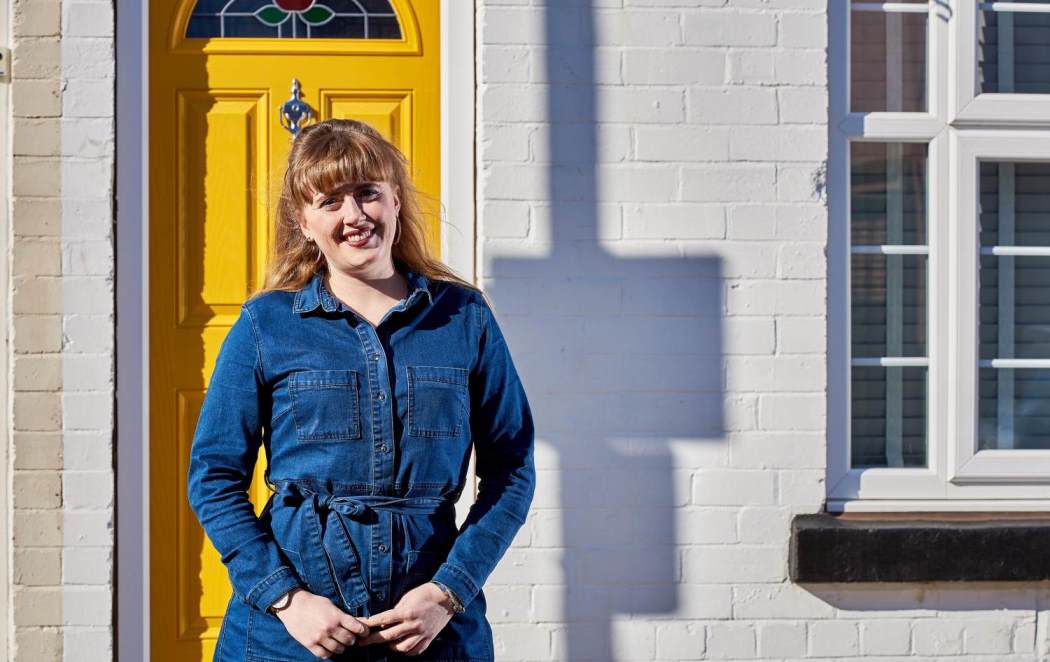 Graduate student Victoria Brennan knew she was taking a risk when she bought a home in a run-down neighbourhood in the northern English city of Liverpool for less than the price of a cup of coffee.

But the move has paid off, getting her onto the property ladder – something that would otherwise have been impossible.

“It seems mad … It sounded too good to be true,” said the 31-year-old, who got the keys to her dilapidated two-bedroom house in 2016. “It’s hard work, but actually if you’re prepared to put that hard work in … it’s going to be an amazing place to live,” she told the Thomson Reuters Foundation.

The one-pound ($1.25) homes program run by Liverpool City Council—the subject of a new TV documentary—is one of a handful of programs by cities across Britain and Europe searching for innovative ways to solve housing crises.

Selling homes for token sums has become a popular, last-ditch strategy for towns, cities and villages fighting depopulation and decay. The programs allow local authorities to fill empty homes and pass much of the costs of renovation to the buyer.

But there is a catch.

The properties, as with Brennan’s in Liverpool, are commonly in areas that face challenges from crime to anti-social behavior, economic deprivation and under-population.

Brennan said she had experienced theft, fireworks outside her home and her car windscreen being smashed on her largely abandoned street, after the houses on it were earmarked for demolition.

Inspired by Liverpool, authorities in the northern French town of Roubaix—which like the British city has been hit by industrial decline—have launched a one-euro housing scheme to encourage economic regeneration.

And in Italy, southern towns are auctioning homes with a starting price of one euro to fight depopulation. In May of 2019, bargain hunters from Argentina to China snapped up abandoned homes in the dying hilltop town of Sambuca. (as documented here in REVITALIZATION)

“Whether it is in Liverpool or Italy there are lots of examples of councils selling homes for a pound or a euro,” said Henry Pryor, a property expert. “It’s a great way to try and invigorate an area and to draw people back to parts of a town or city that have been abandoned.”

About 75 homes are occupied so far under the Liverpool scheme, with a further 33 under work and 13 more in negotiations, according to the council.

More than 2,500 people applied to join the scheme, which is no longer taking applications due to over-subscription. 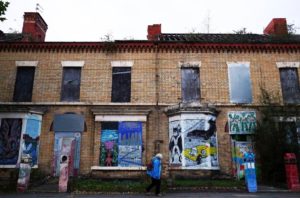 A woman walks past a row of derelict houses on Ducie Street in Liverpool, Britain, September 25, 2018. Photo: REUTERS/Hannah McKay.

Ibby Alasaly, her husband and two children live in a cramped home with her mother, who alerted her to the novel Liverpool scheme.

She signed up with few expectations, got the keys to her new home in June 2018, and hopes to move in later this year after lengthy renovations and delays due to legal restrictions.

“It’s definitely not as easy as it looks,” said Alasaly, who filled skips with fallen walls, broken plaster and debris. “It’s literally (building) everything from scratch. Things that I’ve never had to deal with before, like where do you want your plug sockets? Where’s your gas meter going?”

Liverpool devised the program after the national government pulled funding for renewal and refurbishment of public housing, leaving it with empty homes it could not afford to demolish, restore or replace, said Mayor Joe Anderson.

“What we have seen is something quite remarkable in terms of a community being rebuilt from scratch and residents investing a great deal of blood, sweat and tears into their new homes,” said Anderson.

He credited the scheme with helping to breathe new life into areas previously “haemorrhaging residents.” 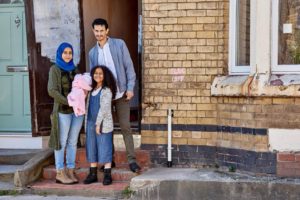 Not everyone is as impressed, however.

“While we applaud councils who give any run-down empty homes a new lease of life, they must ensure this is best meeting the needs of local people, and that it’s not done at the expense of delivering more social housing,” she said.

Shelter has said England needs a “historic renewal of social housing” and at least 3.1 million new social homes over the next 20 years if it is to plug the supply gap.

Since then, Britain has experienced years of chronic under-building, rising rents and cuts to benefits that have exacerbated housing shortages, say property experts.

Claire Masters, executive producer of the television series on the Liverpool program—The £1 Houses: Britain’s Cheapest Street—called it a “brave experiment” viewed by local governments in Britain and elsewhere as a possible blueprint.

“I don’t think it’s a gimmick at all,” said Masters, who has filmed participants since 2015 and has watched the council and residents adapt, butt heads, resolve conflicts and finally move in. It is something that is ambitious. “It’s a small price tag with some big risks.”

This article by Adela Suliman (edited by Claire Cozens) originally appeared on the website of the Thomson Reuters Foundation, the charitable arm of Thomson Reuters. Reprinted here (with minor edits) by permission.