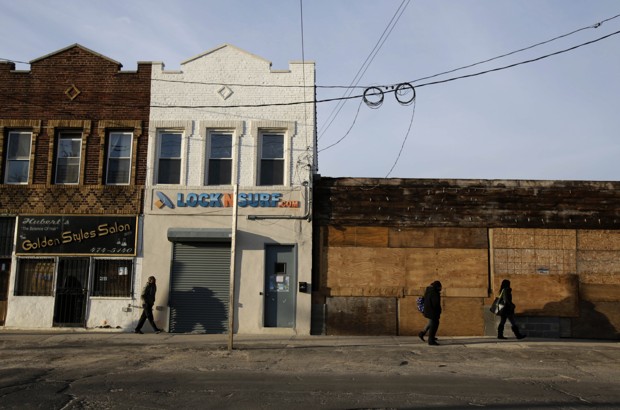 Most New Yorkers rarely go to the Rockaways.

Sitting just above sea level and surrounded by water, the narrow peninsula off the southeastern edge of Queens made horrific headlines after Hurricane Sandy: families stranded for days without food, seniors lacking water and electricity for months.

As the city’s memory of the storm has faded, so too has its attention on the 130,000 New Yorkers who live in the Rockaways. The area still hasn’t made a full recovery from the storm.

Luis Casco is one of those 130,000. Along with two other Rockaways natives and another friend from New York, he is a worker-owner at Luv Custom Prints, a co-op offering screen printing services to businesses and individuals in Rockaway and beyond.

Luv is part of the Worker-Owned Rockaway Cooperatives, or WORCs, a program that helps Rockaways residents develop co-ops to address the needs of their community.

WORCs emerged out of Occupy Sandy, an Occupy Wall Street offshoot that was the first aid organization to arrive—and, crucially, the last to leave—when the storm hit.

Four years later, that investment in community development is still paying off.

“[WORCs are] a network where we support each other, and the money stays in the Rockaways instead of going to Wal-Mart and never coming back,” Casco says of the WORCs. “It’s all people from the community trying to create something sustainable.”

Casco credits the initial success to locals and other co-ops who understand the importance of creating an ecosystem. “People already trust you, they already know the work you do, they want to support someone who understands their struggle.”