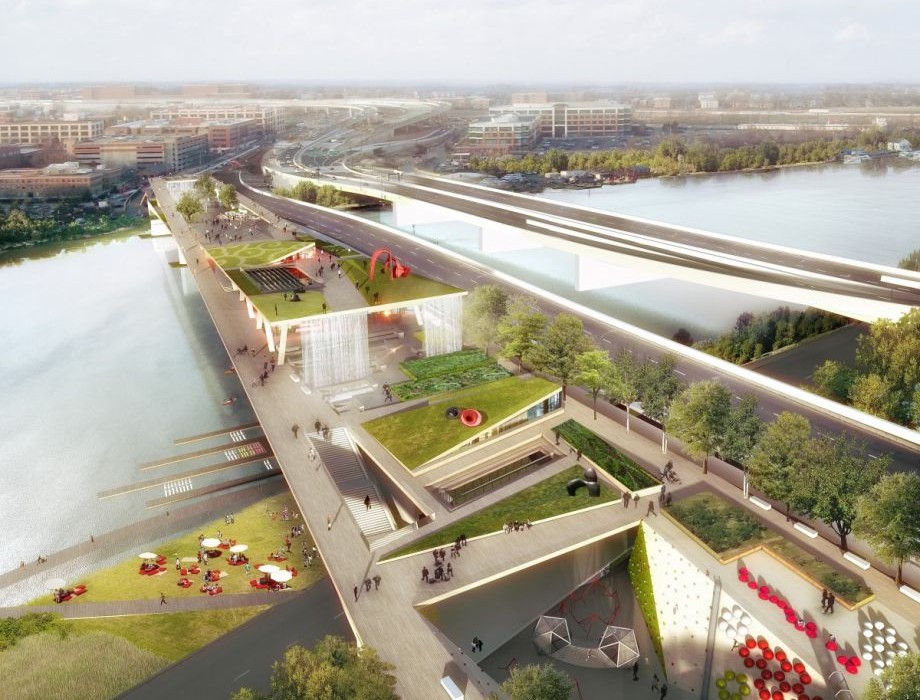 Note from Storm: A few months ago, I had a beer with Scott Kratz, dynamic director of this fabulous project to convert a derelict bridge into a revitalizing public park. The original idea came from the brilliant Harriet Tregoning, former director of DC’s Office of Planning (who now heads HUD’s Office of Economic Resilience).

Although there are certainly larger and more expensive waterfront redevelopment projects in Washington DC, this one is my favorite. That’s partly because it promises to benefit the most downtrodden part of the city. It’s partly because it will help accelerate restoration of the horribly-polluted Anacostia River. And it’s partly because the project is based on renewing, repurposing, and reconnecting. Those of you who have been reading the advance chapters of Resilient Prosperity that appear in each issue of REVITALIZATION know that this trio of activities are at the root of leading-edge regeneration projects worldwide.

From this article: The director of Washington, D.C.’s 11th Street Bridge Park project, Scott Kratz has been paying close attention to how comparable placemaking efforts — many of which are aspiring to the meteoric success of New York’s High Line — are playing out nationwide.

During a visit to Los Angeles last summer, Kratz became aware of the effect the open space restoration project around the L.A. River was having on local real estate prices. In the Elysian Valley neighborhood — near where the Army Corps of Engineers’ billion-dollar plans were still just pending — median home values had risen 21 percent over the course of a year, versus 16 percent citywide.

“That was just shocking to me to see the quickness of how fast that happened,” says Kratz, “and how the city is really struggling to address it now that the speculation has already begun.” Back in D.C., Kratz began to think about the really complicated ways the 11th Street Bridge Park might impact surrounding communities.