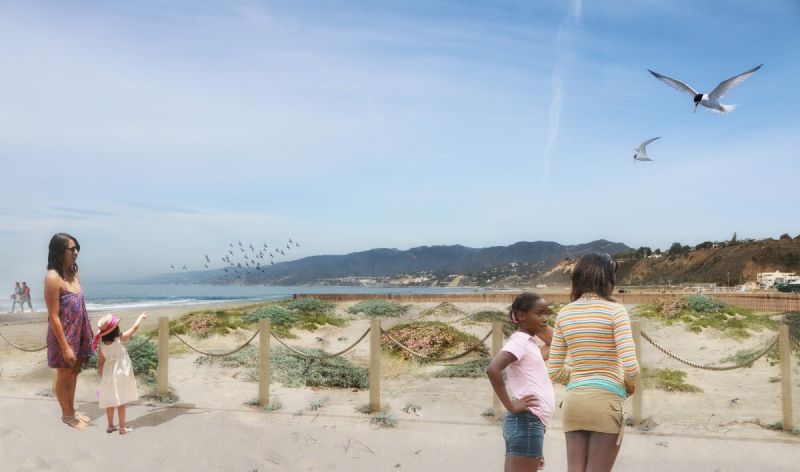 In California, Santa Monica’s famed beaches–birthplace of the mid-20th-century fitness boom–have been as intentionally sculpted as Arnold Schwarzenegger’s pecs.

In 1934, the same year that a New Deal program brought fitness equipment to what would become Muscle Beach, the city of Santa Monica installed an offshore breakwater that captured sediment and dramatically widened those beaches by hundreds of feet. 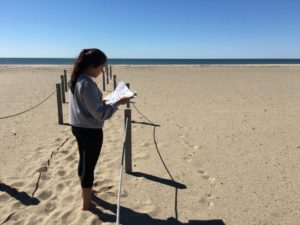 Today, with sea level rise and erosion threatening to eat away at the sandy expanses and damage city infrastructure, Santa Monica is testing a softer intervention.

In a partnership with the nonprofit Bay Foundation, 3 acres of the beach’s north end have been seeded with native California dune plants. If the pilot works as planned, over time hummocks of sand will build up around them, providing natural protection to the parking lots, bath houses and homes inland. risk.

“It’s interesting doing a restoration project on a sandy beach that never was there before,” says Melodie Grubbs, the Bay Foundation’s watershed programs manager.

“I think it’s very important to demonstrate on an urban beach that’s very heavily used that this is compatible with recreation use of the beach,” says Judith Meister, beach manager for the city of Santa Monica. The north end was chosen because of its relatively low traffic, but if the pilot is successful and well-received by residents, more dune plants could be seeded farther down the beach.

Since 1987, the Santa Monica Bay National Estuary Program (SMBNEP) has been one of 28 National Estuary Programs (NEPs). Established by Section 320 of the federal Clean Water Act, the NEPs are administered by the United States Environmental Protection Agency (U.S. EPA) which identifies estuaries of national significance, requires the development of plans to restore these estuaries, and provides grants to pay for activities necessary to implement the plan.

The SMBNEP’s comprehensive plan of action for protecting and restoring Santa Monica Bay, known as the Bay Restoration Plan (BRP), was approved by the U.S. EPA and the State of California in 1995 and updated in 2008 and 2013. The BRP includes goals, objectives, and milestones that guide SMBNEP’s programs and projects in three priority areas: water quality, natural resources, and benefits and values to humans. The BRP also identifies the responsible lead and partner entities, and the roles of the SMBNEP in supporting, promoting, and implementing Bay restoration work.

TBF is an independent, non-profit 501(c)(3) organization founded in 1990. The mission of TBF is to contribute to the restoration and enhancement of the Santa Monica Bay and other coastal waters. (www.santamonicabay.org). TBF receives an annual grant from U.S. EPA pursuant to section 320 of the Clean Water Act (33 U.S.C. §1330) to implement the BRP and to provide administrative, management, and program services to the SMBRC. TBF also receives important grants and donations from other entities to support TBF and its activities.

Images courtesy of The Bay Foundation.