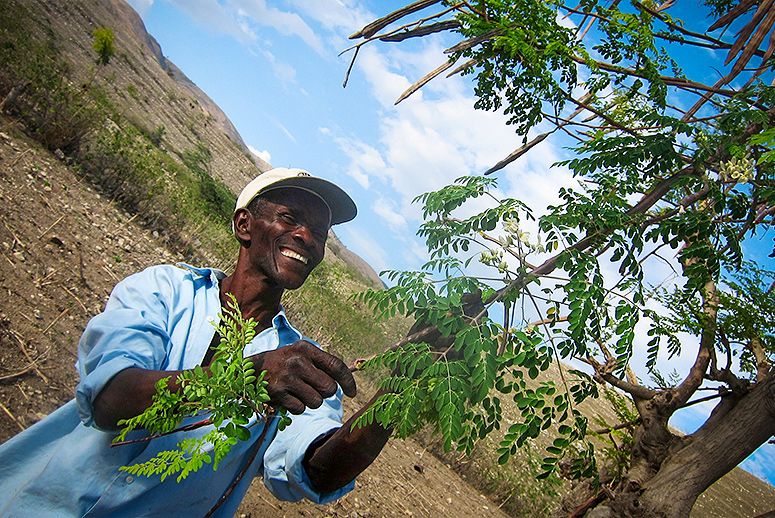 Haiti is the most impoverished country in the northern hemisphere, and trees, or the lack thereof, are part of the problem.

Some believe the answer could be moringa, a native of the Himalayan foothills in northwestern India and the latest imported ingredient anointed with “Superfood” status (see also: quinoa, acai, chia). The tree—called variously “the miracle tree,” “tree of life,” “mother’s best friend,” and the “never die tree”—can shoot from seed to 15-foot stature in the span of a year; flourishes in hot, dry subtropical climates; and can be put to use from root to pod.

Nutritionally, moringa has more calcium than milk, more vitamin C than oranges, more vitamin A than carrots, more iron than spinach, more potassium than bananas, and just as much protein as eggs.

Could two of Haiti’s problems—deforestation and poverty—be solved by moringa? It’s a potential solution floated by Oakland-based social enterprise company Kuli Kuli, in a partnership with the Clinton Foundation and a Haitian nonprofit, the Smallholder Farmers Alliance, to develop a new moringa supply chain in Haiti.

But while its nutrition benefits are irrefutable, is mass-planting moringa the right reforestation tactic for Haiti? S. Blair Hedges, director of the Center for Biodiversity at Temple University, doesn’t think so. “A forest full of native Haitian species would do much better in stopping erosion, protecting water resources, and providing food, shelter, and energy for the Haitian people,” he says.

^^^^^^^^^^^^^^^^^^^^^^^ Note from Storm: Haiti doesn’t need to choose between moringa and native forest restoration. With proper advice from qualified restoration ecologists, it’s very likely that moringa could be used as a pioneer species to stabilize soils, restore watersheds, and provide shade for native seedlings. It wouldn’t be the first time that non-native trees laid the foundation for ecological restoration. Agroforestry is good. Restorative agroforestry is better.