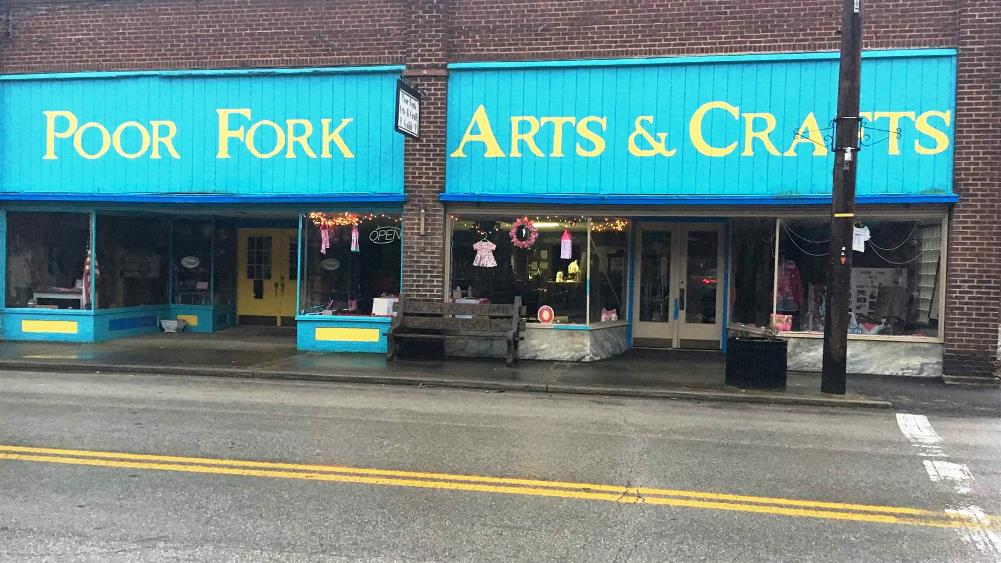 The same Main Street winds through the old mountain mining towns of Cumberland, Benham and Lynch, crosses a river and runs alongside a creek. The early 20th century coal mining boom drew people to this remote corner of southeast Kentucky, until coal’s dizzying decline sent them away.

Today, Main Street hints at a roaring past and the potential for change.

Poor Fork Arts & Crafts, which sells Appalachian handcrafted and vintage items, the Back Street Bar and a senior center sit alongside empty storefronts, vacant lots and boarded-up spaces. Pizza Hut and Hardee’s rival locally grown Dairy Hut Too and Charlotte’s Hoagie Shop. Visitors can tour an underground coal mine in what was once the largest company-owned coal town in the world.

Coal’s decline has changed what locals call the Tri-Cities, but some things endure: Black Mountain, the state’s highest, looms over Lynch. Cumberland’s Kingdom Come State Park, with its scenic overlooks and natural rock formations, sits atop Pine Mountain. The region is laced with dozens of walking and biking trails. The area’s mining heritage, and the grit and faith of the people who relied on mining for so long, are tangible here.

The Tri-Cities are counting on their natural beauty, history and culture to reinvent themselves as tourist destinations. But with a small and declining population, a remote location and limited funding, it won’t be easy.

“Coal mining built this community, and this community is totally worth saving,” said Cumberland Mayor Charles Raleigh. “Now we have to find a way to stay without them.” 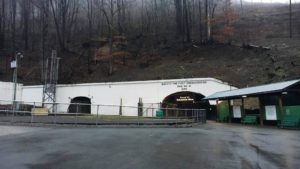 The tourism and travel industry contributed more than $15 billion to Kentucky’s economy in 2017, according to a report from Kentucky’s Tourism, Arts and Heritage Cabinet.

In what Kentuckians call Daniel Boone Country, comprising 18 southeastern counties, tourists spent nearly $350 million in 2017, up almost 4 percent from 2016. In Harlan County, home of the Tri-Cities, tourism revenue increased by 14 percent to $26.5 million, according to the report.

Shaping Our Appalachian Region (SOAR), a nonprofit that state and federal officials helped create in 2013, emphasizes the importance of tourism in the regional blueprint it produced in 2016.

Tourism alone won’t sustain a community, even if it is an economic driver, acknowledged SOAR Executive Director Jared Arnett. But he argues that taking steps to boost tourism, such as improving the housing stock, rebuilding downtown, focusing on the arts and updating tax codes, will not only attract visitors, but make spaces more livable for the next generation.

He pointed to the small town of Abingdon, two hours east of the Tri-Cities, and the larger Southwest Virginia region, home to Virginia’s coal mines. Abingdon took a similar approach and began to see its population of young adults increase and a bubbling up of entrepreneurial activity, Arnett said. Like Kentucky’s Tri-Cities, Abingdon has popular trails and an arts and crafts community. It’s also home to several programs that connect and support smaller communities across Southwest Virginia.

“This is an opportunity to reinvent ourselves,” Arnett said.

Republican state Reps. Adam Bowling, who represents Harlan County, and Tommy Turner, who represents parts of Laurel and Pulaski counties, west of Harlan, sponsored a bill this legislative session that would increase the rehabilitation tax credit from $5 million to $30 million annually, which supporters say would be a boon to historic preservation and stimulate downtown investments.

In October 2018, the Tri-Cities also received a $2.55 million federal Abandoned Mine Lands Pilot Grant to help cultivate the tourism economy. Local officials will use that money to upgrade the audiovisual system and infrastructure at the Portal 31 Exhibition Mine Tour in Lynch.

That grant also will pay for the restoration of the old stone bath house where miners showered before heading home, and the renovation of a nearby administrative building, both of which a Christian ministry will use to expand its mushroom-growing business. Renovations also will provide space for a coffee roasting company and dulcimer instrument factory.

At Black Mountain, funds will go toward a new parking area with a scenic overlook and potentially a 40-foot observation tower.

The Tri-Cities advertise their offerings through several Facebook pages, billboards in Kentucky, Virginia and Tennessee, and a Harlan County website that’s about to get a redesign, said Tracy Bailey, director of tourism for the city of Cumberland.

Local tourism officials also are looking into hosting tour groups from nearby counties to showcase the area’s history, culture and recreational activities, Bailey said. But she acknowledges that, because the Tri-Cities are far from a commercial airport or major highway, it will be a challenge.

“We would love to make it a destination, but we do have those issues,” said Bailey, who has lived her whole life in Lynch. “You’ve got to know where you’re going to get to us.” 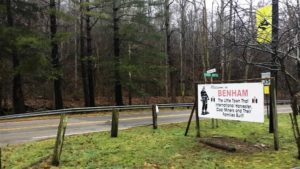 Coal company towns like Benham and Lynch sprung up out of the woods. In 1911, Wisconsin Steel, a subsidiary of International Harvester, began developing Benham, and in 1917, U.S. Coal & Coke Company, a subsidiary of U.S. Steel, developed Lynch. Each would have its own schools, post offices, commissaries, entertainment and housing.

Lynch eclipsed Benham and Cumberland with a population that reportedly peaked at 10,000 and included people of 38 nationalities. Lynch’s population declined to 1,517 in 1970, and to 546 in 2017, which is roughly the same as Benham’s.

The Tri-Cities rose and fell with the fortunes of the coal industry. Violent labor clashes through the 1930s that ultimately resulted in workers becoming unionized gave the area another association: “Bloody Harlan.”

As coal mining became more mechanized, the population declined and eventually the early coal companies moved out. Benham’s last coal mine closed in the 1970s.

Still, the city’s welcome sign along Main Street shows an image of a miner, the red and black I-H logo and this reminder: “The Little Town That International Harvester, Coal Miners, and Their Families Built.”

Eastern Kentucky has experienced steep job losses in the last 10 years as decades of mining have rendered the remaining coal expensive to extract compared with other regions. The industry also has faced competition from cheap natural gas, and struggled under environmental regulations that have increased the cost of burning coal.

Between 2015 and 2040, Kentucky’s population is projected to increase by about 10 percent from 4.4 million to about 4.9 million, according to the Kentucky State Data Center at the University of Louisville. But that growth will happen in metropolitan and adjacent areas; those further afield will continue to see declines. Harlan County, one of the poorest in the United States, is expected to lose 26.6 percent of its population, more than 7,000 people, by 2040.

The Tri-Cities are roughly four hours from the state’s largest airport in Louisville, and at least two hours from airports in Knoxville, Tennessee, and Lexington, Kentucky. Either trip requires getting off the interstate to travel mountain roads. Eating healthily at restaurants in the Tri-Cities is a challenge, especially on a Sunday evening when the sidewalks roll up around sunset. Housing options are limited.

“The good news is that the majority of tourism in the U.S. is drive tourism,” said Denise Miller, executive vice president of Indianapolis-based Strategic Marketing and Research Insights. “People are driving places and they like to get off the beaten path.”

But it helps to have a large city nearby, and the Tri-Cities don’t.

To attract tourists, rural areas also need hotels, restaurants and other infrastructure to serve them, said Nan Marchand Beauvois, senior vice president of the U.S. Travel Association. In many cases, they need to partner with county, regional or state organizations to make the necessary investments.

“When you’re looking at small rural destinations, what they do have is a lot of authenticity,” Beauvois said. “Their biggest point of differentiation is that they can talk to a true American experience.”

But, Beauvois said, “the region has to take a hard look at their product and make sure what they have is viable to a consumer.”

Kentucky’s Tri-Cities are trying to take advantage of what they’ve got.

The Kentucky Coal Museum is in the former company store in Benham. The Benham Schoolhouse Inn — once a high school for coal miners’ kids — was given a new life after Travis Warf, who worked as a dishwasher there as a teenager, began leasing the building from the county in 2016.

“I knew that it could be saved if the conditions were right,” Warf said of the Inn, whose website was built by miners retrained as coders at Bitsource, a Pikeville, Kentucky, software and website development company.

Using roughly $1 million in state and federal funds, including matching funds and in-kind donations, the Tri-Cities want to build a walking and bicycle trail in an old railway line that would wind through Cumberland, Benham and Lynch.

“That’s been a thorn in our flesh because we’ve been funded, and we can’t use it until we get that document,” Gothard said.

Meanwhile, residents say they are challenging coal companies because they want to bar surface mining on the slopes overlooking Benham and Lynch out of fear that it will spoil the view and taint the water.

But Gothard, a native of Cumberland, remains confident that the Tri-Cities, created by coal, can honor that history while moving away from it.

“A lot of people that come here, that used to live here, they leave very disappointed and they’ll say, ‘Well, it’s awful,’” Gothard said. “‘You know, it looks horrible. The buildings are all bad.’ And they leave. And I see hope somewhere. I haven’t been able to give up yet.”

This article by April Simpson originally appeared in Stateline, a publication of the Pew Charitable Trusts. Reprinted here (including grammar correction) with permission.