Note from Storm: Few restoration challenges are as crucial to our future as our rapidly-dying coral reefs. Despite large amounts of publicity regarding their global demise, little progress has been made in devising a solution.

While restorative technologies such as the one featured in the article below can contribute significantly to reef recover, that recovery won’t last if the underlying problems that killed the reef in the first place haven’t been addressed. The primary problem is the siloed nature of government agencies, scientific disciplines, and even non-profits/NGOs.

Much revitalization potential is wasted when renewal projects are done in silos. Watershed restoration here. Brownfields remediation there. Historic building reuse here. Infrastructure renewal there. There are 8 basic sectors of renewable assets and regenerative disciplines, first documented in The Restoration Economy (Berrett-Koehler, 2002). Integrating the renewal of natural, built, and socioeconomic assets produces efficiencies and synergies that are essential to tackling problems like reef restoration.

For example: An island nation trying to revitalize its commercial and recreational fisheries must restore damaged reefs. This requires restoring mangroves (which filter reef-killing sediments from terrestrial runoff), restoring watersheds, restorative farming practices, upgrading sewage systems, reducing boat and anchor damage, and more. Much more. My upcoming third book, Resilient Prosperity, suggests a variety of ways in which such multi-faceted revitalization can be affected.

In some cases, though, the original cause of the damage has already been reduced or eliminated, in which case reef restoration science and technology–such as Biorock–can come to the rescue. The poorly-researched BBC article linked to below fails to credit Prof. Wolf Hilbertz, who invented the Biorock technology. Nor does it credit Wolf’s partner, Dr. Tom Goreau, who conducted the workshops that taught the Gili Eco Trust about Biorock. Despite the failings of this article, I’ve chosen it for this issue’s Featured Article for very personal reasons. 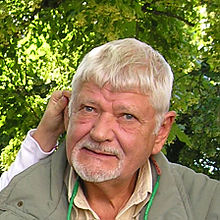 In the late 80’s, Hilbertz and Goreau were developing this spectacular restorative technology in Jamaica. They needed qualified divers to help them install their research projects under water, so I volunteered for a week. I credit that blissful experience with the birth of my interest in restoring nature for a living. Wolf, sadly, is no longer with us (this photo is from 2005, courtesy Wikipedia). But Tom is currently furthering the research in the South Pacific. This 2008 article describes his work.

The BBC reporter can be forgiven for not being aware that Prof. Hilbertz invented the Biorock technology: the folks at the Gili Eco Trust apparently want the world to think they invented it. I could find no mention of Hilbertz or Goreau on their website, and the head of Gili Eco Trust, Delphine Robbe, shamefully fails to mention them in her 2013 TEDx talk.

From the BBC article: In Indonesia, ecologists have created ‘biological rocks’ on the ocean floor using an ingeniously simple technology. Just metres off the beach, beneath the clear water, is a giant motorbike, sitting atop a big steel structure in the shape of a speedbump. It is covered in coral, and tropical fish dart under the handlebars and between the spokes of the wheels.

The structure isn’t an art installation, however; their frames tingle with electrical currents, which helps them create a rocky coating – which in turn becomes a nursery for coral reefs that have been damaged by human activity. When divers see injured coral, they move it to one of these structures to rehabilitate. The coral heals some 20 times faster, and has up to 50 times more chance of survival. The rehabilitated coral can often be astoundingly brilliant in colour and densely branched. Once healed, it is returned to the open sea. [photo credit: Gili Eco Trust]

See original article. [cover image of Biorock for this issue of REVITALIZATION by Matthew Oldfield.]