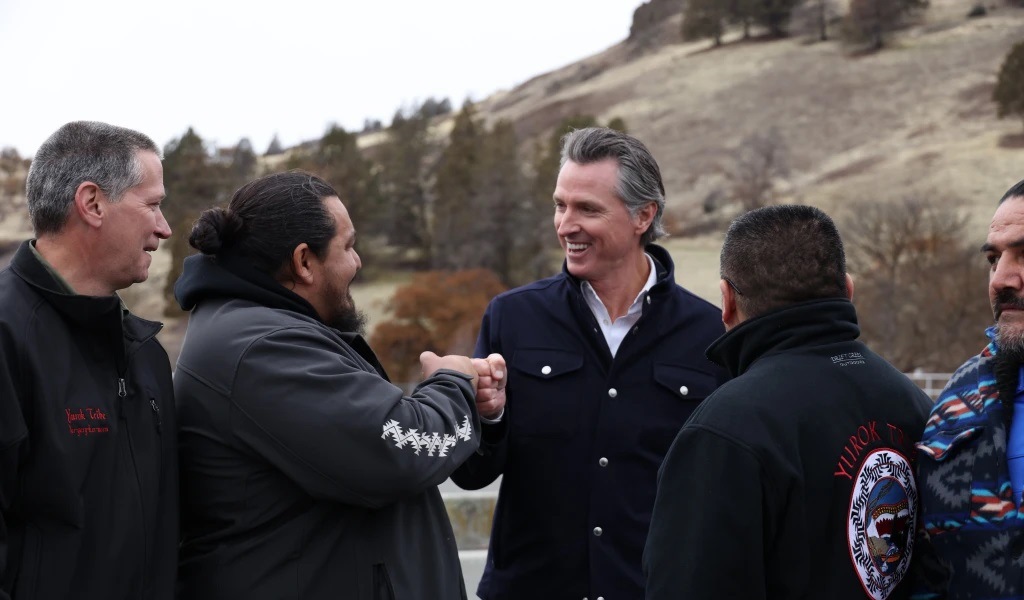 For many years, REVITALIZATION has been documenting the heroic efforts to de-engineer and revitalize the Klamath River of California and Oregon by removing four deadly dams that have blocked essential fish migration for over a century.

So, we’re overjoyed to announce that the final legal impediments to the largest river restoration project in American history have been overcome.

Gathering along the Klamath River in Siskiyou County on December 8, 2022, California Governor Gavin Newsom joined Oregon Governor Kate Brown, U.S. Secretary of the Interior Deb Haaland, Congressman Jared Huffman and leaders of the Yurok and Karuk tribes to celebrate final approval of a transformative dam removal project that will revitalize nearly 400 miles of the Klamath River and tributaries.

The celebration today at the Iron Gate Fish Hatchery marks the Federal Energy Regulatory Commission’s (FERC) final approval of a plan years in the making to remove four hydroelectric dams in California and Oregon, restoring access to hundreds of miles of habitat unreachable for salmon and steelhead for more than a century and revitalizing tribal communities and cultures for generations to come. 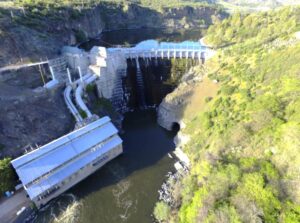 “Today we celebrate a historic victory for the health of the Klamath River and the well-being of all the communities, livelihoods and ecosystems that depend on this vital waterway,” said Newsom.

“We also celebrate the resilience and tenacity of the many partners who have advanced a powerful shared vision for this effort over 15 years to bring us to this moment. The incredible progress we have made proves that working together, we can forge a path forward through complex challenges to create a brighter future for all,” he added.

At the celebration, Secretary Haaland announced that four tribal water projects in Oregon and California’s Klamath River Basin will receive $5.8 million through the Department of the Interior’s Bureau of Reclamation to restore aquatic ecosystems, improve the resilience of habitats, and mitigate the effects of the ongoing drought crisis. The funding is made available through Reclamation’s Native American Affairs Technical Assistance to Tribes Program.

“Clean water, healthy forests and fertile land made the Klamath Basin and its surrounding watershed home to Tribal communities, productive agriculture, and abundant populations of migratory birds, suckers, salmon and other fish. But over the past 20 years, the Basin has been met with unprecedented challenges due to ongoing drought conditions and limited water supply,” said Haaland.

“The forthcoming dam removals – combined with millions of dollars in water and habitat resilience investments from the Biden-Harris administration – will help restore this once abundant ecosystem for the benefit of all its inhabitants. Stretching from the volcanic Cascades of Southern Oregon, through the Klamath Mountains and to the Pacific Ocean in California, the Klamath River is intrinsically linked to the health of its surrounding communities, businesses and environment. The Klamath Basin’s diverse communities include Native Americans, farmers, ranchers, loggers, miners and fishermen. The Klamath Basin watershed covers 9.4 million acres, an area larger than nine U.S. states,” she continued.

The natural wealth of the Klamath River has underpinned the physical well-being and cultural identity of Native peoples since time immemorial.

“For so many people, today is the culmination of a lifetime of work to restore the healthy waters and fish stocks of the Klamath Basin,” said Brown.

“It has taken a broad coalition working together to finally realize the removal of these dams, and that over 400 miles of the Klamath River will flow freely again. This is an incredibly important step forward on the path towards restorative justice for the peoples of the Klamath Basin, and towards restoring health to the river, as well as everyone and everything that depends on it,” she explained.

The Klamath was once the third-largest salmon producing river on the West Coast and teemed with salmon and trout in what seemed to be an inexhaustible supply before the construction of life-killing concrete dams beginning in 1918 to generate electricity blocked migratory salmon and steelhead from accessing more than 350 miles of critical river habitat.

“Thanks to Governor Newsom’s strong leadership, we are about to initiate the largest river restoration project in U.S. history,” said Joseph L. James, the Chairman of the Yurok Tribe. “I would like to express my sincere appreciation to the Governor as well as all of the water protectors and ceremonial practitioners in the Klamath Basin for fighting so hard to bring the salmon home.”

Today, even as other energy sources have minimized the need for electricity generated by the Klamath River, the dams remain and create slower moving, warmer river conditions that harbor fish-killing parasites and disease. Klamath River salmon populations – which sustained Yurok and Karuk communities since time immemorial – have plunged, compelling the tribes to curtail or cancel salmon harvests and cultural practices passed down from generation to generation.

“The Klamath Tribes are ecstatic about these dams being removed,” said Clayton Dumont, the Chairman of the Klamath Tribes. “We are grateful to Governors Brown and Newsom, to our downriver Tribal brothers and sisters, and to all who worked tirelessly to make this huge contribution to restoring our Basin ecosystem.”

When the original 50-year license to operate the four Klamath River hydroelectric dams expired in 2006, a coalition of tribal governments, state and federal agencies, community groups, fishery and conservation groups and local governments developed a series of agreements intended to resolve challenges in the Klamath Basin.

“Today’s celebration was well earned by the thousands of people who fought for clean water, healthy fisheries, and environmental justice for Klamath River communities,” saidKaruk Chairman Russell “Buster” Attebery. “I am grateful to everyone, from the youth to the elders, Governors Newsom and Brown, and the team from PacifiCorp who made this possible.”

Recognizing that resolving water supply, water quality and restoration issues hinged on removing all four dams, one agreement – later amended in 2016 – outlined the process to form a dam-removal entity now known as the Klamath River Renewal Corporation (KRRC) to take the necessary steps to secure FERC approval to remove the dams.

Parties led by the KRRC will take a number of pre-construction steps during 2023 to lay the groundwork to complete removal of the dams. The Copco No. 2 dam will be removed as soon as the summer of 2023 under the approved plan, with removal of J.C. Boyle, Copco No. 1 and Iron Gate dams planned during 2024. The four dams are located in Klamath County, Oregon and Siskiyou County, California.

Photos courtesy of the Office of Governor Gavin Newsom.