A stay at the Hotel Pulitzer Amsterdam is a historical discovery with a long and illustrious heritage dating back to the Golden Age. The hotel is set within twenty-five restored 17th and 18th century houses that once set the scene for prosperous business deals between trade merchants and played home to the decadent and flamboyant lives of Dutch aristocrats.

South African architect Jacu Strauss says, “I was nervous, being a designer not from here. Locals knew about the hotel and sort of adored it.” For the past three years, he’s shared responsibility for renovating this precious sliver of Dutch heritage. The Hotel Pulitzer is a 45-year old icon that comprises almost an entire block of Amsterdam’s UNESCO World Heritage zone.

The hotel opened in 1969 after the former owner, Peter Pulitzer—a relative of the Pulitzer Prize’s founder—and architect Bart Van Kasteel reworked a row of canal houses into a hotel near Dam Square. 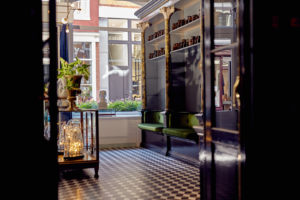 Finding your room is like finding your way through an M.C. Escher drawing. A labyrinth of staircases and corridors, ups and downs, are reminders that Pulitzer is a conversion of those brilliant canal houses for which Amsterdam is known, some 400 years old.

To understand the space, Strauss spent one night in each of the 225 rooms—none of which are exactly alike.