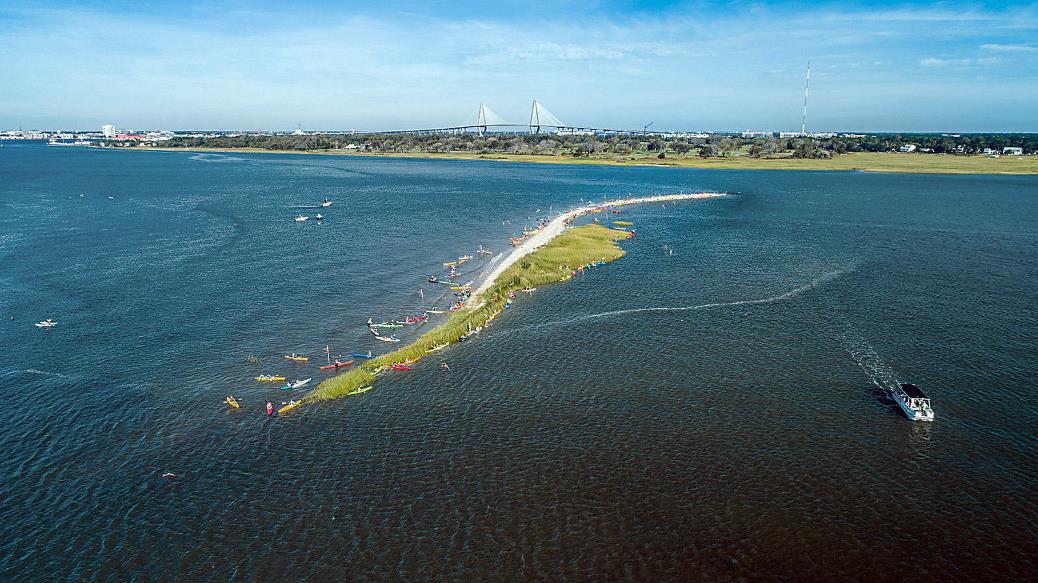 On September 13, 2021, after several years of planning and fundraising, the anticipation finally ended with the launch of restoration work on the Crab Bank Seabird Sanctuary, which is nestled in Charleston Harbor in South Carolina, between the tip of Sullivan’s Island and Patriots Point.

The U.S. Army Corps of Engineers (USACE) Charleston District announced that the contractor, Virginia-based Norfolk Dredging Company, had moved hydraulic pipe into the area for its aptly-named “Dredge Charleston” to begin pumping operations.

The restoration project is sponsored by the South Carolina Department of Natural Resources (SCDNR) and calls for the one-time placement of approximately 660,000 cubic yards of compatible material from the Charleston Harbor Deepening “Post 45” project.

When finished, the project will create approximately 32 acres of prime nesting habitat above mean high water for coastal birds. The project will benefit a wide variety of nesting and migrating seabird species that used the island before Hurricane Irma removed the last remaining bit of available nesting high ground in 2017.

Boaters and paddlers in the vicinity of Shem Creek and the Mount Pleasant Old Village shoreline will need to take extra precautions. This type of dredging operation is not typical in this popular and frequented section of the harbor and with it comes safety concerns. In addition to the dredge, there will be floating and submerged pipelines and auxiliary equipment that are hazardous to those who get too close to the construction zone.

In addition, residents and businesses could experience some noise and lights than are not normally present due to the proximity to the shoreline. Earthmoving equipment outfitted with lights and audible signals required by safety regulations will be mobilized and operate around the clock. While this may create some short-term inconvenience, the long-term benefits of a restored Crab Bank will be a major benefit to our community and the area’s fast-growing outdoor and nature-based tourism economy.

“The safety of our operations is of paramount importance for both the workers and the public,” said Lt. Col. Andrew Johannes, Charleston District Commander. “We are excited for this important work to begin, but it is challenging, and we want it completed as safely and expeditiously as possible. Do not approach the contractor’s equipment, do not land your watercraft on the restored footprint, and please be hyperaware of submerged and floating pipelines, especially when there is poor visibility.”

Planning and fundraising for the restoration of Crab Bank, which is owned and managed by the SCDNR, began in 2018. Federal grants and contributions raised by a coalition of non-profit groups, businesses and private citizens will fund the majority of the work. The opportunity to restore Crab Bank was made possible through a cost-share partnership between the USACE and SCDNR that was supported by a sustained public fundraising campaign organized through the S.C. Coastal Bird Conservation Program. Dozens of businesses and hundreds of individual small donors contributed to the campaign.

“This project would not have been possible without the amazing community support and assistance from Audubon South Carolina, the Coastal Conservation League, and Coastal Expeditions, as well as all of the individuals donors who contributed to this effort,” said SCDNR Director Robert Boyles. “Communication, fundraising and awareness have been key to the success that we hope to see this spring as birds return to the newly established footprint of Crab Bank.”

Construction is projected to take approximately two months to complete, and both agencies ask that boaters take notice of the activity from afar and be aware of their speed when in the surrounding areas. We want the project carried to completion in a safe manner for the contractors, as well as those fishing, boating and paddling in vicinity of Shem Creek and the Old Village shoreline.