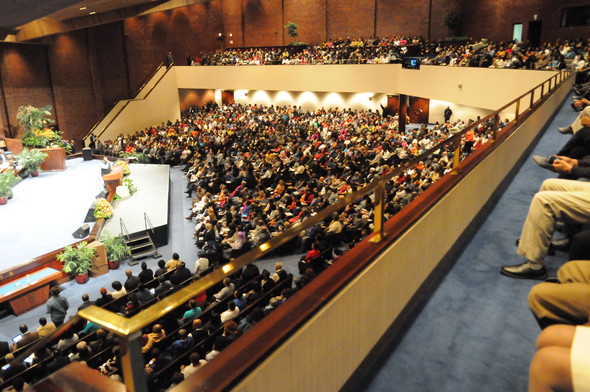 Like his charismatic father before him, the Reverend Byron Brazier, pastor of the Apostolic Church of God in Woodlawn, Illinois (a south shore Chicago suburb) knows how to pack the house and work the crowd.

More than 400 people showed up in the church’s banquet hall recently to talk about the prospect of a neighborhood renaissance — a painfully elusive goal for the long-idle South Side enclave but one that its backers say is within reach now that the Obama Presidential Center will be built next door in historic Jackson Park.

Not only does Dr. Brazier, as he is affectionately known among his flock, have longstanding ties to the Obama family, the University of Chicago and Mayor Rahm Emanuel — he serves as a leading point person for engaging the community in revitalization plans and was among a handful of civic leaders to meet with Obama last week — but his church is also the largest private owner of land that hugs 63rd Street and is prime for development near the library site.

That land, used as parking lots, sits within what will most likely be the most coveted development sites near the library. For all his enthusiasm for revitalizing the area’s economy, Brazier said that the church has no plans to sell or redevelop the land. “There is almost too much conversation for what actually gets done,” said Jake Sapstein, co-owner of the Robust Coffee shop.

Through an effort dubbed 1Woodlawn, in place for about 18 months so far, he is soliciting community ideas to be woven into a master plan for the redevelopment of Woodlawn. The next step is expected to be the launch of a not-for-profit agency to guide revitalization efforts in Woodlawn and the nearby South Shore and Washington Park neighborhoods.

“It is important that we plan for our own self-determination and not have someone else plan for us,” Brazier told residents at the recent community meeting.

The Network of Woodlawn community group, led by Brazier, is working with the city, the Obama Foundation, the University of Chicago, and the Washington Park Consortium to examine how South Side communities can benefit from the Obama library project.

To support that effort, Chicago Community Trust made a $250,000 grant to Chicago-based advisory firm Next Street to examine successful redevelopment projects around the country. The trust gave another $75,000 grant to the Arthur M. Brazier Foundation, also led by Brazier, for neighborhood planning services. The foundation retained architecture firm Skidmore Owings & Merrill to assist with that effort. And the Polk Bros. Foundation made a $45,000 grant to the Brazier Foundation to solicit community views.