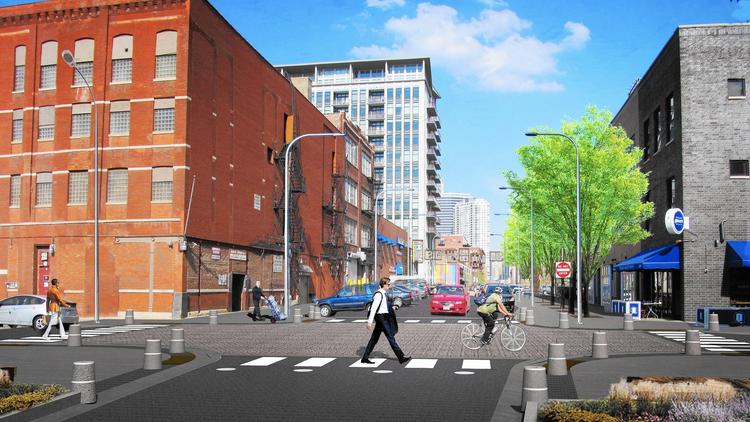 On February 7, 2017, the city of Chicago, Illinois announced that it’s about to give the Fulton Market historic district a $20 million makeover.

This pedestrian-friendly streetscaping project will add to the revitalizing energy that’s already in abundance in this charming old industrial neighborhood, which recently attracted a major employer in Google, and major tourism assets like the Ace Hotel along with some of the city’s most popular new restaurants.

Mayor Rahm Emanuel said that the Chicago Department of Transportation (CDOT) is set to break ground in March of 2017 on the Fulton Market Streetscape Project, a community-inspired modernization of the corridor that exemplifies Chicago’s heritage as a meat-packing hub for the nation and its future as thriving incubator for the tech economy.

“Fulton Market has played an important role in Chicago’s economic history and it has undergone a remarkable transformation in recent years,” Mayor Emanuel said. “Working closely with Alderman Burnett and community stakeholders, the City is making the necessary investments to modernize the existing infrastructure and restore this historic area to make it safer for pedestrians and suitable for the mixed-use economy of the 21st Century.”

The City Council designated the Fulton-Randolph Market District as a Chicago Landmark in July 2015. The streetscape plan, developed in cooperation with Alderman Walter Burnett (27th Ward) and community stakeholders, is designed to make the neighborhood more pedestrian friendly, while preserving its historic character. 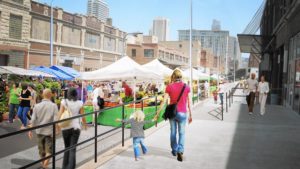 The Streetscape plan – which is designed to accommodate outdoor markets and to accentuate historic elements of the neighborhood’s architecture – was approved by the Landmarks Commission in 2015. A gateway arch was constructed at the entrance to the district on Fulton Market west of Halsted Street in 2015.

“The Fulton Market Streetscape Project, once completed, will provide a safer environment for pedestrians and also give the neighborhood a more vibrant appearance,” Alderman Burnett said.

The streetscape improvements include the full reconstruction of the roadway and installation of new ADA ramps and a flex-street design that has no curbs on some blocks. It also includes hook-ups for potable water and electricity to accommodate use as a farmers’ market.

“The Fulton Market Streetscape Project is a great demonstration of CDOT’s commitment to designing streetscape projects that build on a neighborhood’s unique features,’” CDOT Commissioner Rebekah Scheinfeld said. “Every streetscape project requires a fresh approach. We were very pleased to be able to work with community stakeholders to come up with a flexible streetscape design that reflects the evolving land use and preserves Fulton Market’s historic feel, while harnessing the creative energy that has blossomed in the neighborhood in recent years.”

Construction for the first phase of the $19.6 million project, from Halsted to Carpenter, will start in early March and is expected to be complete by summer 2018. The second phase, from Carpenter to Ogden, is currently in design and is scheduled to begin in early 2018.

Throughout the work, Fulton Market will remain open to motorists and pedestrians and access to businesses and residences will be maintained. In order to provide a safe construction zone, parking will not be allowed in the area of active construction. In addition, there will be periodic parking restrictions on some side streets.

Characterized by a rare ensemble of manufacturing and warehouse buildings, the Fulton-Randolph Market District encompasses 142 properties on the Near West Side, primarily along the 700 to 1000 blocks of West Randolph Street, the 100 to 300 blocks on North Sangamon Street, the 900 block of West Lake Street and 800 to 1100 blocks of West Fulton Market Street.

The area initially grew as Chicago’s main food market with the construction of a municipal market hall in the middle of Randolph, west of Des Plaines Street, in 1850. The area subsequently flourished as a wholesale market and distribution center for agricultural products from across the Midwest and West.

In addition to food marketing and processing, the district includes a number of historic manufacturing and warehouse buildings that reflect a broader pattern of industrial development that took place on the Near West Side in the late 19th and early 20th centuries.

It recent years, the neighborhood has developed as a thriving tech industry hub, exemplified by Google’s Chicago office. And it also boasts a hot restaurant scene.

The neighborhood got a revitalizing boost from the opening of the new, CDOT-constructed Morgan Street CTA “L” train station in 2012, which serves the Green and Pink lines.