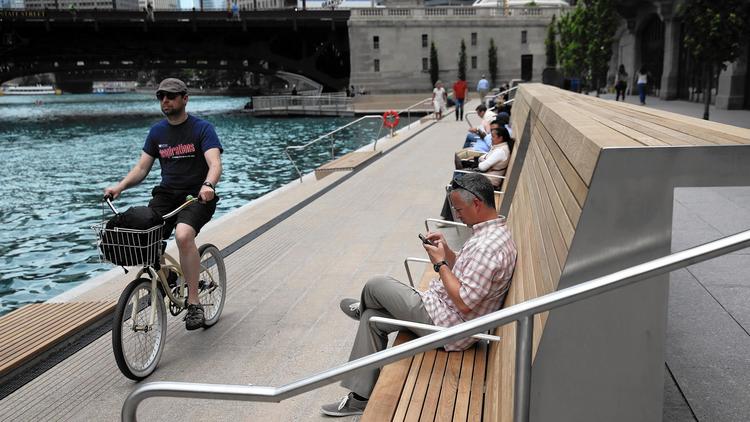 The latest stretch of this already-popular public space, expected to open later this week, consists of a monumental flight of steps between Clark and LaSalle streets that lets the city’s energy spill down to the south bank of the Chicago River.

Expect to see the people on those steps sunning themselves, munching on their lunch, holding hands and taking selfies. They’ll be taking in the river’s open-air theater of water, tour boats and skyscrapers. But they’ll be part of the play, too. People, after all, flock to public spaces to watch other people, not just the scenery.

Dubbed The River Theater, this new section of the Riverwalk follows two other just-opened blocks in what will ultimately be a $110million extension of this prime public space. When three more blocks are completed late next year, the project will create a continuous, 1 1/4-mile pedestrian and bike path reaching from Lake Michigan to Lake Street.

The latest stretch of the Riverwalk marks a significant step forward in achieving the ideal — voiced by former Mayor Daley and adopted by current Mayor Emanuel — of transforming the once-neglected downtown riverfront into a showcase public space that creates the equivalent of a second lakefront. Here, in bold strokes worthy of Daniel Burnham, Chicago is confirming and renewing its identity as a civilized metropolis.