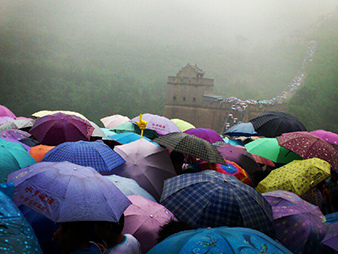 The plaza outside Shenzhen‘s Mass Sports Center looks like any you can find in Chinese cities. But if you look closely, you can still see a critical difference.

Unlike most infrastructures in China, the plaza here has no drains. When rain falls lightly, the water either filters down to the underground through permeable pavements or is soaked up by gardens designed to catch rain. Almost no rainwater flows into street gutters around this plaza. During a period when many big cities — most recently Houston — are experiencing extreme rainfall and major flooding, the innovations show in a small way the kinds of preparations that may be needed.

The plaza is one of the showcases for China’s ongoing efforts to redesign its cities. The country used to rely on drainage systems to remove rainwater. But as extreme weather events increase, Chinese city planners have begun to give equal attention to new climate-resilient urban designs.

Experts say that climate change has played a role in the increase of urban flooding, producing more rainfall during shorter periods. Besides that, rapid urbanization has outpaced stormwater removal. Although China’s drainage networks extended to reach 288,838 miles as of 2013 — 20 times longer than that of 1981 — it still can’t catch up with the fast expansion of Chinese cities.

At the same time, many cities in China face a serious water shortage. The need to confront both water shortages and urban flooding has created a huge headache for Chinese city planners. But it also has became an opportunity to introduce a new urban design.

Known as “sponge cities,” the new design aims to build up infrastructure to collect excess rainfall and integrate flood control in urban planning. As a result, cities will not only be able to deal with too much water, but also reuse rainwater to ease their thirst when there is not enough water.