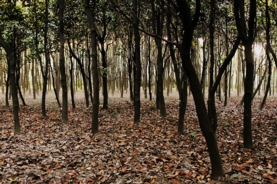 China’s Green Great Wall—formally known as the “Three-North Shelter Forest Programme“—is regarded by some experts as the largest ecological engineering project on the planet.

Since 1978, at least 100,000 square miles of forests have been planted by Chinese citizens across the arid north, in an effort to hold back the creeping Gobi Desert. Once the project is completed in 2050, a massive belt of trees will stretch from northwestern China’s Xinjiang through several northern regions to the country’s northeastern part, Heilongjiang province.

The introduction of the Green Great Wall, however, has doubters in the scientific community. Some scientists worry that planting trees where they do not grow naturally may do more harm than good, soaking up large amounts of valuable groundwater. Others question the mortality rate of trees planted there and whether these trees would negatively affect grass and shrubs, which in general are more resistant to drought and more effective at erosion control.

Note from Storm: Some folks refer to China’s Great Green Wall as a reforestation project, since much of the area was forested prior to (mostly-human-caused) desertification. But a monoculture of same-age trees (especially non-native species) is no more a forest than a field of corn is an ecosystem. The scientific term for this is “afforestation”, but even that is misleading, since it contains the word “forest”. It’s possible that–over centuries–the Great Green Wall could evolve into a forest of sorts. But for now, let’s call it what it is: a tree-based (as opposed to a concrete wall, for instance) engineering project to hold back the Gobi Desert.