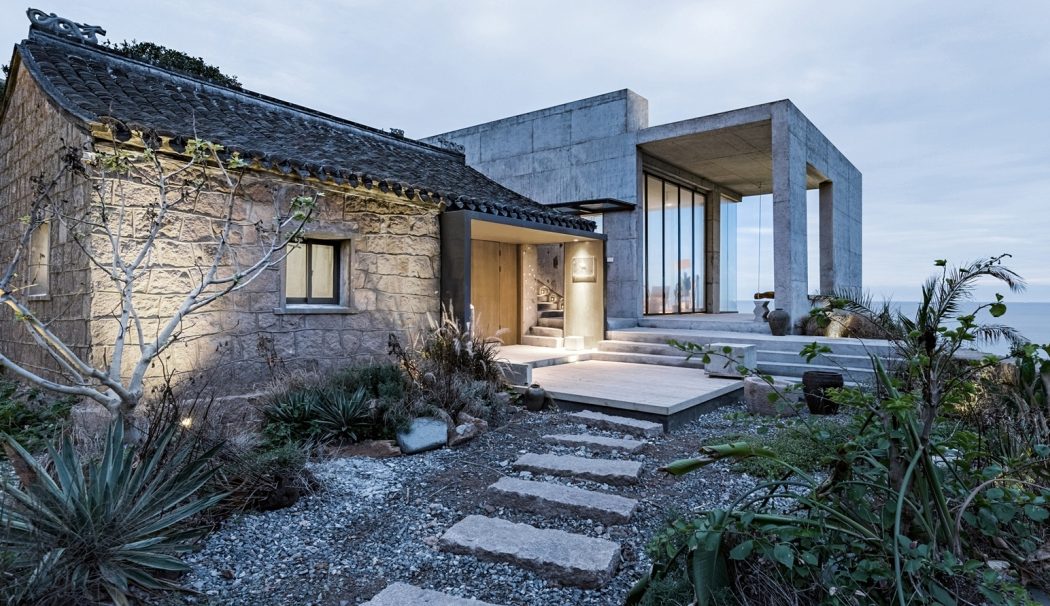 Just off the coast of Zhoushan, China, on one of the largely-abandoned Zhoushan Islands, 70% of the houses in one village are vacant, hollow shells. 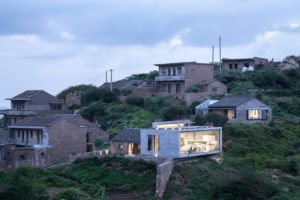 But these stone structures—with their building materials sourced from the local area—are quite solid, with a lot of structural integrity. Some of the roofs have partly collapsed, but that can be expected, given the technology and material conditions of the time they were built.

Two of the houses near the beach have been unoccupied for 70 years, but have now come back to life and modernity in a lovely example of historic restoration and modern renovation/expansion. The two sites have a four-meter difference in elevation, but they both face the south, with their gables facing the east and west. This orients them toward the sea, while protecting them from typhoons, which is why these two were chosen to be rehabilitated. 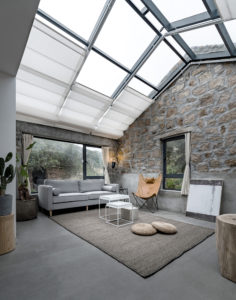 Everything about renewing these two eminently-restorable houses begins and ends with interior design.

Between a span of three to five days, there needs to be a balanced consideration given to the local architecture, interior structures, landscape, and other spaces. Construction will last less than 40 days, so it was a real challenge to set up for filming without disrupting local businesses.

There are only a few hundred inhabitants on the island, so all living and manufacturing supplies come from the mainland, providing the architect—Canadian design firm Evolution Design—with a uniquely challenging situation.

With the highs and lows of the terrain and picturesque views of the sea, the design focus here would have to be more on how to capture multi-angled views from inside the house looking out rather than merely how the house itself looks like.

The house incorporated into the new design can be found on the eastern side of the collection of old houses lowest in altitude, where the only available patch of land facing the sea can be found, and it serves as a precise remediation of the lack of adequate depth and width the old houses have to carry out modern social gatherings.

The new house is built with reinforced concrete and has a perfect match in terms of both structure and space while still remaining free of excessive decoration. Concrete was specifically chosen here to help the house withstand erosion stemming from the harsh sea climate. 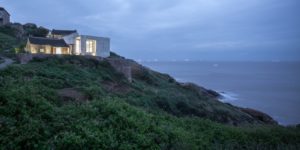 The entire structure is composed of bedrooms renovated from the two old houses plus a studio converted from an old kitchen with collapsed roof that is now replaced by a glass ceiling.

There is also a newly built reinforced concrete “box” facing the sea connecting two courtyards both on the upper and lower levels, respectively, to accommodate the upstairs master bedroom and two downstairs guest rooms. The new “box” space therefore serves as the common area for social and recreational activities.

The “new box” on the site is made to be inconspicuously retrusive. In the presence of the time-honored beauty of 70-year-old houses and the supreme natural landscape, any fresh elements seem unnecessary and charmless. That’s why the new structure is meant to compliment and respect the local area, rather than hog the spotlight. 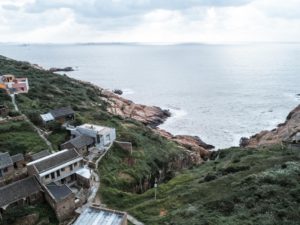 This essentially underplays the structure’s full potential. Here, there is a balance between the new and old and understanding and harmony, and here, modern-day “aesthetics” and old “remains” thrive in co-existence.

Looking at the overall layout, time has made the two houses part of the old village. To the local villagers, the new box may seem obscure or even negligible. Only when you walk into the courtyard from the old street, will you discover the secrets of this new space.

The climactic, 270-degree seascape is saved for last when considering spatial sequencing, but when observed from above the sea, the design seems to be a new organism facing both today and tomorrow.