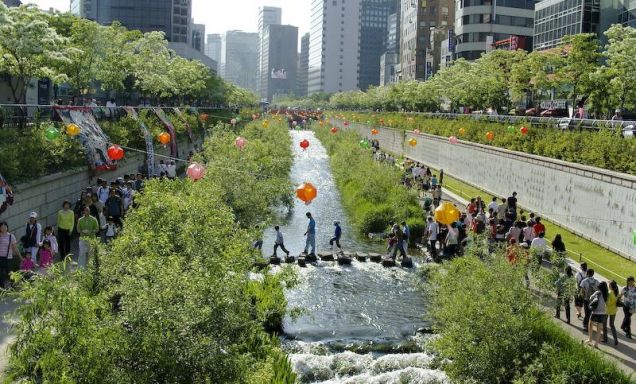 Note from Storm: Those of you who have read my books or heard my talks know that the removal of badly-planned urban freeways has been a favorite subject of mine for over a dozen years. There is no more powerful or efficient way for cities to renew, repurpose, and reconnect their natural, built, and socioeconomic assets. So, I’m always happy to see articles like this one by Jesse Herman, titled “Cities are ripping out freeways to build natural spaces without affecting traffic“. In it, he says:

Many freeway systems were overbuilt in an auto-obsessed era, only to realize later that cities are actually healthier and safer without them. Like freeway cap parks, which hope to bridge the chasms through severed neighborhoods—Boston’s Big Dig is a great example—freeway removal projects try to eradicate and undo the damage wrought from highways, while creating new, multifunctional shared streets that can be utilized by transit, bikes, walkers and yes, even cars.

Okay, you’re thinking, but where do all the cars go? It turns out that when you take out a high-occupancy freeway it doesn’t turn the surface streets into the equivalent of the Autobahn.

A theory called “induced demand” proves that if you make streets bigger, more people will use them. When you make them smaller, drivers discover and use other routes, and traffic turns out to be about the same.

Don’t believe it? Check out these freeway removals in cities all over the world and see for yourself.