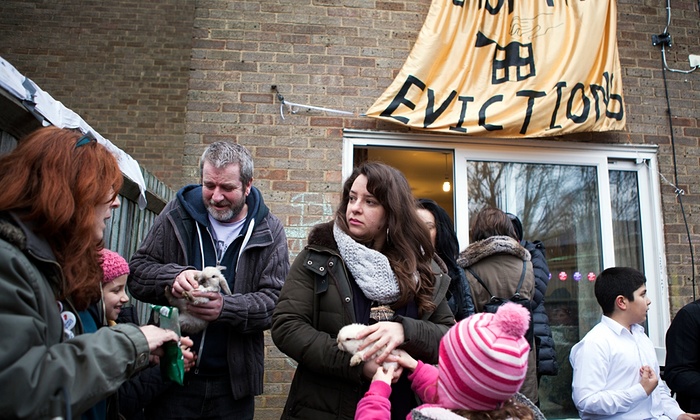 According to some residents, they involved people being dragged screaming out of their homes in February and then offered alternative accommodation as far away as Essex and Luton.

Over the weekend, I visited the estate, which has since become a site of protest for former residents. Their campaign group Sweets Way Resists was refurbishing one of the empty homes to a habitable condition using nothing but a handful of volunteers and £300 in donations.

Calling the refurbished house “The People’s Regeneration Show Home”, the campaigners said: “Regeneration doesn’t have to be a horrendously expensive code word for social cleansing; it can be a collective, sustainable and affordable way for people to come together and improve their homes and their community.”

Regeneration has evolved as a concept over the last 15 years. In 1998, New Labour launched its flagship scheme, the New Deal for Communities. For that project, the purpose of regeneration was to “reduce disadvantages in the poorest areas by focusing on four issues: unemployment, poor health, crime and education.”

Now, particularly in London, the private developers’ muzzles are off, and regeneration has become little more than a euphemism for taking advantage of a property boom by turfing the poorest out of their homes and building luxury flats, making a small amount of people very wealthy in the process.