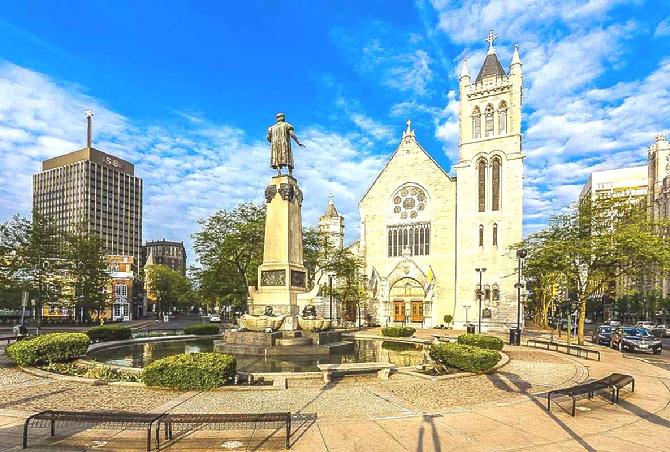 The roof of the Cathedral of the Immaculate Conception in downtown Syracuse leaks so badly maintenance workers have to mop up puddles off the floor whenever there’s a heavy rain.

Decades of wind, rain and freezing temperatures have worn the face off St. Joseph on a statue looking out on Columbus Circle from above the cathedral’s front door.

And the sound system in the Catholic church is on its last legs. It conked out three years ago during a crowded St. Patrick’s Day Mass.

“We had a full church, no sound and people had to scream,” said Msgr. Neal Quartier, the cathedral’s rector.

Parishioners of the cathedral and other Catholic churches throughout the seven-county Syracuse diocese have rallied to support a fundraising campaign to pay for a $12 million top-to-bottom renovation of the 131-year-old cathedral in 2017.

Archimedes Russell was the architect commissioned to expand the new Cathedral. He designed a new sanctuary and bell tower. For this purpose, the Parish purchased the La Concha Turkish bath house, demolished it and built the Cathedral’s sanctuary.

Renamed The Cathedral of the Immaculate Conception, the new cathedral was consecrated in 1910. For the dedication, Pope Leo XIII gave Bishop Ludden a brick taken from the Holy Door at St. Peter’s Basilica in Rome.