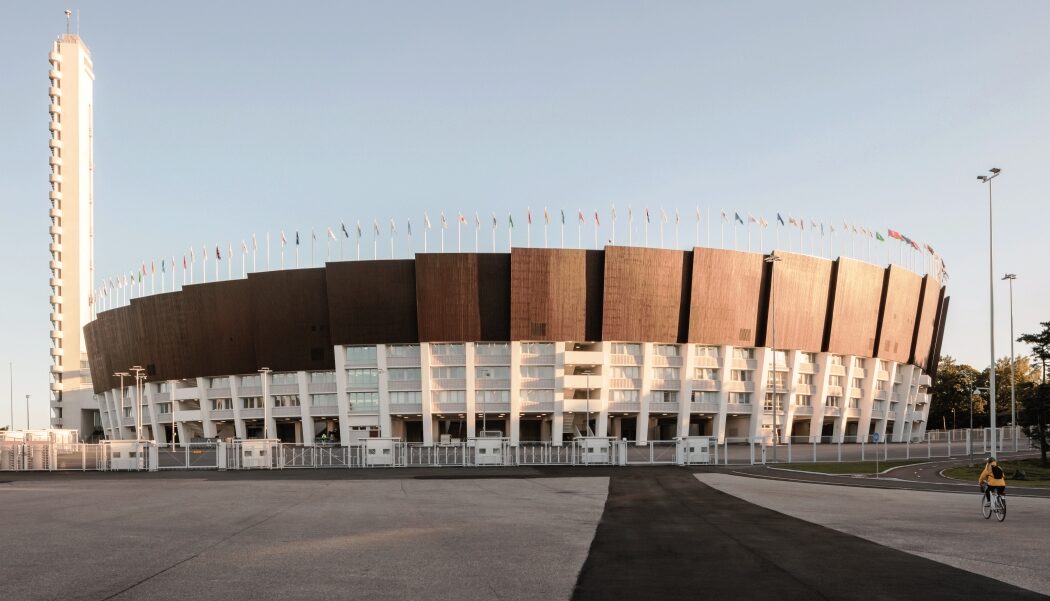 2022 marks 70 years since the 1952 Olympic Games in Helsinki, Finland, and the 10th anniversary of Helsinki as the World Design Capital in 2012.

Throughout, the city has prioritized the reuse and revitalization of its original Olympic architectural landmarks, offering improved cultural spaces that contribute to the evolving character and shape of the city, whilst respectfully preserving the national value of each site.

Although the smallest city to have hosted the summer Olympics, Helsinki’s functionalist structures were conceived as versatile recreational venues and have been preserved to become modestly emblematic of successful circular design 70 years later.

With functional design and sustainably-driven innovation as core priorities for Helsinki’s future, the city and the partners undertaking renovation work to the heritage sites have echoed contemporary architects and designers across the world using innovative design to renew rather than demolish existing buildings as the city grows.

Hanna Harris, Chief Design Officer, City of Helsinki, commented: “Helsinki’s Olympic landmarks are a source of great local and national pride, and are buildings that many of us have either grown up recognizing as part of the city’s fabric, or fondly remember for their original purpose.”

“It is therefore of particular importance that we maintain and protect the legacy of these historic buildings, while reconceiving new uses and undertaking architectural updates that bring new life to former Olympic sites as sustainably as possible,” she added. 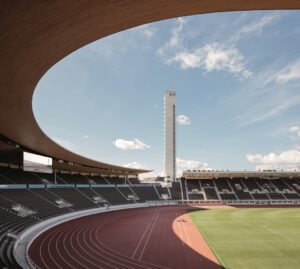 Built in 1938 and intended to host the 1940 Olympic Games before its cancellation, the Helsinki Olympic Stadium, is an iconic landmark of independent Finland and Finnish functionalism.

The stadium is the result of an open architectural competition held in the 1930s—a favored design process in Helsinki—which was won by Finnish architects Yrjö Lindegren and Toivo Jäntti.

Becoming a crown jewel of 1930s functionalist concrete architecture in Finland, and at the heart of the 1952 Games, the Stadium has since been re-envisioned as a multi-purpose sporting and events location.

The refurbishment of the stadium, completed in 2020, respects the original architecture by preserving the angular concrete facade and original structure of the design.

Additional features were added in a 20,000 square meters underground extension, and include sports facilities, logistical spaces, technical spaces, and an indoor running track. In addition, K2S Architects + Architects NRT improved public safety and comfort by adding new entrances to the stands, and a canopy to cover the stands almost entirely. 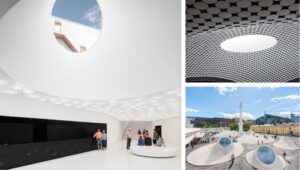 Originally designed as a temporary building to serve visitors to the Olympic Games, the Lasipalatsi (“glass palace” in Finnish) once housed commercial premises, restaurants, and a cinema. 2018 saw the completion of a five-year, €50 million project by Helsinki-based architecture firm JKMM to restructure the Lasipalatsi to house the Amos Rex Art Museum, amongst other public spaces.

At the heart of the museum, 13,000 cubic meters of rock have been excavated to create a world-class gallery space. The gallery is topped with a series of domes and skylights, which above-ground create a series of mounds that articulate the surface of Lasipalatsi Square. The mounds generate a playful landscape which invites residents and visitors alike to interact with the space, and are often used as grandstands, stages, or platforms for public events.

A program of creatives are invited to also make use of this public space to produce site-specific work, such as The Nest, a sculptural installation by Japanese artist Tadashi Kawamata (May 7 – September 4, 2022), in which reclaimed materials surge over the roof of the Lasipalatsi building and up the courtyard chimney.

Built in 1952, Helsinki Airport saw nearly 2000 flights pass through during the Olympic Games, with guests including royalty, such as Dutch Prince Bernhard and Prince Philip of the United Kingdom, as well as Olympic sports teams from around the world.

Designed by Helsinki-based practice ALA Architects, the newest terminal extension aims to streamline the user experience and bring excitement back into air travel, with new departure and arrival halls that from 21 June 2022 centralize all flights under one roof, in addition to the introduction of next-generation security control and a new multimodal travel center.

New stores enliven the visitor experience such as Balmuir and Marimekko stores, a variety of restaurants, and the beloved Moomin Shop.

A central feature of the airport extension is a cross-laminated timber ceiling, made up of 500 unique pieces of Finnish spruce which slot together to form a feat of carpentry in an undulating structure that appears to float overhead. The terminal extension reflects a purposeful dedication to Finnish design and nature through the use of predominantly domestic materials. A freeform installation titled “Luoto” echoes the rocks and islets seen across the national landscape as a natural diorama featuring trees, plants, and stones as a memorable experience for visitors.

The redevelopment is due to complete in 2023, when a new baggage claim hall will be put into service.

Designed by Yrjö Lindegren, also responsible for the Olympic Stadium, the Serpentine House in the Käpylä district of Helsinki is a highlight of Finnish architecture. The building of 189 residential flats was first constructed as part of the Olympic Village in 1951.

The project to renovate the southern residential building ran from 2016 to 2018 and was led by architect Mona Schalin of Kati Salonen and Mona Schalin Architects. Serpentine House subsequently won the 2019 Finlandia Prize for Architecture, awarded annually by the Finnish Association of Architects (SAFA).

Despite its total length of 287 meters, the design succeeds in avoiding a rigid and austere feel by setting the residential units in a fan-like arrangement that creates a series of private and sheltered garden spaces. The design team also worked in close collaboration with the staff at Helsinki City Museum and the city’s planning and building control departments to propose a sustainable refurbishment.

The majority of the original windows and kitchen fittings were preserved and repaired and, significantly, the original natural ventilation system was retained. This energy efficient system will continue to reduce maintenance costs and prevent indoor air quality problems in the years ahead.

The City of Helsinki continues to demonstrate commitment to innovative, sustainable design and the transformational potential of architecture in shaping the city as ways in which to further improve its maritime character, create livable spaces, and promote active citizenship. Later in 2022, an Architecture Policy will be unveiled that formalizes the city’s relationship to architecture across landmarks, everyday buildings, coastal connections, and urban renewal.

Also in 2022, the design winner of the Makasiiniranta quality and concept competition will be announced, cementing plans for Helsinki’s most high-profile upcoming development that will house the new Architecture and Design Museum.

Instituting a new chapter for the city’s South Harbour—the last old harbor area to be transformed for public use in Helsinki, including the protected Olympic Terminal—the development of the 83,000 sq. ft. historic site will reconnect the expanding pedestrianized city centre with the shoreline as a new culturally-intensive destination.

A separate architecture competition for the Architecture and Design Museum is set to launch during 2023.

Unless otherwise credited, all images courtesy of Tuomas Uusheimo / City of Helsinki.