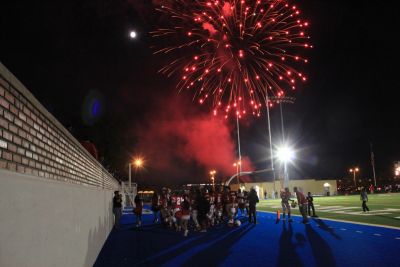 Atwood Stadium sits on a beleaguered patch of land in Flint, Michigan, that stretches along University Avenue between downtown and the campus of Kettering University.

The historic stadium, opened by the city in 1929, served as the showcase arena for the nation’s leading lights. Presidents Franklin D. Roosevelt and John F. Kennedy spoke there. Olympic medalist Jesse Owens cast awe on the track with his physical prowess. The UAW brought 9,000 union workers to the bleachers for a vote on a crucial national strike in 1946, and The Who had music fans on their feet.

But most importantly, Atwood Stadium was a neighborhood anchor, a place where football games were played between high school teams with towering talent. On Thanksgiving Day in 1950, no fewer than 20,600 spectators showed up for a tussle between Flint Central and Flint Northern.

“It had 11,000 seats and only 300 parking spots,” says Kettering President Robert McMahan. “It was designed from the very beginning to be in the community, where people walked to games or parked in the neighborhoods.”

But as Flint’s fortunes dwindled, so did Atwood’s. It wasn’t lack of love, but lack of money that led to exposure and disrepair crumbling the stadium. No one, it seemed, could hold the decrepitude at bay. Atwood was stilled. It became largely a place of memory, of past-tense stories, rather than where life was lived.

Until now. In an unlikely turn of events, the City of Flint transferred ownership in 2013 of the stadium to Kettering — a private cooperative technical college founded as the School of Automotive Trades a decade before Atwood opened. They did it even though the school itself doesn’t have a football team. Over the following two years, the school raised funds for an extraordinary renovation of Atwood.

The stadium re-opened with fanfare on August 27, 2015 with a classic game between two longtime Flint public school rivals. About 3,900 people attended, and afterward, fireworks broke brightly against the night sky.